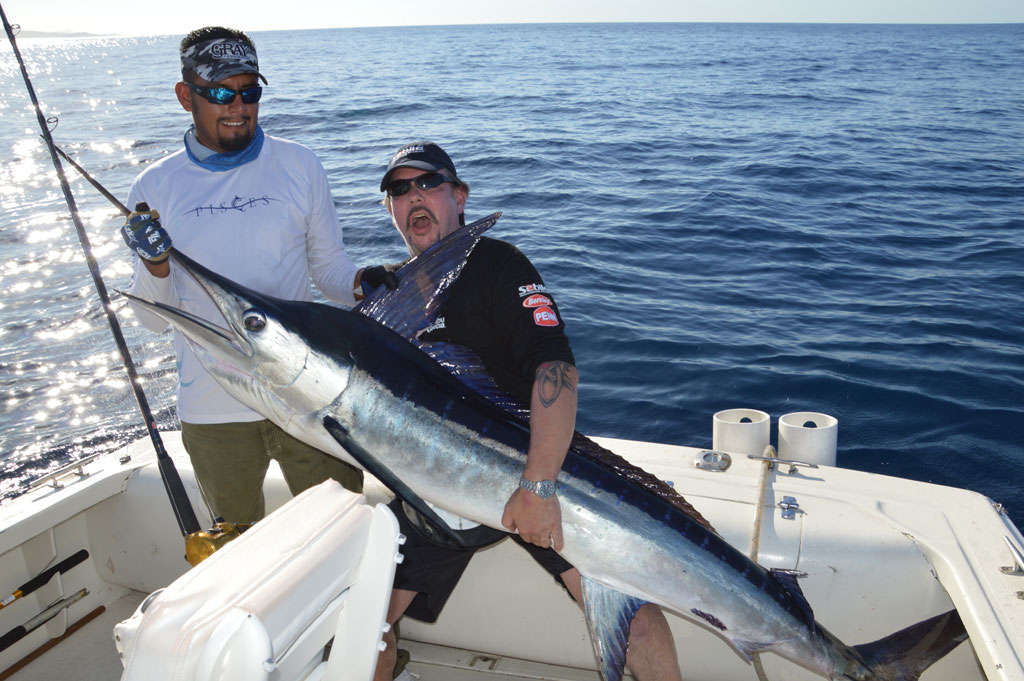 BILLFISH: A bit of an up and down week for billfish as we transition into what is really our fall. Full moon during this past week slowed things down for a few days, plus some changes in the water temperatures and currents, nevertheless sixty five percent of boats did catch striped marlin. Pisces Tracy Ann had the highest scoring marlin day on November 18th, when they released six stripers for Bruce Tysor from Sidney Iowa. They fished in the Los Arcos area and caught their fish on live caballito. Fearless was not far behind with five striped marlin released plus six dorado near the lighthouse for Victor Carrera & friends from Dallas, Texas. Pisces Rebecca had back to back four marlin days with a half dozen dorado as a bonus each day for Aline & Stefan Apostol from Rumania & Marina Sedic & Mike Gormley from Vancouver, Canada. Other boats caught from one to three marlin, with catches predominantly on the Pacific on live bait; the nice thing was that nearly every boat was able to pick up something for the table as well. Pisces anglers caught a total of 113 striped marlin this week all released.

OTHER SPECIES: Dorado remains the top gamefish in Cabo right now with eighty four percent of our charters catching this species in the 10 to 30 LB class. Depending on the location an average catch could be from one to ten dorado with our top producer being Bill Collector for angler Mark Chiavetta with twenty one fish in a day (ten released) & friends. Our total dorado count this week was 434 fish. Tuna catches were super slow with just six percent of charters even able to find them and when found the catches were one or two fish and if you were lucky perhaps six, football size fish. Several wahoo were caught with sizes ranging from 30 to 45 LBS. We are starting to see more activity on the inshore fishing with rooster fish, jack crevalle, sierra and skipjacks caught – a sure indicator of changing water temperatures.

WEATHER CONDITIONS: We did not have perfect weather which we expect at this time of year. Skies were partly cloudy and seas were choppy on several days.