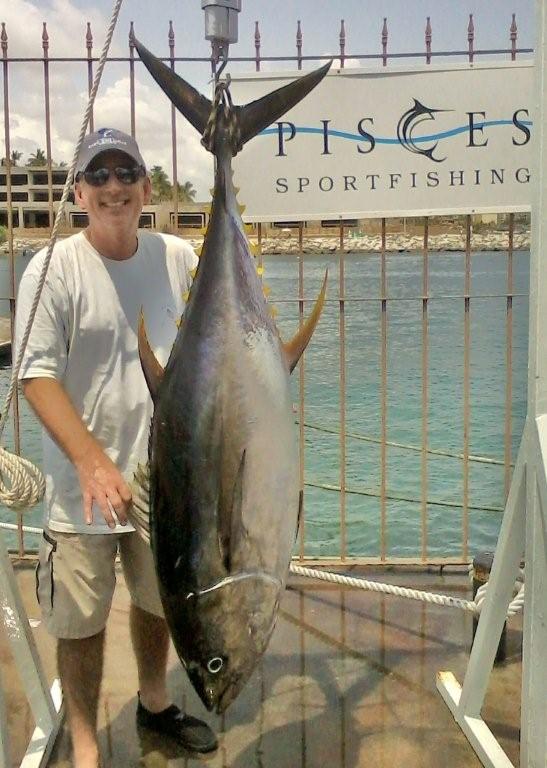 BILLFISH: Another stunning week of fishing in Cabo which gave us a near perfect record of every boat catching fish – however, we had a few anglers that wanted to fish exclusively for large yellow fin tuna (probably remembering that the all tackle world record for this species was caught this time last year) but unfortunately drew a blank. On the other hand though we saw a very high hook up rate for marlin and sailfish leading to a catch rate of eighty six percent. Funny thing was when multiple billfish days were had it tended to be sailfish, rather than the stacks of striped marlin we are accustomed too. That said, striped marlin was still the most widely caught fish, with catches the week being of one or two fish plus a whole slew of dorado. One of the most outstanding catches this week was that of Pisces La Brisa on September 28th, when they caught and released a 350 lb. black marlin, a sailfish and boated a 60 lb. wahoo -the marlin took a black and silver lure. The lucky anglers were Thomas Gillis from Boston, who was fishing with Richard Cantares, Edward Coniff & Ron Ledoux. Of equal importance if not a tad more, was the catch of Pisces Bill Collector this same day who released a 300 lb. blue marlin, four sailfish & four dorado for Sherif Ammar, Hadi Hasson & Burak Ozgur from Irvine, California. The location for these catches was between the 95 & 11.50 spot on the Cortez side. As mentioned above, we are having a bumper sailfish year, with multiple catches in a days’ fishing. Top boat was Pisces Yahoo with five released on live bait outside the 95 spot for Keith & Rhonda Philpott from Kentucky fishing with Brad & Patricia Brock from Whitney, Texas. There is barely a week that goes by when Tracy Ann does not get a mention and this week she make the report again for releasing a blue marlin around the 250 lb. mark for G.W Taylor from Lindale, Texas, who with his group, went on to catch twenty one dorado & a tuna. There were only two boats that had quadruple marlin days, Pisces 28 ft. Adriana who had the four billfish plus seven dorado for John David & Mark Mikulka at the Lobera. The other was C Rod with four marlin, six dorado and a wahoo for Mark Olsen & John Mardesich from St. George, Utah. Just beating these two for most striped marlin was Halcon who released five at Golden Gate for Kingle Wang from New Jersey. Live bait was the ticket for striped marlin & sailfish, whilst the bigger fish, the blues & the black took lures. Pisces anglers caught a total of 130 billfish this week, breaking down into 80 striped marlin, 47 sailfish, 2 blues & 1 black.

OTHER SPECIES: Dorado were out in full force this week giving anglers plenty of chances to load up on one of the top eating fish. Catches ranged from one to twenty six fish, resulting in a catch rate of eighty three percent, so chances were slightly less of finding dorado than a billfish, but boy when found, double digit numbers were common giving us a total of 689 a big number, but a good portion were released to comply with catch limits. Dorado were found throughout our whole fishing area but catches were better on the Pacific between the Old Lighthouse & Golden Gate, with the Margaritas area one of the hot spots. The dorado are taking live bait and lures, not picky about the colors but it is common knowledge that they like green colors, perhaps because they are known to be cannibalistic. Size on the dorado was between 10 and 30 lbs. Tuna catches were on the slow side with just fourteen percent of bots catching between one and ten fish, usually small school fish around 15 to 20 lbs., however Halcon, the boat that caught the 266 lb. last week, caught a very nice 150 lb’er in front of La Bomba for Cristian Alcala from Pico Rivera, Ca. – This fish took a green lure. Just a few wahoo this week, with 35 lbs. the average weight, the only larger one was 60 lbs. aboard La Brisa. Inshore just a few skipjacks and beach fishing with Wesley produced roosterfish and jack crevalle.

WEATHER CONDITIONS: Mostly good, weather had cooled off at night; seas mostly calm some whitecaps on both sides in the afternoon.