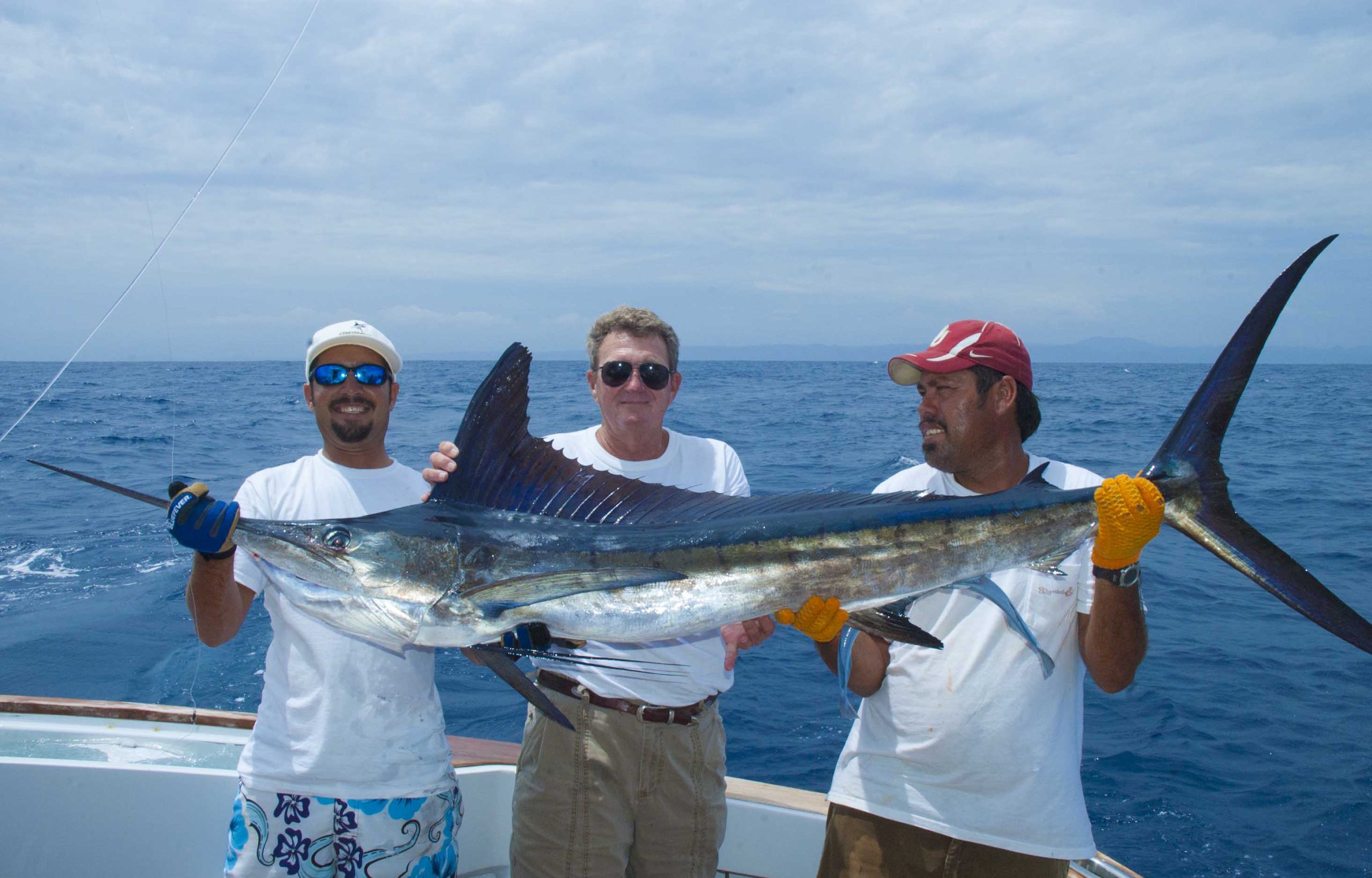 BILLFISH: We had a fabulous week here in Cabo and that was even with the port being closed for two days due to big seas caused by Hurricane Marie that was out in the Pacific. The darker moon in conjunction with more stable water temperatures  was exactly what we needed to get the bite to pick up and boy did it pick up.  All but a few of our boats caught a billfish this week, usually with the bonus of eating fish too. We had just one boat draw a blank and that was because the anglers got sea-sick and asked to come back in. Striped marlin picked up the pace and regained their place as the most abundant billfish in Cabo, followed by good amount of sailfish and a couple of small blues. Cody Brunette, Jacob Lewis from & friends from Midland, Texas had an outstanding day aboard C Rod on August 24th when they caught and released both a blue and striped marlin a 45 lb. wahoo and eight dorados close to Migrino. This same boat did very well a couple of days later when they caught and released a sailfish, two striped marlin, seven dorado and six tuna near Las Margaritas for John Platon and friends from Gig Harbor, Alabama. La Brisa slammed it this day as well, with two sailfish, two striped marlin, three dorado and a tuna for the Alfords & Pollards from Tyler, Texas. Foster Sayles from Galveston fished aboard 28 ft. Adriana and had great success releasing three striped marlin, one sailfish and a dorado at Los Arcos and Margaritas. Flora T newcomer to the fleet, again proved their worth, making the fish report again with a blue and striped marlin released and two dorado boated for Matthew Small, another Texan.  Last but not least La Brisa had a notable catch for Ashley Griffin & party from Houston,  with three striped marlin released and seven dorado. Pisces anglers caught a total of 83 billfish this week consisting of 36 striped marlin, 18 sailfish and 2 blue marlin. 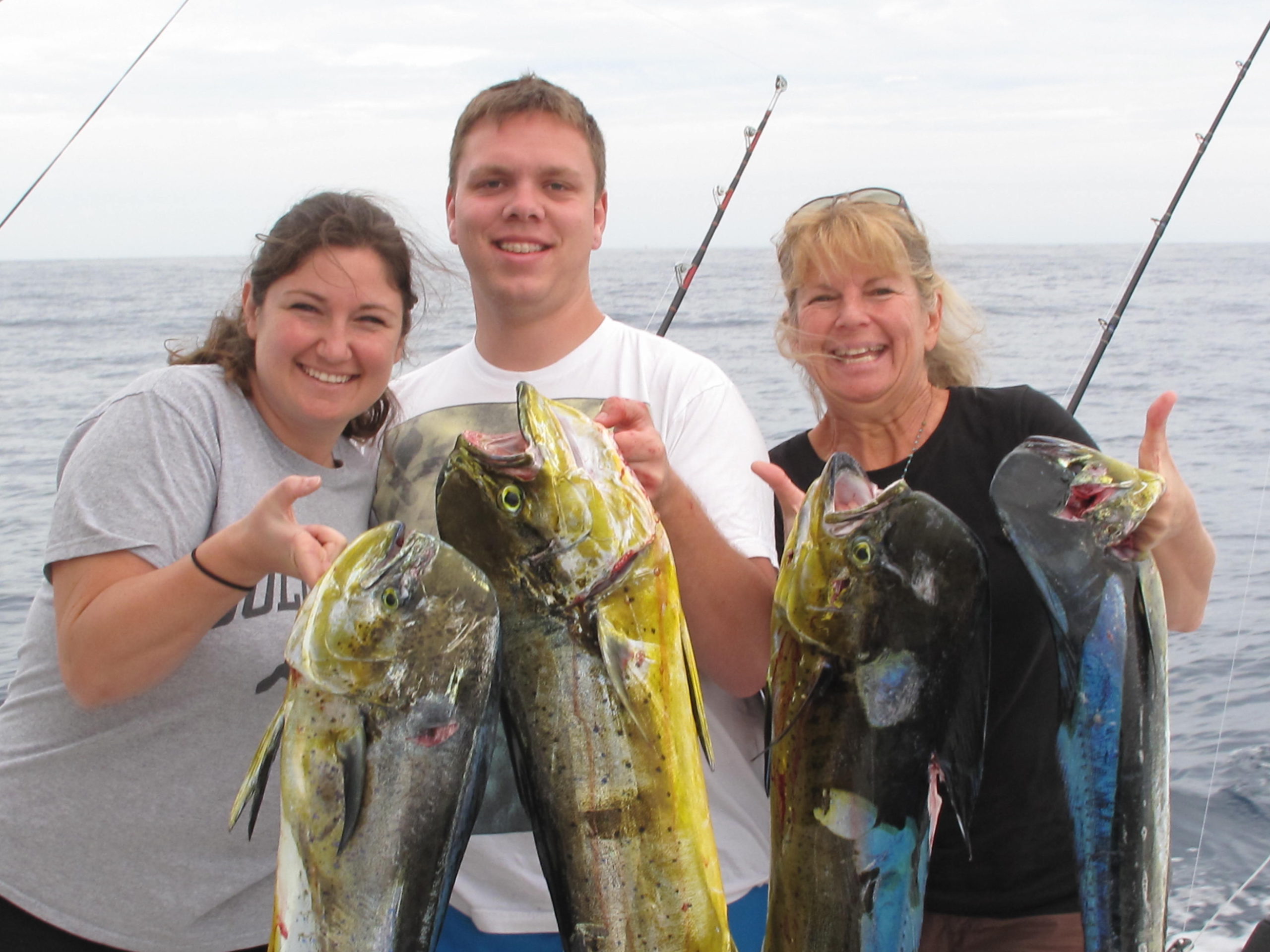 OTHER SPECIES:  After the rains is a good time to fish dorado, as they congregate underneath floating debris making them easier to find, but then again, the catches were getting consistent even before the rains. This week they were the most widely caught fish in Cabo, giving us a total catch of 222 fish equivalent to ninety three percent catch success rate. Catches ranged from one to fifteen fish up to 20 lbs. There was a tie for top dorado boat this week between Adriana and Valerie, who both caught fifteen each in one day – of course limits were respected.  Tuna catches slowed way own with just fourteen percent of our boats catching school size fish. There was one massive tuna caught out of San Jose the day before the port was closed that weighed in at 335 lbs, aboard Gordo Banks pangas – this fish easily makes the top ten of the largest tuna every caught here. The only other fish we caught were a few wahoo up to 45 lbs. and skipjacks.
LOCATION: Pacific – Los Arcos, Gaspareno, Migrino, Pozo de Cota, Golden Gate.
WEATHER CONDITIONS: Heavy rain on the 25th followed by rough seas on the 26th & 27th, when the port was closed.  Now hot and humid with partly cloudy skies.
AVERAGE WATER TEMP: 85 F
BEST LURES: Caballito, ballyhoo, green, purple, petrolero, blue and white