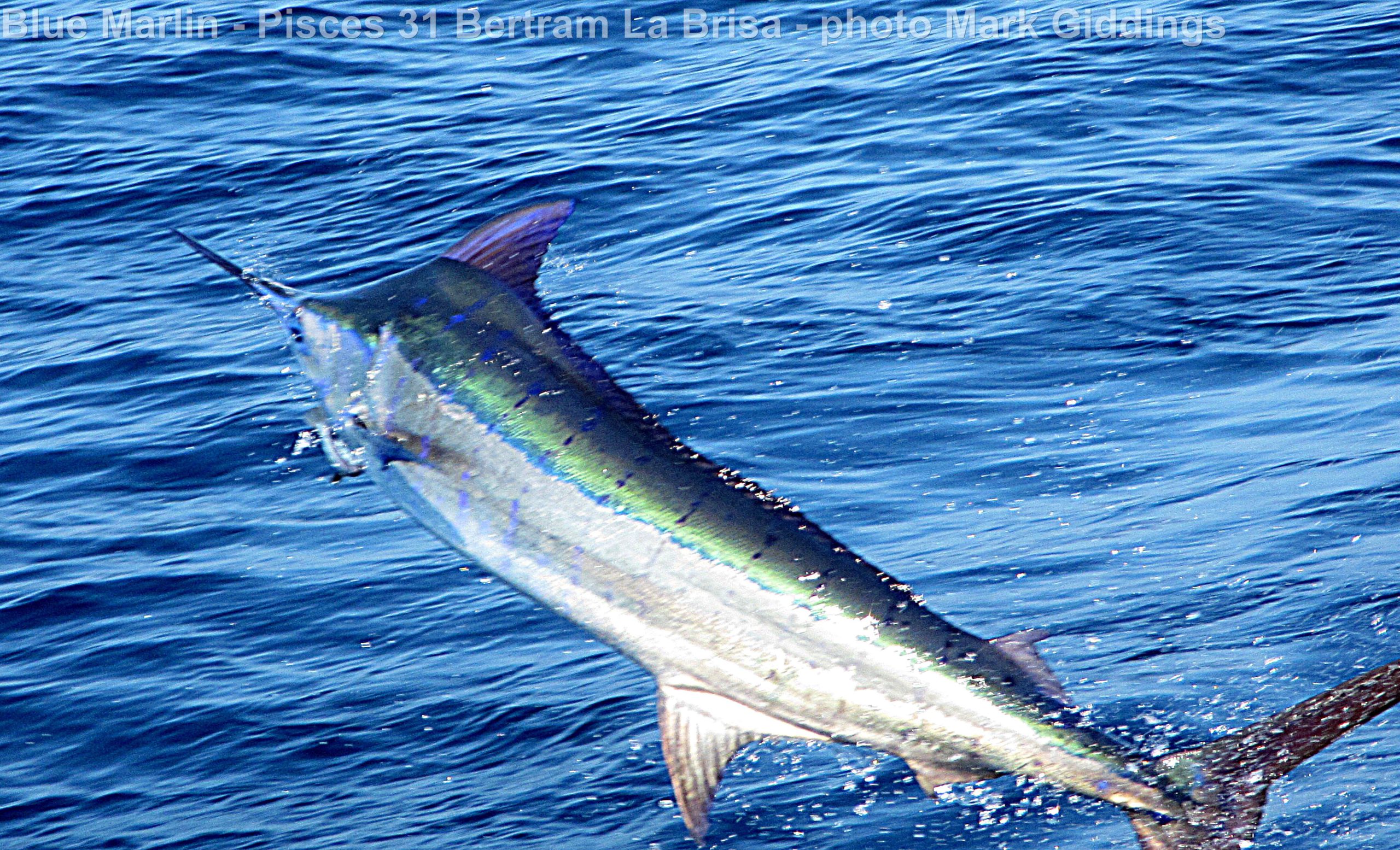 BILLFISH: Fishing was not easy this week, with some boats running up to 40 miles, though usually for tuna and still blanking out, whilst others stayed in around the 20 miles mark and did better. There was no set recipe for success an even though seventy five percent of our boats caught fish, this is not as good as we expect. It’s hard to say why, but we feel the weather is not as hot as it should be..if you are visiting you would say we are crazy, “it’s baking out there”, but we should have more tropical storms out in the Pacific; it seems they are taking a different track towards Hawaii at this time, plus we had a waxing moon all week with full moon happening the last date of this report. The sea surface temperate satellite maps tell the story too; the water is blended near Cabo with no clear temperature breaks. Nevertheless, billfish were the number one catch for Pisces anglers this week and though some boats got “skunked” others had remarkable catches. Pisces 28ft Uniflite Andrea had one of the top catches of the week on August 3rd for Jace Richards & Julia Worden from Aubrey, Texas on board.  They fished 25 miles from the 180 spot and released two blue marlin up to 210 lbs. & two striped marlin around the 100 lb. mark – the blues took lures and the stripes took live bait. This same day 31 ft. Cabo Cabolero had a slightly larger blue at 250 lbs. that took a  Petrolero lure at the 95 spot for Peter Martine from New York, who also landed a 30 lb. dorado. We are seeing quite a lot of juvenile blue marlin; with Speedwell having a 146 lb’er die on them & a 170 lb. striped marlin that was successfully released for Jay Wiviott from Long Beach, California.  The next day out this same boat did manage to release another small blue and a striped marlin at the 11.50 spot for Aubrey Pilgrim from Long View, Texas. Some unlucky anglers from Boise Idaho had a big blue on for over three hours that they struggled with, before it got off – captain J.R of the Rebecca told us the fish took a “tigrillo” lure and was just shy of 400 lbs. Speedwell must have had their blue marlin radar on this week as on August 5th, they released another smallish one, just under 200 lbs., a striped marlin & a sailfish for the Jacobson & James’s from Laguna Beach, California. Brad, Charles & Bradley Shields from Georgia, chose to go out on our 38 ft. Blackfin C Rod and were not disappointed to release a 300 lb. blue marlin, an 80 lb. sailfish and boat six tuna.  The Pereda family from Coral Gables, Florida’s request was to target blue marlin. They chose to go with captain Abel of the C Rod and were thrilled to exceed their dream, releasing a blue marlin around 220 lbs., a striped marlin and a sailfish, at the Cabrillo sea mount – the blue marlin took a tigrillo lure, the striped marlin a dead ballyhoo and the sailfish a live caballito. The 31 ft. Bertram Ruthless, captain by Julio Castro did well to release two striped marlin and boat a wahoo and tuna for Grant Cowie and friends from Laguna Beach. Pisces anglers caught a total of 38 billfish this week consisting of 22 striped marlin, 11 blue marlin, and 9 sailfish – with three fish kept, the rest released. 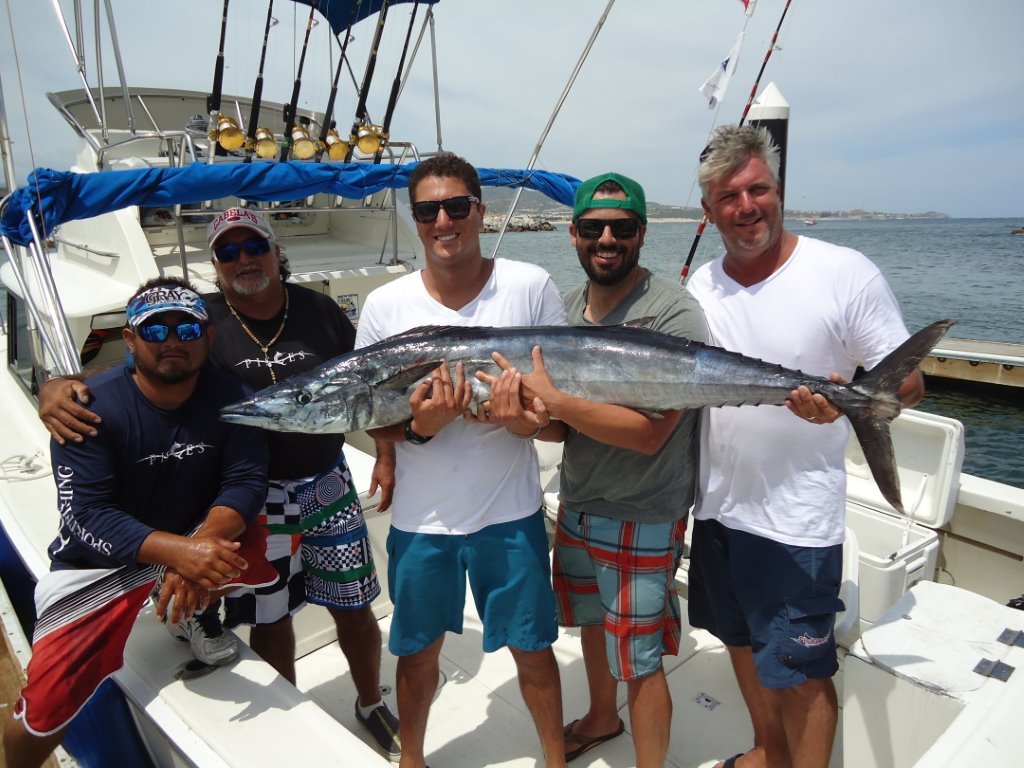 OTHER SPECIES: Tuna catches dropped off this week, due to perhaps the presence of commercial boats in the area; still, thirty five percent of our charters did find tuna, though in lesser numbers than previous weeks. Most tuna caught by one boat was for Lawrence Young & friends from Houston, Texas who caught sixteen up to 20 lbs. at the 95 and 11.50 spots – Lawrence also released the only shark of the week, a 70 lb. pilot, aboard the 50 ft. Flora T. The largest tuna however, were caught aboard 28 ft. Andrea by Justin & Stacey Counterman from Pennsylvania. They caught a total of six 28 miles out from the 150 spot, with three small up to 20 lbs. and the others weighing 80, 90 & 120 lbs. respectively. Catches per bait ranged from one to nine fish giving us a total catch of 107 fish. Dorado catches were quite a bit slower with just twelve percent of our charters hooking up to fish around the 20 lb. mark. Yahoo the 42 ft. Bertram did the best for Dorado with the largest fish of the week, a 40 lb’er, for Mike Goedecke from Lake Charles, Louisiana and also for numbers for catching five in one day on August 4th. The only other fish to be caught were few wahoo and skipjacks. Biggest wahoo of the week was 48 lbs. caught aboard Ruthless for Grant Cowie from Laguna Beach, CA after it took a Petrolero lure.
WEATHER CONDITIONS: Hot, sunny, partly cloudy, rough seas on a couple of days, now dead calm.
LOCATION:  all over the place – 20 to 40 miles out from Land’s End, Herradura, 95 spot, 11.50 spot, Cabrillo Sea Mount, Elias Calles, Moros Prietos, Barco Varado, and Punta Gorda.
AVERAGE WATER TEMP: 86- 87 F
BEST LURES: Blue marlin lures – trigrillo, petrolero, striped marlins live & dead bait, sailfish live bait, tuna cedar plugs, dorado live bait and yellow & green lures.