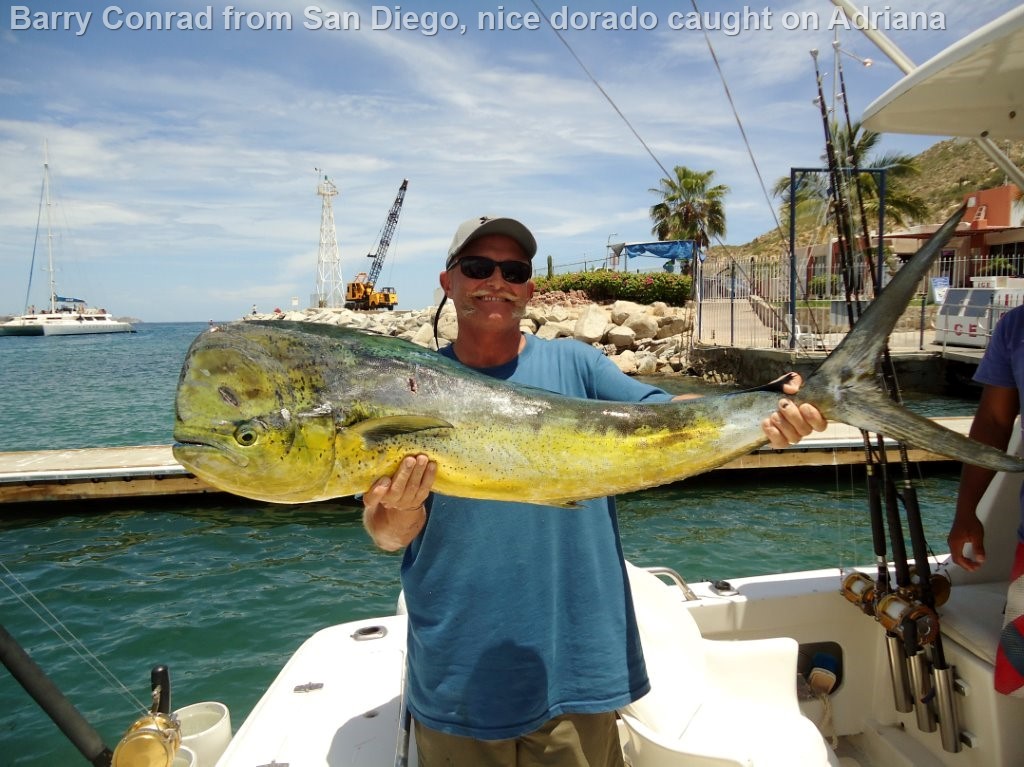 BILLFISH: People are so used to incredible fishing in Cabo, that it is hard when we get a few up and down days. With full moon on August 9th and a big moon all week, boats were hard pressed to have consistent fishing – they would do great one day, then were “skunked” the next, for no apparent reason – though we did notice a couple of degrees drop in water temperature. Our seventy percent success rate would be considered decent anywhere else but we are used to spoiling our anglers with much better rates. However, as usual those that hit it did very well. Michael Dexter from Norman, Oklahoma headed offshore thirty six miles aboard Pisces 31 ft. Ruthless, where he was able to release two blue marlin, just under the 200 lb. mark on August 10th. Ruthless followed up with another blue marlin this time at San Jaime for Briana & Ben Moyse from Chicago on August 12th, then did well again on the 13th with their third blue marlin of the week, estimated at 235 lbs.,  as well as a striped marlin for Texan angler Matthew Adamson. Top one day billfish boat, was 31 ft. Rebecca, with Linda & Terry Smith, Mike & Pam Kelleher & Mike Sparkman from Norman, Oklahoma (again) on board on August 12th, when they released EIGHT sailfish and a striped marlin outside the 210 spot – all took live bait. Rick Walsh from Cleveland, an old friend and client, was out on Rebecca on August 9th and managed to release two sailfish, nice catch, but not amazing, so why did he make the fish report? Well he told us that he had a nice tuna on for thirty minutes, with the fish over 100 lbs., when “Flipper” passed by and cut the line with his mouth, true story..now we don’t know if the dolphin (porpoise) was named Flipper but it did cut the line. Not hard to believe as it is a known fact that dolphin and tuna go together. You want to find tuna, then look for a school of dolphin (porpoise) and the tuna will be underneath. One of the better days was August 11th, though when we saw Cabolero catch a 215 lb. blue marlin, thee tuna and three dorado for Pete & Rita Chow form Denver, Colorado. The Rebecca was lucky again and released a 220 lb. blue marlin for Timothy Lynch from Florida and our new 31 ft. Bertram Tiburon also released a blue at San Jaime, around the 200 lb. mark  for Nick Lopez from Brea, Georgia. Sailfish again outnumbered the Cabo staple striped marlin, though some of them were quite small at 60 lbs. Our total billfish catch was 36 fish, consisting of 13 striped marlin, 7 blue marlin and 16 sailfish. 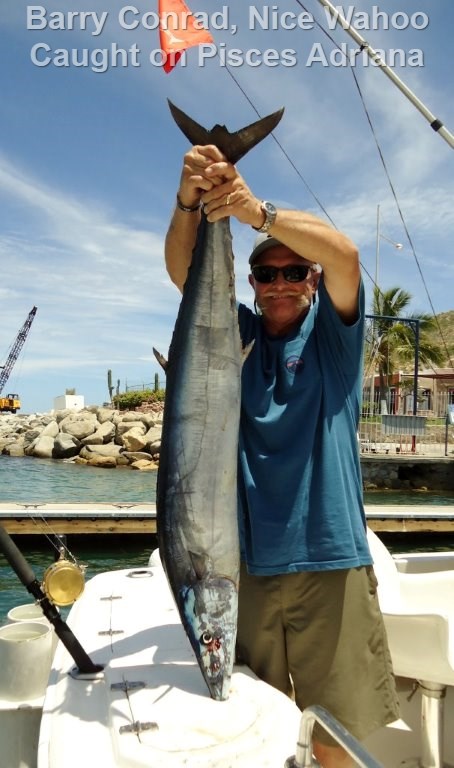 OTHER SPECIES: Dorado catches are on the climb and surpassed those of tuna this week. Twenty seven percent of our boats caught dorado up to 30 lbs. Tiburon caught the most dorado at the Golden Gate for Joe Hibbard & Glenn Slomin from Miami Beach – they caught fourteen and released eleven as well as four skipjacks.  Catches were of between one to six fish over a wide area, but generally speaking the Pacific was better.  Tuna catches were a little lower at twenty two percent and catches of one to nine per boat. Weights varied from 15 lbs. all the way up to a 113 lb. fish caught by David Pincus from Houston aboard 28 ft. Andrea. Believe it or not the most abundant fish this week was skipjack with a mixture of both the good eating white type as well as the black.  They were caught up on the Pacific side, fairly close to shore near Migrino.  Something to do when nothing else was biting and a lot of fun on light tackle. Our total skipjack count was 164 fish.  Wahoo is the best eating fish around and we had a couple of boats to catch these at around 40 lbs. Linda Smith from Oklahoma caught three roosterfish aboard the panga Gloria off of Chileno.
WEATHER CONDITIONS: Hot with some clouds, we had a couple of brief rain spells, like ten minutes each, but no real rain. It did rain quite heavily at San Jose airport as well as La Paz, Swells on a couple of days, but mostly calm.
LOCATION: Golden Gate, Sea Mount, Migrino, Herradura, Los Arcos, San Jaime, 210 up to 35 miles out.
AVERAGE WATER TEMP: Slightly cooler water, down to 84 F
BEST LURES: live bait, cedar plugs, feathers, green/yellow,  blue/white