BILLFISH: The Striped Marlin report increased by seven percent compared to last weekly report! Although the stronger, cooler winter winds coming from the North made fishing a little slower overall, it was still wonderful enough to come down to Cabo and spend a pleasant vacation reeling the fish of your dreams!

The “Andrea” vessel got tight lines for Billy and Michelle Kreft, Andy and Andrea Johnson visiting from Iowa releasing a Striped Marlin, one Dorado and five tunas outside of La Ballena over the Pacific side. Pisces’ vessel “Tracy Ann” had a great trip reeling a Striped Marlin at the Old light House for the group of Dustin Jackson from Jamestown, North Dakota. Very Lucky guys! “C Rod” released another Striped Marlin for Scott Fagen and Frank Bennett from Texas State in the same spot over the Pacific. The Cabo “Hot Rod” a 42ft beauty released in the Pedregalito a Striped Marlin for Sean Lucas and Ryan Dyrbye from British Columbia, Canada. On February 5th, Pisces’ 28ft “Andrea” traveled 30 miles out of the hill and released a Striped Marlin and a tuna for Michael & Suzanne Laster and Heath and Michelle Martin from Oklahoma City. Captain Ray Winkler’s run on Pisces 31ft “La Brisa” to the Golden Gate got a Striped Marlin for David Metz and Dale Helsing from Elko, Nevada. The only Marlin spotted over the Sea of Cortes was aboard the “Adriana” and its estimated weight was 120 lbs for David & Dale again!.  Seventeen percent of our Pisces anglers released 10 Striped Marlin. 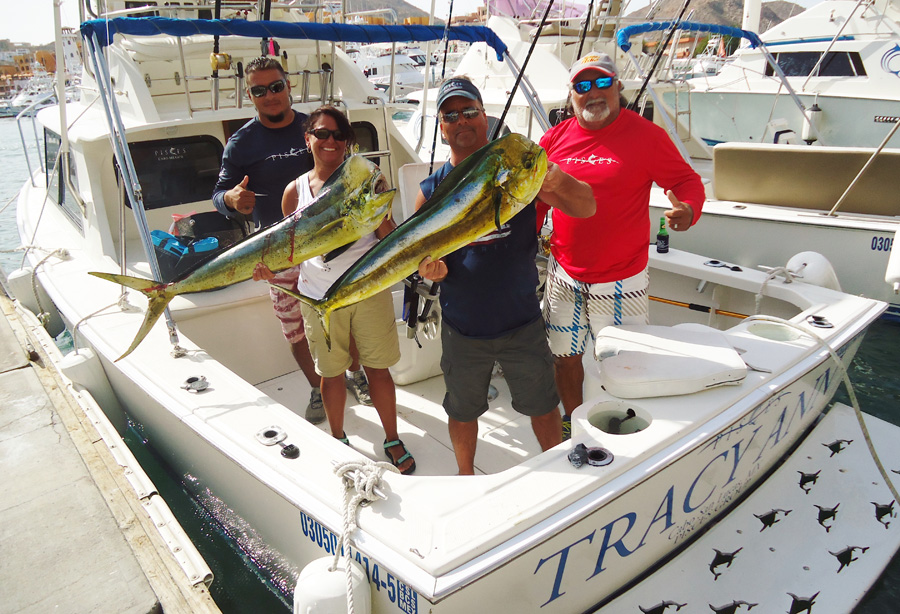 OTHER SPECIES: We have an increased for Dorado catches as well, the always ready”Listo”Pisces’, 35ft boat, run’s to El Molino passing the Old light house got a 25 lbs dorado with live bait for Joe Franz, Greg and Brenda McNew and Brian Mohr from Houston, Texas.  Our 31ft”Ruthless”caught two dorados between 15 to 18 lbs. outside of the Golden for Scott Weaver, Jim Parkin and Wes Smith from Southern Pines, North Carolina.”Tracy Ann”, our 31ft boat got tight lines with two dorados and fourteen tunas, between 10 to 20 lbs for Marc Groen and Michael Lindermulder from Orland Park, Illinois. And our “42ft “Yahoo” with Captain Ricardo went all the way outside of La Ballena, Pacific side and spotted fourteen tunas with cedar plugs and feathers, estimated to weigh ten to twenty pounds for Matt McCarthy’s group visiting from Texas. Our 32ft “Bill Collector” just never stops!  She reeled twenty four tunas, seven released, weighing an estimated 15 to 40 lbs for Bryan Johnson, Hugh Gannon, Matt Curry and Kevin Gleason and guests visiting from Atlanta, GA. As we moved during the week the tuna pushed our further reaching almost the 40 miles, our 31ft boat “La Brisa” got 10 yellow fin tuna thirty seven miles outside of the Faro for Larry and Jacy Barnwell from Houston, Texas. Our good friend Chic from Scotland brought sixteen tunas aboard the”Valerie” (a 35ft Pisces vessel), in a long ride to San Jaime Banks. Forty seven percent of our Pisces customers brought 216 tunas, Fifteen percent brought 11 dorados and the one percent reeled small trigger fish only, a bit quiet for smaller species.

WEATHER: Clear Skies, Strong winds over the Pacific side

Based on the catches of Pisces by Ady Moya.