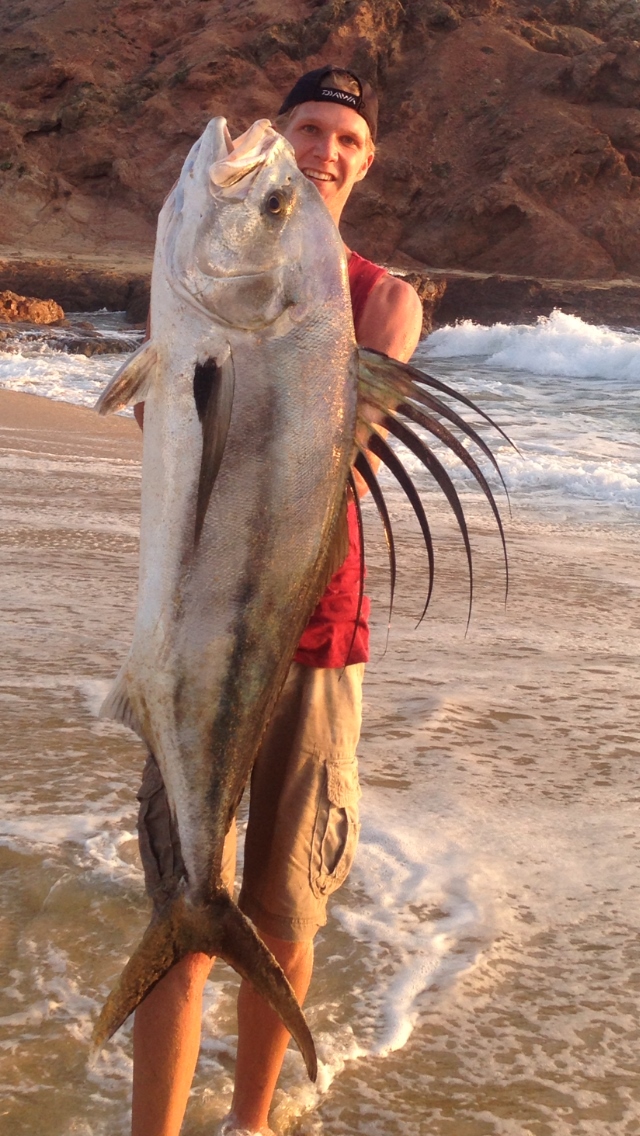 Wesley has lived in Baja all of his life, much of which has been spent exploring Baja’s beaches. “I caught my very first big roosterfish when I was 14 off the lighthouse beach at Cabo Falso. My friend, Steve Murphy, came to my house and said ‘Let’s go down to your beach. I hear the big roosters are biting.’ The two of us go down; I have a small rod with light line that I usually use to fish off the rocks and catch small perch, pompano and what not.”

“Suddenly a school of mullet appears out aways with some huge roosters tearing them up. Steve hands me a ranger that I tie on my light outfit. First cast, one of the roosters inhales the fluttering ranger and the fight is on! Instead of heading out to sea I was lucky and the fish swims down the beach with me in hot pursuit. It took more than an hour to bring that fish to shore. After a few photos we let it go. When I showed the picture to Minerva she pointed to the rod with the 12-pound line and said that she didn’t think a rooster had ever been caught on 12 pound and she was right. That fish would have been a line-class record! I have tried since then to catch a big one on that tackle and it usually lasts about 10 seconds before I’m spooled.” 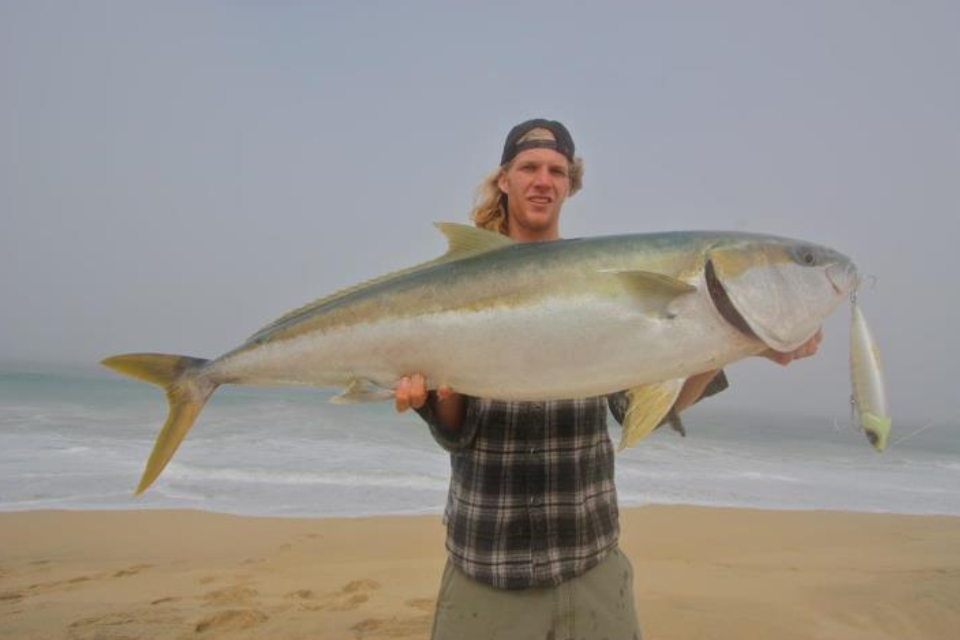 Since then honing his skills as he goes, Wesley has truly become a “Son of the Beach.” Guiding for the past six years, he has explored the west side of the Baja Peninsula all the way up to Punta Gasparino as well as the beaches up in the Sea of Cortez.

This easy-going, 6′ 7″‘ son of the beach’ has adopted his own style of fishing to his guiding, which one could also classify as “easy going.”

” I believe in letting my clients have as much freedom as they want or need. If it’s a group I spread them out 100 yards on the beach. I find that many of them learn how to cast better on their own, enjoying the lack of pressure of someone watching their every move. If they want some good casting tips, I can sure help them; but if they want space, that’s okay, too. The other day I had a woman who hadn’t cast the long rods we use on the beach very much. She was unable to get past the waves to begin with but after a few tips at the beginning, she worked on her cast, and by the of the day she was out casting her husband.”

Last year, Brough’s trips drew the attention of Tracy Ehrenberg, Pisces Sportfishing, who knew his family well. She invited him to offer trips to her clients at Pisces and has a page dedicated to his surf fishing on their site. http://www.piscessportfishing.com/surf-fish-in-cabo.html

Judging by the photos and the number of comments by excited clients about their trips and their memorable catches of yellowtail, roosterfish, jacks, pargo, grouper, sierra even sharks, sometimes longer than the anglers are tall, found on his Facebook page Cabosurfcaster, this ‘Son of the Beach’ is on his way to become the member of a very select group of Watermen of Baja