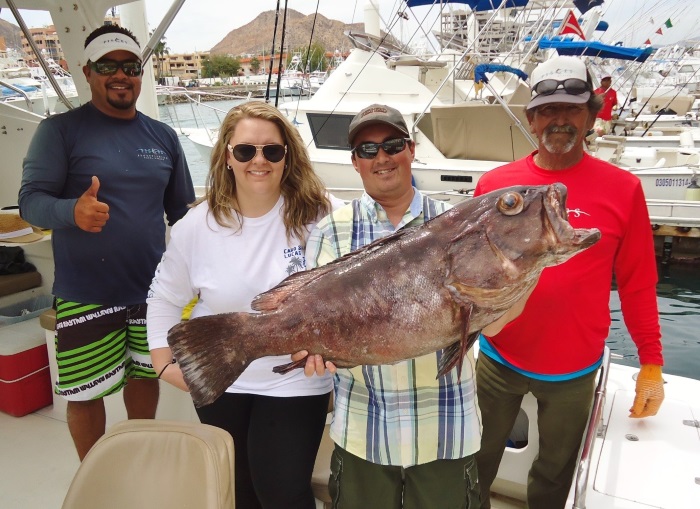 BILLFISH: This week was another slow one for marlin with a gorgeous full moon not helping either. Pisces Rebecca was one of the few boats that had a good day on April 19th off of Punta Gorda on April 19th. Jon Svendsen and Jean Hubler, repeat Pisces anglers, did very well to release two striped marlin, one a baby 60 lb’er and its bigger brother at 130 LBS with ballyhoo and a blue and white lure doing the trick. The day before this, Rebecca was again one of the few boats to find marlin, on this occasion at Medano Blanco, a nice fish over 180 LBS that took a live caballito. Not only did they catch this large striper they also caught a wahoo for the Feasler family from Michigan. Nobody could say that the crew on Tracy Ann doesn’t try; they headed out forty two miles with the Desmarais family from Connecticut on board and were rewarded with the release of a striped marlin. They were also kind enough to fish out a 30 LB turtle that was wrapped in a plastic bag and return it alive and well to the water. Pisces Valerie had an active day for Dennis and Tracy Bohrer from Wisconsin; first off they caught a 130 LB striped marlin at Los Arcos, and then had fun at Migrino catching nine triggerfish, three ladyfish and three mulejinos. Several other boats did see marlin and even hooked them, but getting them to the boat was another question. Pisces anglers caught a total of fifteen striped marlin this week.

OTHER SPECIES: Just a few yellowfin tuna were caught this week and were not anything to write home about at 5 to 10 LBS.  A couple of sharks were caught this week, one was a 60 LB pilot shark aboard Valerie and a 150 LB hammerhead shark was released from the panga Poseidon by French angler Luc Trasleglise. We remind anglers that a ban on catching sharks will go into effect on May 1st; all sharks have to be released between May and July.  More than half of the boats caught good quantities of smaller game this week. The most numerous fish to be caught were ladyfish, followed by grouper, triggerfish, babosas, mujelinos, then sheephead, skipjacks, amberjack and red snapper.