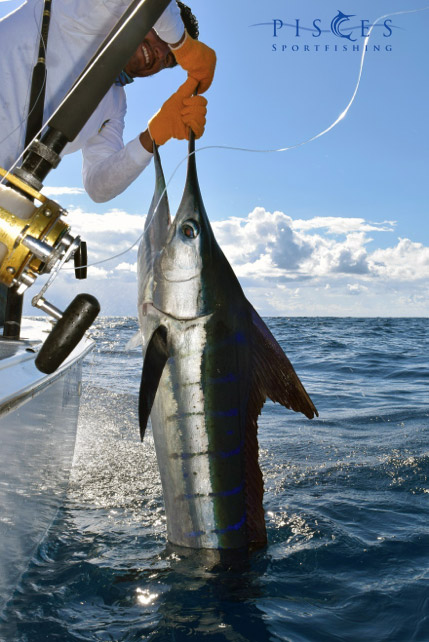 BILLFISH:  This week we saw a marked improvement in the Cabo fishery, as striped marlin finally put in a steady appearance.  The area in front of Cabeza de Ballena the 95 spot and the 11.50 sport, all on the Cortez side is where the marlin could be found and on most days enticed to bite.  The few boats that did not achieve a catch did see and bait fish, but they were not always hungry.  On April 20th C Rod had an outstanding day catching and releasing five striped marlin and boating a wahoo for Greg Kent.  This same day Listo released four marlin ranging in size from a tiny 60 lb. fish up to a 120 lb’er the largest they caught, for John Nelson and friends from Woodbury, Minnesota.  This same group went out a couple of days later, this time aboard Cabolero  and again released four marlin, this time a little larger in the 120 to 140 lb. class, all caught on caballito (green jacks).  Earlier in the week it was the Ruthless that released four marlin from 100 to 120 lbs. on a combination of bait and lures for Kim & Paul Salceda from California.  The fishing stayed concentrated in this area producing catches of one to three billfish for seventy three percent of our charters giving us a total of 82 striped marlin and our best week for this species so far this year. 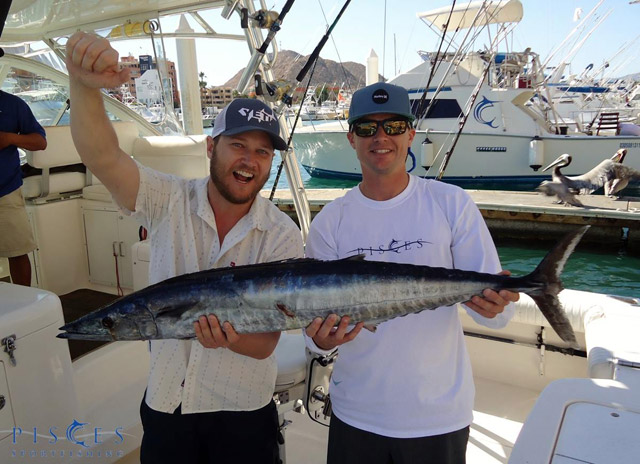 OTHER SPECIES:  The marlin fishing was so good this week that boats did not really try for much else, nevertheless there were a few interesting catches such as Bill Collector  on April 23rd,  with two thresher sharks, estimated at 90 and 110 lbs. released.  We also had a couple of pilot sharks, both around 80 lbs. released.  Inshore some sierra, skipjacks and rooster fish were caught, which accounted for twenty percent of our catches.  Just four dorado were caught this week, one a nice size at 45 lbs. aboard Tracy Ann taken by Rick Falk from North Field, Minnesota.  We also had one smallish wahoo.

WEATHER CONDITIONS: Windy on the Pacific, fair on the Cortez side, mostly sunny.