Skip to content
Overall Catch Success Rate All Species Combined 91%
Numbers at a glance: Billfish 87%, Other 11% 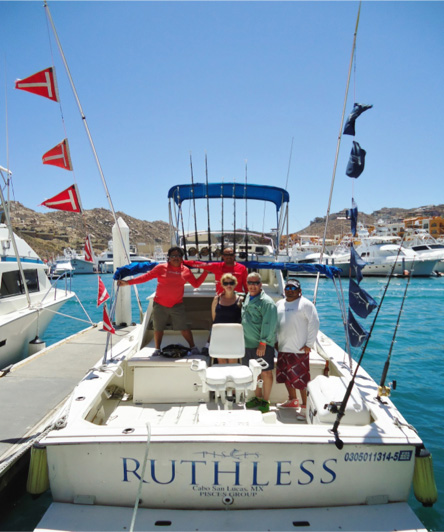 Ruthless was the first boat of the week to release 6 marlin in a day.

BILLFISH:  We had a fabulous week for striped marlin, the best so far this year.  The fish started to appear at the 11.50 spot on the Cortez side and were stacked up for several consecutive days.  Not every boat caught marlin, but even then; they at least spotted them and threw bait but were simply unlucky.  On April 25th Karl & Shari Krueger from Meza, Arizona did exceptionally well when they released six striped marlin from 90 to 140 lbs aboard Ruthless.  A couple of days later Rebecca equaled this with six marlin of their own for anglers Lucas & John Goudreault from Derry, New Hampshire, who’s’ fish were a little bigger at 100 to 150 lbs. .they did well to muscle in around 750 lbs. of marlin, which were all released.  Darry & Laura Wodecki from York, South Carolina also managed to release six marlin at the same location, the 11.50 spot, on April 29th aboard the 35 ft. Cabo Listo.  Closing out the week with a high catch was Flora T II with five marlin released by Todd Mikles and friends from Los Angeles.  Other boats caught between one and four marlin each, giving us a total of 100 fish caught of which all but one was released.

OTHER SPECIES:  Seeing as the marlin bite was so good nobody was really concentrating on anything else.  The pangas we sent out caught a few bonitas, skipjacks, jack crevalle and roosterfish.  Dorado fishing was slow with just a couple caught and no tuna this week.