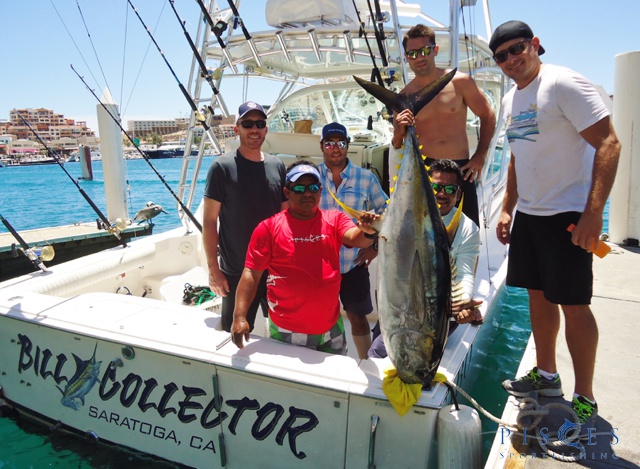 BILLFISH:  What a week we’ve had – lots of nice catches but as is normal for this time of year we still had a little over twenty percent of boats that drew a blank.  When booking in summer, especially August and September it is a good idea to book more than one day.  When it’s good, it’s really good but you can have one great day followed by a blank so by booking a couple of days you cover yourself and can be pretty sure of catching something.  Blue marlin catches continue unabated and they were almost our number one catch this week.  To start out the week Valerie released both a blue and striped marlin outside of Punta Gorda for Anthony Tsim and friends from Redmond, Washington.  This was followed by one of the top catches of the week aboard Rebecca, an estimated 320 lb. black marlin and a smaller blue marlin for Mark Giddings, Bonson Woodall & Benjamin Bockrath from Newport Beach, Ca. both fish were also caught near Punta Gorda.  This same day, August 16th, Ollie Otmer and Lisa Mitcham released a 300 lb. blue marlin aboard Bill Collector at the 95 spot.  Stephen and Adison Haas from Georgetown, Texas had a grand slam aboard Tracy Ann with a blue marlin, striped marlin and a sailfish all on live caballito at Punta Gorda.  A couple of other Texans, Scott and Wes Williams did really well to release an approximate 250 lb. blue marlin but also boated a nice 96 lb. tuna to take home, aboard La Brisa.  Ilona and Thomas from Arizona had a quadruple billfish day aboard 28 ft. Andrea on August 20th, when they released two striped marlin and two sailfish – all on live bait.  This day proved to be the best of the week, as Rebecca also had a four fish day, releasing a lineup of striped marlin from 80 to 140 lbs.  Not only that, but Speedwell  gave us our grand slam of the week,  for Falgun Patel from Georgia, who with his friends released a blue marlin, striped marlin and sailfish.  Pisces anglers caught a total of 57 billfish this week, consisting of 24 striped marlin, 20 blue marlin, 12 sailfish and 1 black marlin.

OTHER SPECIES:  Marlin was the main focus this week so most anglers targeting the big game, however there were some nice tuna catches.  Bill Collector had two nice fish up to 105 lbs. as well as a pilot shark that they released at the Herradura for Byran Keene and friends.  This same day Knot Working a 35 ft. Cabo released a pilot shark, caught two tuna up to 80 lbs. and released a blue marlin for Bryan Keene and friends.  The 31ft Bertram Tiburon had one of the biggest tuna of the week which weighed in at 115 lbs. caught by Bert Sampson from Canada.  Only fifteen percent of boats caught tuna, which when found rarely yielded a catch of more than two fish, but at least they were of a decent size.  We had some nice wahoo, with some getting as large as 70 lbs.  Inshore there were a few needle fish and skipjacks.