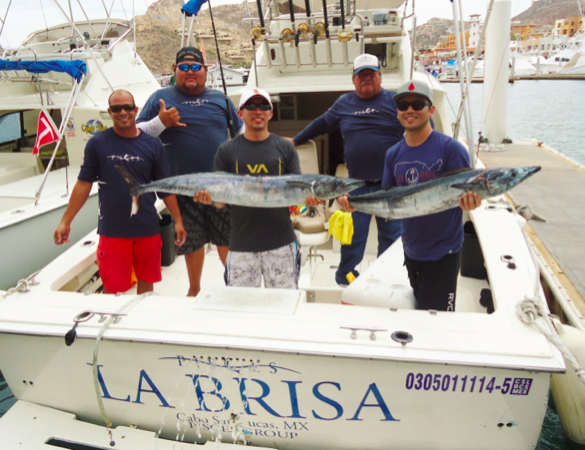 BILLFISH:  The numbers of anglers visiting Cabo took a nose dive as August came to a close and kids headed back to school so only a few boats were heading out each day, which means less boats out, less fish caught.  With that said we still saw a good mix on billfish with striped marlin dominating the pack.  Our hot boat this week was the Pisces 31 ft. Bertram La Brisa, for releasing a 450 lb. blue marlin just half a mile offshore at Las Margaritas for anglers John Nguyen, Mike Babieau & Nick Back.  It was a bit unusual that this large fish took a Caballito; as a bonus to this nice catch they also caught two wahoo for the table.  A couple of days before this La Brisa had another blue marlin on the Pacific side at Pozo de Cota, not as large this time at around 200 lbs. but nevertheless a strong fish that was released in a healthy condition.  Anglers on board Elise Mesayer, Cathy Veaze, Jake Verret & Dusty Hoffpauir from New Iberia, Louisiana had their work cut out for them though as they went on to boat a hefty  130 lb. yellowfin tuna.  Hiroshi Kakamura & Wataru Nagazumi from Tokyo were out on 28 ft. Andrea when they landed a 200 lb. plus blue marlin at the Golden Gate.  Another notable catch was aboard 28 ft.  Adriana for two nice striped marlin, up to 120 lbs. and two wahoo up to 35 lbs.  The only other boat that had more than one billfish was Tracy Ann fishing at the 11.50 spot with David McDonald & friends on board; they managed to release two sailfish up to 90 lbs.  There were some hit and miss days this week but more anglers were catching fish than in previous weeks, this is attributed to a bunch of wahoo appearing and boats going for a more sure thing than perhaps searching offshore for billfish.  Pisces anglers caught a total of 12 striped marlin, 4 blue marlin and 6 sailfish this week; all but two were released. 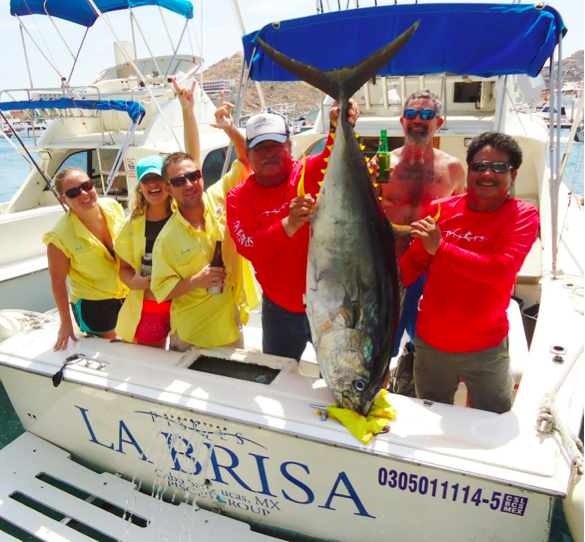 OTHER SPECIES:  The water has really been way too hot for inshore fish but this week we were thrilled to have an influx of wahoo – which meant a lot of tackle got lost, bitten off by their sharp teeth but a lot were caught too.  Flora T had a bumper day with seven wahoo up to 30 lbs.  and a skipjack for Dan Brinker & Dennis McAndrews along with their party of six , fishing at Las Margaritas; the fish were taken feathers and cedar plugs.  Many boats were able to get a wahoo or two, which is considered the best eating fish you can find.  Other than wahoo, there were a few more dorado this week, but nothing to write home about.  The dorado were small, seldom exceeding 20 lbs. and tended to be right around the 10 lb. mark, many just too tiny to keep were released.  Catches of dorado were on the Pacific and were of one to three fish.  Tuna catches were on the slow side with just fifteen percent of our charters catching one to three fish, with the exception being the 35 ft. Bertram Valerie who had eight of them up to 40 lbs.  plus a striped marlin released 20 miles out from the Lighthouse for Jesse Celestino and friends.  Just one 70 lb. pilot shark was released aboard Listo.  The only other catches were skipjacks and then again usually just a single fish.

WEATHER CONDITIONS:  Hot, partly cloudy, a local storm that lasted around 20 minutes brought strong winds and drenching rain to Cabo San Lucas, causing the power to go out for three hours.  Seas have some swell but mostly calm.