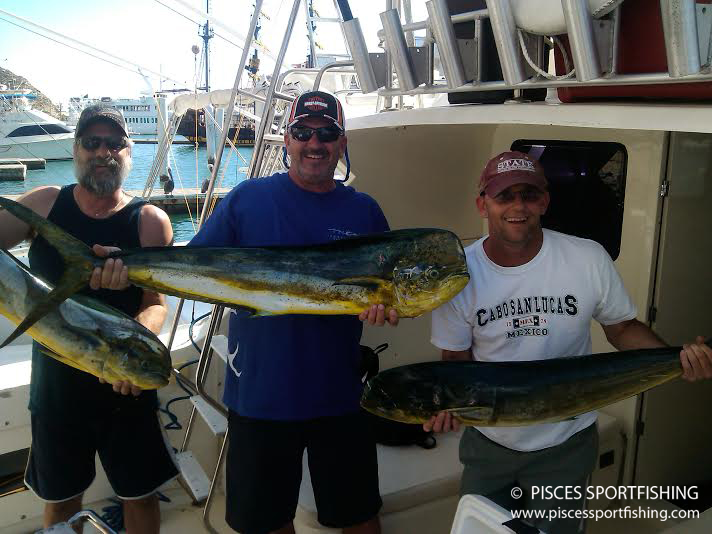 BILLFISH:  We started of the week nicely, with Bill Collector and anglers from Tennessee catching and releasing a nice sized 500 lb blue marlin caught on a petrolero lure out of the Lighthouse.  They went on to catch eight more dorados as well.

The Rebecca also caught a nice blue marlin this week, but this one was found out of Gaspare?o, making anglers Scott and Allison very happy.  The marlin was caught on a green/orange lure and was released.  Dorados bit their colorful lures too and even took some live bait, allowing the anglers a nice dinner that evening.  The dorados weighed from 15 lbs, to 30 lbs.

There were also a few striped marlin this week, with the La Brisa catching two of around 140 to 160 lbs, that were released. They were caught on caballito bait out of Los Arcos, by anglers from Delaware.  They also caught eight dorados on caballito bait and blue and green lures out of Las Margaritas.

The Valerie also did well with the billfish, although more so with the yellowfin, which were tough to find this week. They caught two striped marlin that they released as well as six yellowfin tuna and fourteen dorados!  Tunas were caught all on cedar plugs, while the dorados, five of which were released, landed on green and tigrillo lures outside of Golden Gate.

OTHER SPECIES: We saw an impressive amount of dorado caught this week!  Even with fewer boats out we saw almost double the number of fish caught compared to last week.  The fish have been found in the same locations, even though water temperatures have risen a few degrees, making the water amazingly warm for the season.

The Andrea had a busy day, reeling in nineteen dorados and releasing nine, all ranging from 15 to 35 lbs.  The fish were caught on caballito bait and on a range of colorful lures outside of Migri?o and Gaspare?o.  Anglers were Jonathan and Randy all the way from Alberta, Canada.

The Tiburon caught twenty dorado and released five, as well as three yellowfin that were found around Golden Gate and Pozo Cota area.  Dorado were caught on lures and bait and tuna on cedar plugs and petrolero lures.

The wahoo brought some “yahoos” out of anglers from California, as vessel and crew on our 42 ft Yahoo caught three wahoo of about 20 lbs each.  They were caught on red and yellow lures, as well as bait.  The group also caught thirteen dorados out of Migri?o.

We also caught plenty of roosters this week.  The Diablo Loco panga showed us how it’s done close to shore, catching and releasing three roosterfish, one of which was about 40 lbs.  They also caught two sierra outside of La Bomba.

WEATHER CONDITIONS: Clear skies, but some days with rough seas