BILLFISH:  The Valerie wowed us this week, showing us a nice variety of fish caught last Tuesday.  The anglers caught and released three striped marlin averaging about 110 lbs. out of Migri?o and Las Margaritas.  They also caught three dorados and four wahoos out of La Antena and La Lobera.  Marlin was caught on caballito bait, as were some of the dorado, while the others bit on black/red lures.

The Tiburon had a similarly spectacular day towards the end of the week, with David and Caly from California catching and releasing three striped marlin as well as two dorados and a nice 20 lb wahoo.  Fish were caught out of Los Arcos and Pozo Cota, all on caballito bait. 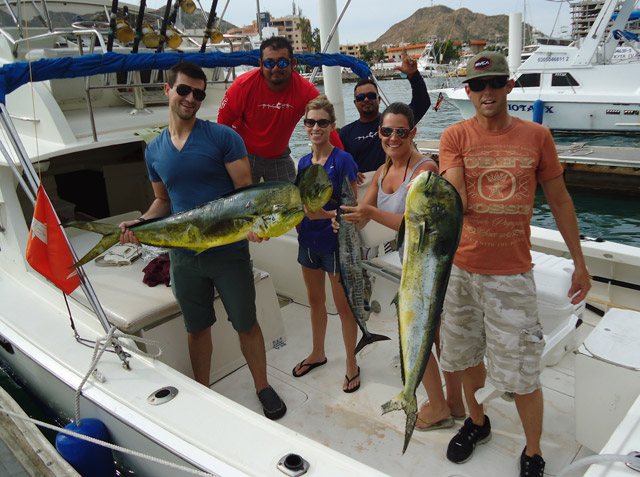 – Nate & Amica and Nathan & Christina from Oregon, went fishing with Ruthless and caught 3 dorados and one wahoo.

OTHER SPECIES: Again, we saw tons of wahoo, which is quite surprising for the season.  Pisces Sportfishing boats caught a total of thirty-six wahoo this week, with the Ruthless being a perfect example of what we’ve been seeing now for the past two weeks; they caught eight wahoo all between 15 and 20 lbs.  However, most wahoo caught by other boats did average about 10 lbs.  The Ruthless caught their wahoo on rappala and blue/white lures.  The Ruthless and anglers Kerry and Matt from Washington also landed three dorado this same day, averaging 15 lbs and releasing one.  These bit on green and tigrillo lures out of Golden Gate and La Ballena.

Dorado took the win for most fish caught this week with 143 fish total.  Most dorado averaged about 15 lbs and Pisces boat Rebecca is a nice example of the dorado caught this week.  Anglers from Idaho caught ten dorados ranging from 10 to 25 lbs., respecting catch limits, as well as one wahoo and one red snapper.  All fish were caught on red/black and blue/white lures out of Golden Gate.

The Flora-T also had an excellent day of fishing catching six dorados all around 20 lbs, caught on green lures, as well as five wahoo around 10 lbs, caught on tigrillo lures.  They also caught and released two striped marlin and one sardine shark, out of Las Margaritas.

As for tuna, we didn’t see too many this week, but we were happy to see the C-Rod and anglers Joe, Cassie, Corey and Trisha all land a yellowfin each, with the biggest weighing in at 112 lbs.  The remaining three tunas averaged 15 lbs. and all were caught on caballito bait outside of San Jaime.

As for other species caught this week, we saw the Diablo Loco panga catch four roosterfish, all released, ranging from 20 to 30 lbs.  Other fish caught this week were skipjacks, triggerfish, sailfish and snapper.