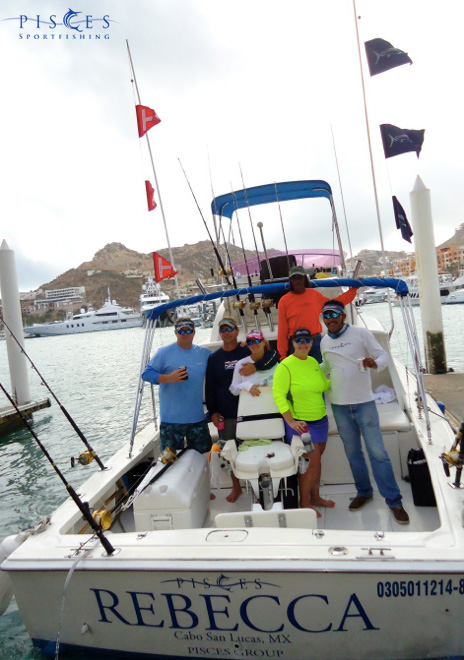 BILLFISH:   This week was a bit frustrating as the start of the week was pretty slow, with the fish moving around a lot and being hard to pinpoint, so what was a productive area one day, drew a blank the next.  Marlins were few and far between so even our top billfish producers struggled to get hook ups.  On one day Tracy Ann decided to go the opposite direction of everybody else and met with success for Dave Mabuy & Dave Farrell, from Spartanburg, South Carolina, when they released two striped marlin in front of Palmilla & Cabeza de Ballena on the Cortez side on February 14th, which was a nice achievement on a day when most boats got “skunked”.  Debora & Ricky Keller from New York headed out on 28 ft. Andrea on February 15th and travelled a long way, thirty two miles out from Land’s End to be exact, but they did end up releasing two striped marlin.  One of our better days was February 16th, when nearly all the boat managed a marlin each plus some dorado.  Top boat was 31 ft. Bertram Rebecca who released three marlin between 100 lbs.  and 140 lbs. at the 11.50 spot for Robert & Tammy Felinski from Texas.  This same day Tiburon our newest 31 ft. Bertram had two marlin released in the same area.  At the end of the week we saw catches again pick up when boats again released an average of one marlin and a lot of dorado.  Captain Rey and La Brisa did better than average at the close of the week with two striped marlin released, a dorado & three skipjack for Eric Baker and party from Delphi, Indiana.  The water is still warmer than normal for this time of year and the striped marlin have still not arrived in huge numbers, however Flora T spotted swordfish that they baited without success and Ruthless had a 350 lb. blue marlin on.  Twenty seven percent of our boats caught billfish, which is up from the previous week, giving us a total of 25 fish. 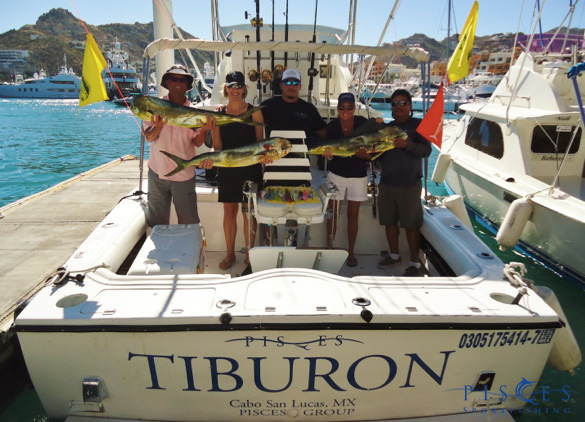 OTHER SPECIES:  Dorado was the most widely caught fish this week but even though catches were excellent, even this abundant fish was missing in action a couple of days.  Best day for dorado was February 19th when boats had fast and furious action, with Ruthless and Valerie getting twenty plus fish in the Elias Calles and Gaspareno areas as well as several skipjacks.  Weights were nice at 15 to 30 lbs. and on this our best day, the dorado were hungry for live caballitos.  Adriana did well for Cindy & John Jacober from Ohio with nine dorado and a striped marlin released in the same area.  The average catch per boat was closer to two fish per boat.  Forty seven percent of our charters caught dorado giving us a total of 186 fish, with many released.  Bill Collector was the only boat to catch a shark this week, not a huge one but they did release the 60 lb. mako at Punta Gorda for Troy and Ada from Michigan.  Inshore there was a lot of skipjack, some sierra and triggerfish, as well as a few amberjack, needlefish and roosters.