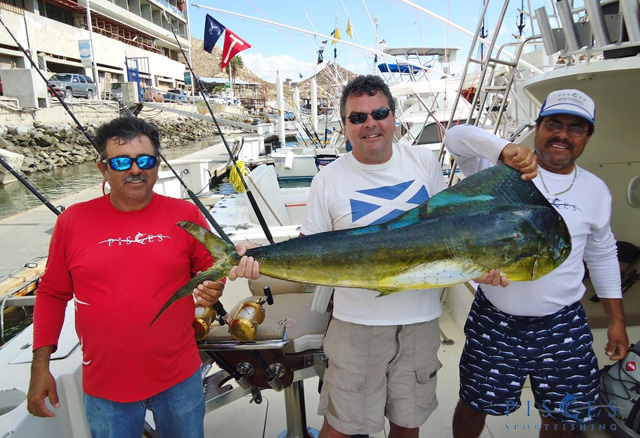 BILLFISH:  We had an up and down week in Cabo, all the right elements are present, lots of bait, good color water, temperature a little high at 73 F, but the fish were hard to locate.  Added to this was the fact that there were fewer anglers in town this week, perhaps half of the previous week, so less boat out fishing means less fish being caught.  It was rare that anybody caught more than one marlin but 28 ft. Adriana managed to catch and release two up to 120 lbs. plus a tiny dorado for the Baker family from Coleville, Washington at Elias Calles on the Pacific side on February 21st.  One of their fish took a live caballito & the other a petrolero lure.  This ended up being the best day of the week for marlin with pretty much every boat catching a single marlin plus a few dorado.  On February 22nd, Adriana was one of the only boats to catch marlin, this time at Migrino for Mallorie Edenfeld who also caught a 20 lb. Dorado. Rebecca fished a little further up the coast this day, close to Golden Gate and also released a 130 lb. marlin and landed a 25 lb. dorado  for Rod Savage & friends from Michigan.  Many times the crews spotted marlin and threw bait to them, which they mouthed and then declined.  Twenty percent of our charters caught marlin this week giving us a total catch of 9 fish; all released.  Our overall catch rate however, did improve slightly. 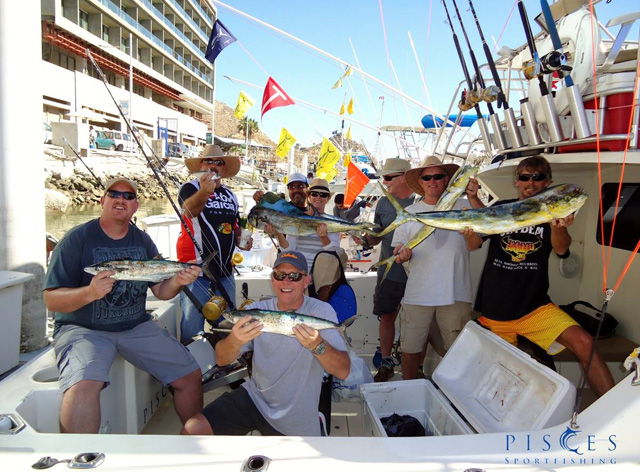 OTHER SPECIES:  Dorado catches provided the bulk of what was landed this week, even though their numbers declined a little.  Catches ranged from one to five fish in the 5 to 30 lb. range.  Dorado were spread out along the Pacific coast from the Old Lighthouse to Golden Gate and took both live bait and different lure colors.  Tuna catches were slow with just a couple of boats finding them.  Tracy Ann travelled 48 miles to find them and even then only got five football size for Derrick & Marilyn from Red Deer, Canada.  Greg Cox was the only angler to catch a shark, a small mako that was released aboard Yahoo.  A small wahoo was caught aboard Andrea as well as a dorado on February 23rd.  Valerie had a good day on small game with eight sierra and three grouper off of Margaritas for George Harrison from Pennsylvania.  Inshore there were a few skipjacks, the odd yellowtail and grouper.

WEATHER: Mostly clear skies with some wind on the Pacific, seas mostly calm.

LOCATION: Pacific from Old Lighthouse to Golden Gate, one day at Cabeza de Ballena on Cortez side.