BILLFISH:  Our overall percentage of billfish catch is down from last week, but only because we had more boats go out, not because we caught less fish.  Although, with more boats out fishing we’d hoped that billfish numbers would rise even more.  However, we did see an increase in marlin catches and the temperature did slowly drop, raising numbers from 9 fish caught last week, to 16 this week; all released.  Again, most boats caught only one striped marlin, but La Brisa and Andrea managed to land two each.  The Andrea caught its two stripers off of La Bomba on caballito bait, and released both specimens, averaging around 120 to 140 lbs.

La Brisa and anglers from Ilinois and Colorado, including 9 month old Garret, caught their two striped marlin off of the Cerros de Arena. They also landed a small 10 lbs dorado. 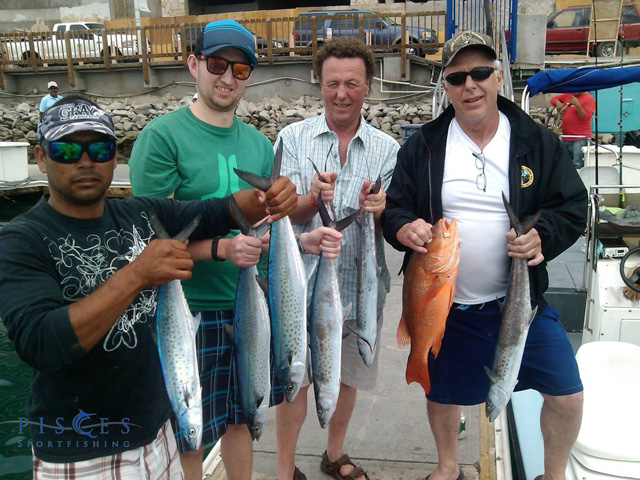 OTHER SPECIES:  Dorado was again the species of the week.  We had 29 boats catch all of 69 dorados.  Little panga Salsa caught 9 dorados (5 released) off of La Bomba on caballito and feather lures.  They also caught 9 sierras closer to the Lighthouse.

Flora T also caught a few dorados, catching them on a tigrillo lure out of the Lighthouse and weighing about 20 lbs each. They also landed a nice 20 lbs wahoo out of Los Arcos, one of only 6 caught this week.

Suprisingly, we had three mako sharks caught this week.  Bill Collector had a pretty decent fishing day on March 6th, catching its 80 lb mako, which anglers from Illiois released, on caballito bait out of the Old Lighthouse.  They also caught a 120 lbs striped marlin, which they released, and a 25 lb dorado on caballito bait.  The other makos caught were also caught off of the lighthouse, and out of Migrino, but on different days.

As for tuna, the only boat to catch any this week was the Tracy Ann who went 35 miles out to the 230 Spot and used cedar plugs to land their 3 yellowfins, only about 10 lbs each.  They also found a nice striped marlin out that way, whch they released and six skipjacks between 8 and 10 lbs.

WEATHER CONDITIONS: Mostly clear, moderate seas and some wind starting to pick up.