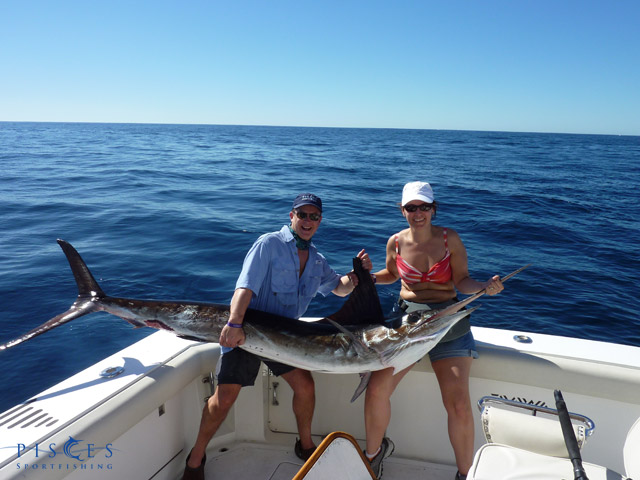 BILLFISH:  Pretty slow numbers for billfish this week, but that is not to say that fishing is slow.  There was a lot of activity but mostly on dorado.  We had a glimmer of hope, that things were getting better at the end of this period, when Pisces La Brisa caught and released three marlin between 100 and 120  lbs at the Cerros de Arena on live caballito and landed a dorado, for French anglers Yves Jovitteau & Jean Claude Gerard.  Pisces Valerie also had an outstanding catch this same day in front of the Old Lighthouse, when Rob Garza & Joshua Milton from Crow Point, Indiana, released a 120 lb striped marlin then went on to catch six dorado up to 25 lbs and a small wahoo.   Tracy Ann always seems to be in the news and this week was no exception; on January 25th a group of Canadian anglers were on board fishing at the Cerro del Golden when they were fortunate to hook and successfully release two striped marlin up to 130 lbs and boat four dorado.  Pisces top of the line 55ft Flora T II, had an excellent day for Javier & Mario Gonzalez from Austin, Texas, who had fun fighting a 130 lb striped marlin that again took a live caballito and then went on to land three wahoo and a couple of dorado.   So what’s going on with the marlin?  It’s hard to say but the season seems to be messed up – warmer than normal, less bait and then when we spot them they don’t seem to be hungry.  The water is a great color there is plenty of marine life; tons of bait in the bay which the sea lions are feasting on – we even saw a school of porpoise less than 500 yards off of the Hotel Hacienda – guess we have to patient.   Pisces anglers caught a total of eleven striped marlin this week. 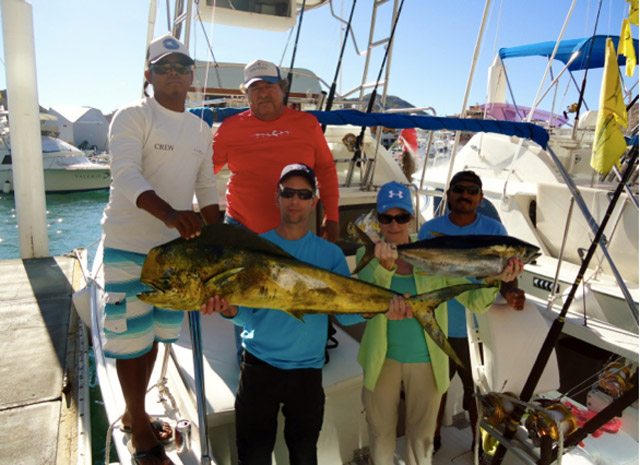 OTHER SPECIES:  Dorado dominated this week, being found over a wide location but mostly on the Pacific between the Old Ligthouse and Golden Gate.  Top catch was aboard Pisces Rebecca for Suzanne & Chris Rafetto from Los Angeles, Ca. they were fortunate to catch fifteen fish up to 25 lbs, releasing a good many of them at the Cerro del Golden on a combination of bait and lures.  Other catches ranged from one to ten fish with sizes from 12 to 30 lbs.   A whopping eighty three percent of our boats caught dorado giving us a total fish count of 242 fish, with kill limits respected.  Wahoo catches remain the best they have been in years; even though the fish are small they still make a delicious meal.  Peter Mann & Dean Sjoyren has one of the better wahoo days, catching seven on rapalas off of Gaspareno as well as two dorado aboard Tracy Ann.  John Vinzant & friends were not far behind with five caught aboard Ruthless also on rapalas with a couple of dorado added to their catch around the 20 lb mark.  Another group from Canada headed up by Terrance Henry from Alberta, caught one of the biggest fish of the week, a 150 lb pilot shark which was released – they also got a dorado for the table.  Inshore some of the boats caught sierra, a few needle fish and skipjacks.

WEATHER CONDITIONS: Unusually cloudy with light rain showers, now clear.  Seas calm with wind coming out of the Cortez on some days.