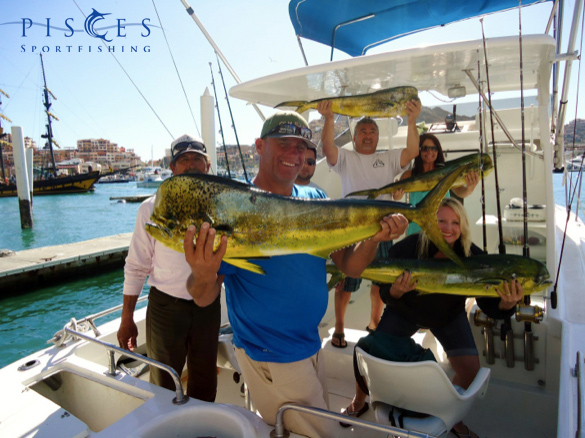 BILLFISH: This week we had picture perfect weather, flat seas, tons of whales, lots of fish; but they weren’t billfish.   The catch rate for marlin remains low even though this week more fish were spotted and our catch rate climbed a few points up to sixteen percent.  Slowly but surely more fish are being caught.  This week we did have a full moon which usually means slower catches due to the fish gorging all night with better visibility and not being so hungry during the day.  Nobody got more than one marlin in a day, but more boats were able to achieve that single fish.  All the fishing was on the Pacific side and some quite close.  Stephen & Karen from Sacramento took a half day trip aboard “Attitude Adjustment“,  not something we normally recommend, but seeing as this is a fast 46 ft. vessel they nipped up the coast and were able to release a 130 lb. striped marlin and boat two dorado off of San Cristobal and were back a little after 11.00 am.  La Brisa had a superb day on February 5th for Bob & Matthew from New York when they released a 135 lb. striped marlin and caught twelve dorado up to 25 lbs.  The striped marlin took live caballito and was from 120 to 150 lbs. in weight.  Pisces Sportfishing anglers caught a total of nine striped marlin this week, all released. 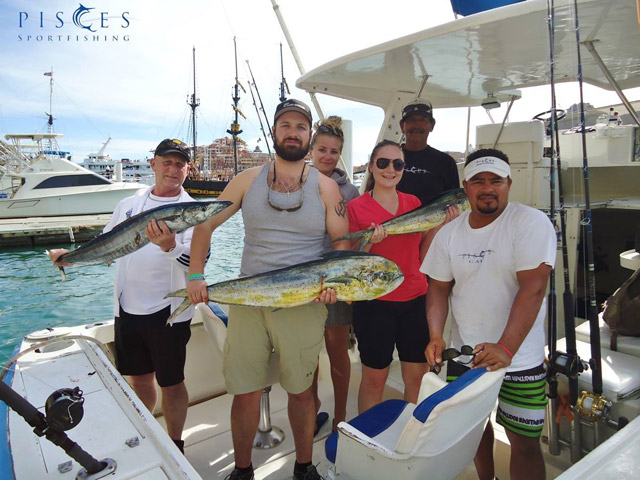 OTHER SPECIES:  Practically every boat out caught dorado this past week, with the catches varying from one to twelve fish per boat in the 15 to 25 lb. class.  Dorado took a variety of live bait such as caballito, sardines and ballyhoo as well as lures; in other words they were hungry.  Tracy Ann was the top dorado boat, scoring a dozen up to 30 lbs. on February 5th for Ian and Wendy from England at Pozo de Cota.  Ninety five percent of our charters caught dorado giving us a total of 233 fish.  A few of the boats went strictly for small game and did well on sierra up to 6 lbs.   A group from Florida out on Andrea caught eighteen plus a couple of dorado.  There were also some small sea bass and amberjacks as well as few skipjacks.  The wahoo run may be over as we only had a few of this species this week which is a dramatic drop.

LOCATION:  Pacific, Old Lighthouse to Golden Gate, with Pozo de Cota, Margaritas and Cerro del Golden being the most productive.

WEATHER:  Perfect in every sense.

BASED ON THE CATCHES OF PISCES SPORTFISHING BY TRACY EHRENBERG