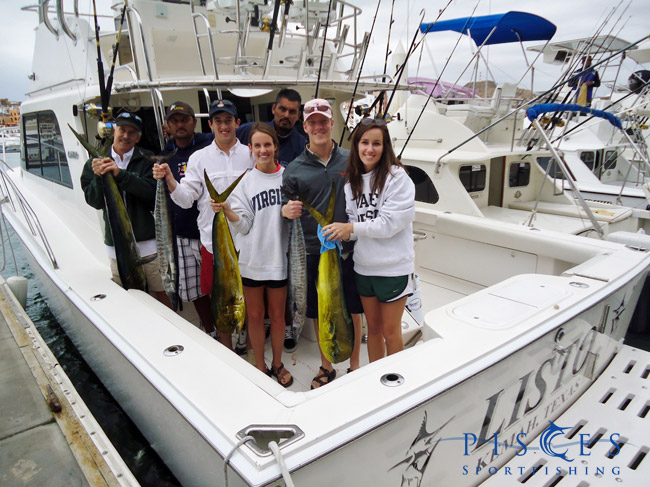 BILLFISH:  As a whole fishing was good this week, but striped marlin catches were not as numerous as we would have wished for.  This seems to follow the general pattern of a good marlin bite in January for two to three consecutive years, followed by a slow one.   Added to this was full moon which many fishermen believe slows the striped marlin bite, as they can feed at nighttime and not be quite as hungry during the day.  We are also at that stage in the marlin fishery, when the fish are on the bottom – strange as that may seem, there are a few weeks every year when we bottom fish for them.  This took place in several locations, such as Cerro Colorado on the Cortez side as well as other as other locations they were found on the surface too, but didn’t seem hungry – free jumping, probably after gorging on what they found on the bottom.  It feels though like we are on the brink of a strong run.  The first few days of this report when the moon was big were the slower ones, but on January 5th, C Rod gave us glimpse of promise, catching & releasing two striped marlin, landing two dorado and five wahoo for Cindy & Michael, Sonya & Dwight, Issac, David, Brayden & Austin from Arkansas – a lot of people on the boat, but a lot of fish caught to satisfy everyone.  More anglers from Arkansas did well on January 7th, when David released a striped marlin, two wahoo and ten sierras aboard Attitude Adjustment.  This same day the ever popular Tracy Ann released two stripers up to 150 lbs. plus a dorado, outside of the Golden Gate for Walter and Nikki and party from Borger, Texas.  Next day a group of Canadians, from Toronto, headed up by Rick, did very well to release three striped marlin in front of the Cerros de Arena.  The very best of the catch though, was aboard Valerie by Mitch, Chris, Alex, Mike & Blythe, from New Albany, Ohio – they managed to release five striped marlin (one each) at Cerros de Arena, on live Caballito.  Pisces anglers caught a total of 40 striped marlin, all but one released.

OTHER SPECIES: Dorado was king this week with seventy eight percent of our charters catching between one and eleven in the 15 to 25 lb. class.  Tracy Ann caught eleven dorado for George & Albert from San Diego, as well as releasing a striped marlin and catching a small tuna.  Tied with eleven dorado caught at Gaspareno was Valerie, for Josh & Steve.  The dorado took a combination of bait and lures and were found spread out though Cerros de Arena was one of the better spots.  Pisces Sportfishing anglers caught a total of 194 dorado this week.  What is rather surprising is the amount of wahoo around; thirty two percent of our charters managed, what is considered the best eating fish around.  Bill Collector did very well to catch four wahoos for John & friends from San Diego at Migrino.  Our total wahoo catch was thirty nine fish.  There was some inshore fish going on too this week with amberjack, triggerfish, sierra , skip jack and jack crevalle caught.  The strangest catch was that of a couple of manta rays that weighed 40 and 50 lbs., both released.  There were so many in the water this past week that it was hard to avoid them, whales too.