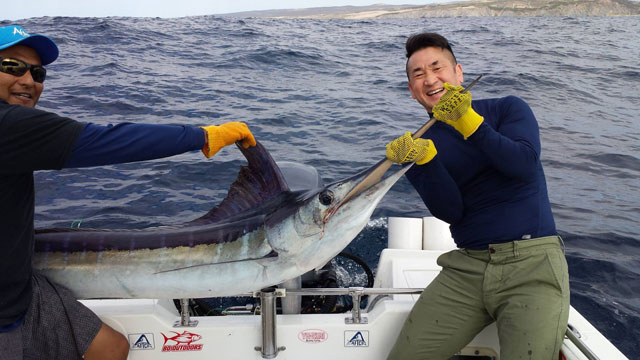 BILLFISH: Fishing in 2016 got off to a good with steady catches of striped marlin and dorado and a nice appearance of tuna too.  Weather seems to be back on track and we have been experiencing cool evenings and brisk early mornings which the fish seem to like.  The marlin bite is not in super strong swing but is totally acceptable with sixty five percent of the boats catching between one and three striped marlin in a day, with the odd sailfish here and there along with some late season blue marlin.  Water temperature is still a little warmer than normal – it should be 70 F but is right around 74 F, which may explain why we haven’t seen the mass migration from further north that usually takes place around this time.  On January 2nd, Pisces Tracy Ann released three striped marlin, all on the small side, just before San Jaime, for good friend Rick Walsh, who also boated a small tuna.  This same day, new addition to the fleet Hot Rod released two striped marlin and caught two dorado and a wahoo; a very satisfactory day for a group of Tennessee anglers.  Next day out 28 ft. Andrea fished a different area between one and seven miles off of Land’s End and managed to catch three striped marlin, bigger at 120 to 140 LBS for Isaac and May visiting from Denver.  Another boat with a triple marlin day was La Brisa with the Levine family from Austin on board.  Their marlin ranged from 100 to 140 LBS and were caught on live caballito at Pozo de Cota on the Pacific side – the two dorado they landed took lures.  This same boat repeated their success with three marlin on January 8th for Matt and Hunter Robinson from Texas as they fished at Los Arcos.  The fish released were from 80 to 140 LBS and all took live bait.  Pisces anglers caught a total of 77 billfish this week, consisting of 74 striped marlin and 3 sailfish.  Marlin was the top sportfish catch this week for Pisces anglers. 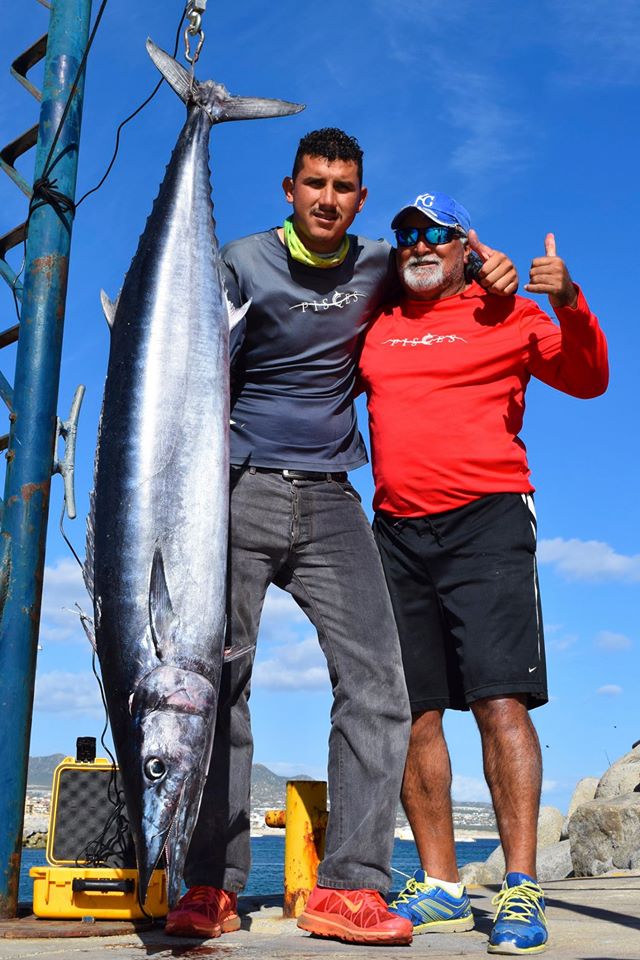 OTHER SPECIES: After marlin, dorado was the most likely catch, the difference here was that multiple catches were more likely with catches of up to nine fish per day as large as 25 LBS.  West Bend, Wisconsin anglers James, Jason, Sam & Steve were pleased to catch nine dorado near La Antena as well as release a striped marlin aboard Pisces Andrea.  La Brisa, fishing a little closer at Migrino managed eighty dorado this same day for Simendinger family, all on live bait.  Our total dorado count this week was 140 fish.  Yellowfin tuna showed up at one of their favorite haunts, San Jaime, but were not a sure thing.  Ruthless released one of the smallest yellowfin tunas we have ever seen at around 2 LBS.  One of the top tuna producers was C Rod who had twenty tunas up to 20 LBS at San Jaime for the Bradley family from Texas, who used both cedar plugs and kite to get hooked up.  It was interesting to see a different species of tuna close to the yellowfin, skipjacks; usually found closer to shore.   Thirteen percent of our charters found yellowfin and when encountered catches of up to twenty fish could be had, resulting in a total tuna catch of 97fish.  The skipjacks weren’t found by so many boats, but when you hit the school you could load up, in fact our anglers caught 88 of these little guys, with many released; they are strong on light tackle.  The BIG STORY this week is the largest wahoo we have seen in 15 years – the monster fish hit a Chiwillie lure off of Margaritas with such ferocity that the crew thought it was a sea lion at first. Dean Reed from Cape Canaveral reeled in this beauty on Tracy Ann, which when weighed on a certified scale was 87 LBS!  Several other smaller wahoo were caught this week but none came close to this one.  Pangas inshore were able to catch stray marlin plus a few sierra and pompano.

WEATHER: Light rain on New Year’s Day, partly cloudy skies that cleared midweek with some chop on the Pacific depending on wind.