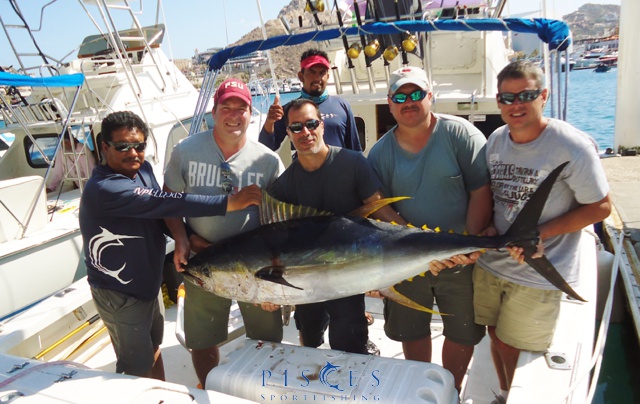 BILLFISH:  Cabo San Lucas experienced great fishing again this week with striped marlin remaining steady and more sailfish starting to appear.  As well as billfish we are starting to see more table fish showing up, with dorado starting to put in an appearance as well as some nice tuna and a bunch of inshore fish.  The honeymoon with the 11.50 seems to be over for the time being as the fish moved on to other locations.  With the concentration broken up boats were able to manage catches of one to four marlin per day, when not heading out in search of tuna.   Pisces Listo released four stripers up to 140 lbs. off of Lands’ End for the Moore family from Colorado Springs – the fish a took a combination of live bait and lures.  This same day, June 17th, Pisces C Rod also released four marlin between Lands’ End and the lighthouse, all on caballito for a group from Brea, California.  The fish were spread out from Land’s End to Palmilla and on some days were closer to Chileno.  A few sailfish were picked up with the marlin and averaged 70 lbs.  Pisces anglers caught a total of 99 billfish this week with all but two released – 96 striped marlin and 3 sailfish. 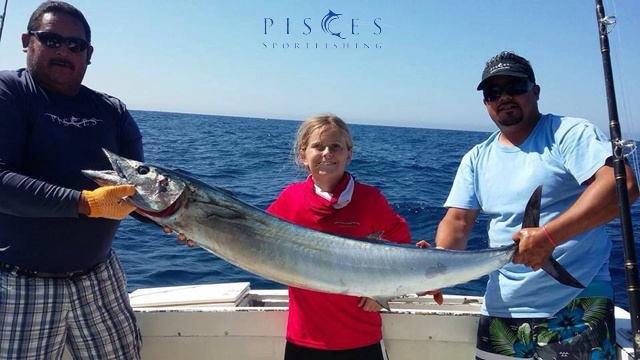 OTHER SPECIES:  This week was a virtual bonanza with wahoo, tuna, dorado, sharks, jack crevalle, triggerfish, bonita, roosterfish, needlefish, grouper, snapper and amberjack caught.  What anglers were most excited about were the tuna, with some huge fish being caught well over 100 lbs., whilst others caught school size fish in the 15 to 25 lb. class.  Some of the better catches of tuna were out of the 180 spot and Destiladeras, which is up past San Jose.  Brett, Brianne, Tyler & Briley Bradford, from Texas had a great day aboard Rebecca landing dorado and a tuna that nudged in over 100 lbs.  Only twelve percent of our boats targeted tuna but they managed to catch a total of 42 fish.  Dorado catches were a little slower, but this won’t be for long, as the summer progresses their numbers should climb.  It was nice to see some wahoo of a good size in the 40 to 50 lb. class.  Doneene Loar from Treasure Island, Florida landed a beautiful 51 lb. specimen aboard Pisces Andrea as well as a dorado.  Sharks remain in the area, mostly pilot sharks in the 70 to 80 lb. class, as well as one black tip – all were released.  Michael Sandman from Ellenberg, Washington caught a very nice roosterfish, estimated at 50 lbs., as well two huge sierras one was reported to be 18 lbs., which if they had verified would have equaled the all tackle world record set in Ecuador in 1990.  Lots of jack crevalle this week with boats catching a marlin or two then fishing or jacks closer in with catches of up to seven fish in a day.  Many boats had fantastic mixed days, such as Flora T with two striped marlin released, a 40 lb. wahoo and three jack crevalle for a group from Dallas.  Another example would be C Rod with two marlin released, a pilot shark released, one tuna and three jack crevalle.

WEATHER CONDITIONS: Windy on the Pacific, sunny but breezy, seas mostly calm on the Cortez side with wind in the afternoons.