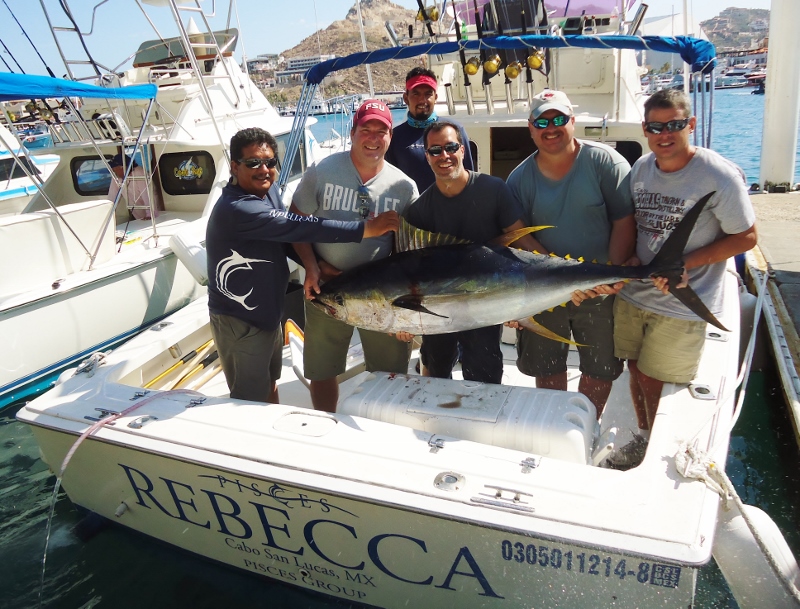 BILLFISH:  Another great week for
fishing in Cabo!  Or we should call it the Tuna week!  We have been waiting for the
tuna to appear down in our waters and did not disappoint to our anglers at all,
but let’s come back to our Billfish which was great.  Carl Smith and Joseph
McCorvey from Hockley, Texas fought a Blue Marlin weight estimated over 180 lb.
aboard Pisces Ruthless with our beloved Leon Camacho who
yesterday put again a Blue in his line participating with the Stars and Stripes
Tournament.  Brad Rau from Minneapolis released another blue, weight estimated
of 250 lb. at Palmilla area.  Pisces Adriana
boat
got a blue marlin 14 miles out of Cabo Real with a “clown lure”, (local name by
the Cabo crews) with a variety of colors.  The Striped Marlin has been spreading
in different areas of the sea of Cortes to the Pacific side, from  Palmilla, to the 11.50 spot, in front of the
Cabo Bay going out about 30 miles out, the Old light House spot and other
fishing grounds over the Pacific side all the way to San Jaime.  The Marlin is
everywhere and this is a glance of the upcoming high season!  On June 22nd
Pisces Flora T with Captain “Toto” put
Brad Jauer’s group in action with two striped marlin released and one yellow
fin tuna at the 95 spot, visiting from San Antonio, Tx.  We had two sailfish
released in the same fishing ground aboard the 28ft Adriana, weight estimated  60 lb. for Ana, Jennifer y Tony Gonzalez
visiting from Alburqueque, New Mexico.  The Billfish was spotted mainly with
live bait, the traditional “caballito”.  Pisces Cabolero did fantastic releasing
three striped marlin weight estimated 130 lb., six dorados and two tunas with
the group of Brian Nugent, Barker, Allison, Brock and Couch from Florida and
Georgia.

16% of our boats caught billfish this week breaking down in 45 striped marlin,
3 blue marlin one of them was lost
during the fight and two sailfish total of 50 billfish.  All the fish were successfully
released but one that unfortunately got wrapped in the line.

OTHER
SPECIES:  The yellow fin tuna was outstanding and
impressive, boats spot from six, twelve, and twenty tunas per vessel!  Tim
Gray, Gary Chawk from Palo Alto, Ca. shared Pisces
Adriana boat with Ashley and Dominic Richard from
Orange County and managed tunas from 20, 30 50 and 80 lb.  Dominic was
celebrating his birthday!, what a way to spend the day reeling huge tunas!  Outside
of the 180 spot Pisces C Rod found
tunas from 10 to 130 and 150 lb. for The Solomon family visiting from
Alpharetta, Georgia;  Tracy Ann reeled a 100 lb. with Dylan and Thomas Eads and Mark
and Markus McGuire from San Clemente, Ca. give them a good fight.  Again with Tracy Ann Bobby Samuel’s group from Midland, Texas fought 130
and 150 lb. tunas, 30 miles out of the 95 spot.  Pisces Bill Collector did good catching tunas ranging in the 160
lb. outside of the 11.50 spot with Michael and Becky Hurley from Virginia.  31ft Rebecca with Jr. and Luis
did their own action with tunas of 130 lb., 21 miles out of the Cerro
with the group of Carter, Beavers and Baxter from North Richland Hills, Tx.  Aboard
Pisces
Valerie Amy and Troy Strawn and Kelly & Mike
Ayers fought 2 tunas of 180 lb. for over 3 hours!  On the 11.50 spot 35 miles
out.  As to Dorado or Mahi Mahi our crews were able to spot some and caught
about 20-25 lbs 28 miles out to the South with 31ft La Brisa with Hazlett and Kline party visiting from Dana Point,
Ca. and C Rod great and tasty catch!

80% of our boats caught tuna, breaking down in 256 tunas and 10 dorados.  Our crews released three pilot sharks in Punta Gorda between 60-90 lb aboard Ruthless with the group of Noynaert & Gidley visiting from
College Station, Tx. And aboard Bill
Collector with Erika Fritz and Barret Blevins, New Braunfles, Tx. Panga Salsa had
a good day with Tom Eads group bringing amberjack, sierra and skipjacks ranging
from 5 to 10 lb. and panga Gloria did great with one rooster, one red snapper
and needlefish from 20 to 18 lb. with Clay Montgomery from Minnesota.

WEATHER: The summer started
officially, a little windy over the Sea of Cortes and Pacific side which gives
a nice cool sensation to everybody local and tourists. Calm seas.

Based on
the catches of Pisces Sportfishing by Tracy Ehrenberg.