Skip to content
Overall Catch Success Rate All Species Combined 80%
Numbers at a glance: Billfish 76%, Other 33% 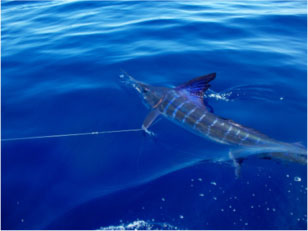 They look so much better alive & are a valuable resource to keep tourism jobs safe for the future.

Please do not consume marlin at restaurants & taco stands. It is illegal & there are other options, let the change began with you!

BILLFISH:  With hurricane Blanca close to Cabo last week, the Port Captain closed the harbor to all navigation for three days as a precaution, so numbers are lower this week, due to the fact that simply less boats went fishing.  The water was a bit different after the storm in that it was quite green, but did not have much debris, as rains were not heavy.  It’s generally true that after a storm it takes a couple of days for fishing to settle down as the crews have to relocate the fish, currents and water temperatures and this was the case this past week, where for the first few days after the port was opened, quite a few boats were “skunked”.  On the other hand we had some nice catches of blue marlin, which are a little early this year due to hotter than normal weather.  The largest blue for us was caught aboard 38 ft. Pisces Speedwell  estimated at 350 lbs. caught the 11.50 spot by James & Sally Sullivan from San Antonio, Texas  on a guacamaya lure;  they also released a striped marlin estimated at 120 lbs.  On June 9th Pisces La Brisa fished the same location and released a 250 lb. blue marlin which took a live caballito as well as a striped marlin for the Burnell family from Lafayette, Louisiana.  This same day Pisces Rebecca had an exceptional day for Frank & Ulrike Hevener from Pennsylvania, with a blue marlin a little under 200 lbs. and three striped marlin; all were caught at the 11.50 on live bait.  The Panga Poseidon fought a 250 lb. blue marlin six miles out from Chileno before eventually losing it.  They weren’t the only losers; Pisces C Rod released a pilot shark for Thomas Hathaway and then spotted a swordfish which they successfully hooked up on live bait at the 95 spot.  The fish was a good size between 250 and 300 lbs. and very tough on 50 lb. test.  They reeled away for hours, until the anglers were exhausted and handed the tackle over to the crew, who also pumped away at the rod until they had it almost to the boat, where it broke off after the six hour fight.  We did hear of another swordfish the same day, making it back to port around 150 lbs. on another boat – the green water always seems to draw them in.   Striped marlin action was good this week with catches of one to three marlin common per boat.  Our hottest boat was Pisces Cabolero with six released on June 10th for David Clarke and friends from Anderson, South Carolina. The fish ranged from 90 to 130 lbs. and took live bait at the 11.50 spot.  June 11th, saw Pisces Tracy Ann & Rebecca, both 31 ft. Bertram’s, have almost identical catches, as they each released four striped marlin and a pilot shark each.  Pisces anglers caught a total of 63 striped marlin, 3 blue marlin and 1 sailfish this week – only two fish were kept. 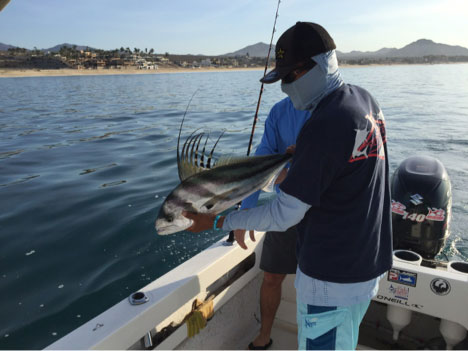 OTHER SPECIES:  Most of the action other than marlin this week for Pisces Sportfishing boats concentrated on smaller game aboard pangas, where we saw good numbers of roosterfish, fair amounts of grouper, jack crevalle and the odd snapper and triggerfish.  Pilot sharks are still around and found amongst the marlin but not in the same numbers as previous weeks and are now a little smaller in the 60-70 lb. class.  We only had a couple of small dorado and tuna but know that some other boats did find some big tunas in the 50 to 150 lb. class.

WEATHER:  Stormy weather with winds up to 70 mph on the Pacific and some rain, followed by bumpy seas for a couple of days, then calm.