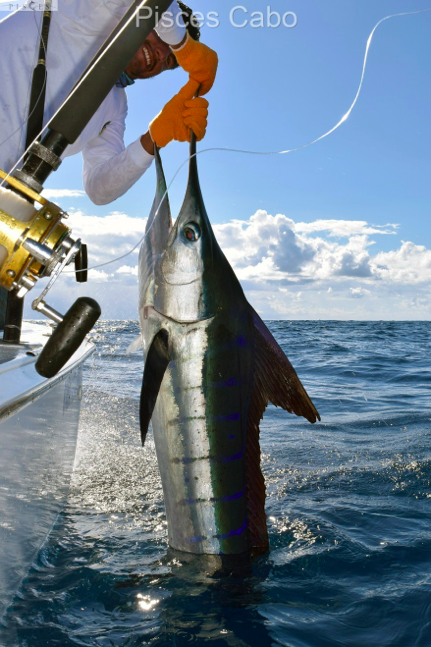 BILLFISH:  It was definitely feast or famine this week but we can see the fishing is gradually getting better.  More boats reported spotting multiple marlin but generally had a hard time getting them interested in bait.  On the other hand we had some boats that did exceptionally well.  Catch of the week has to go to Tracy Ann and for anglers Jason Jones, Steve Hawkins & Fred Gabel from Chico, California.  On March 26th this trio was fishing at Cerros de Arena on the Pacific side when they hooked a black marlin – very unusual for this time of year – the fish was estimated at 210 lbs. and released healthy; they then went on to release two striped marlin in the 60 to 100 lbs. class.  All three fish took live caballito – thanks guys for releasing all three fish.  Not far behind Tracy Ann this week was the ever popular Rebecca who had an outstanding day on March 25th for a group from Oceanside, California, when they released four striped marlin between Margaritas and Los Arcos.  The fish were between 80 and 110 lbs. and were hooked on live bait.  Another boat that did very well earlier in the week was La Brisa with Bart Findley and friends on board from Blue Springs, Mo.  They went up quite a way up the Sea of Cortez coastline, to Destiladeras where they managed to release three striped marlin in the 60 to 130 lb. class. These catches show that the marlin are on the small side, so it looks like there are a lot of juveniles around.  There were several boats that had double marlin days though quite a lot of boats were “skunked” too.  These catches give us hope that the billfish catches will stabilize soon and become more consistent as the watchword lately has been “inconsistent”.  Pisces anglers caught a total of 35 billfish this week with 34 released.

OTHER SPECIES:  Most of the smaller game this week consisted of inshore species such as sierra and skipjacks, with a few groupers and nice yellowtail thrown in.  We also saw several small mako sharks, 20-50 lbs. released.  A couple of small wahoo were caught, but nothing over 30 lbs.  Dorado catches slowed way down with just six caught total for our fleet and tuna catches similar.  The anglers aboard Valerie on March 22nd, weren’t concerned about the size of their catch but were glad to have action for everybody on board as they caught twelve skipjacks, releasing four.  Bill Collector had a nice mixed day for Trey Parker and friends from Plano, Texas, with a mako shark, skipjack and striped marlin released at Destiladeras on March 27th.

WEATHER CONDITIONS: Warmer than usual, clear skies, windy on the Pacific, some swell late in the week.

Based the Catches of Pisces Sportfishing by Tracy Ehrenberg