BILLFISH: Marlin have been conspicuously absent from Cabo the past couple of months with just a few caught each week and though many more were sighted, getting them on a hook was a real challenge. Nevertheless towards the end of this report we began to see more of them and more anglers were rewarded with hooks ups and some even had multiple marlin days. It looks like things are about to change!  Pisces Bill Collector had an outstanding day for Todd Huerkamp and Laney Dobbs from Texas, fishing of Punta Gorda, where they manage to release THREE striped marlin on live bait, in the 100 to 130 LB class.  Yahoo had given up on the day and was heading back in when they were able to hook two striped marlin just three miles off of Lands’ End for Scott and Jim from Chicago. Andrea was the only other boat to have more than one marlin in a day, with a double header for Dane & Blake Wilson from Montana. Our boats caught a total of twenty six marlin this week, with many others spotted but not tempted.  However, Pisces anglers caught plenty of fish this report easily adding up to over 1000 fish, between all the different smaller species. In a way it’s been good that the marlin have been slow, as captains have been forced to try new techniques and fish for other species, developing skills that may have rusted a bit when the marlin is so plentiful. Some of the best catches were the mixed bag days that was perfect for families fishing over Easter as everybody on board got to catch something. A group visiting from New Jersey, fishing aboard Bill Collector and managed to release a striped marlin as well as a 150 LB pilot shark for the group headed up by Don Michael. Lake Schiefelbein and family had a great time on Ruthless released a striped marlin at Migrino then caught eight groupers, six ladyfish and a yellow tail. The Staver family from Chicago must have been tired after their outing on Valerie with a 160 LB striped marlin released as well as twenty one triggerfish, two groupers and a roosterfish to boot. 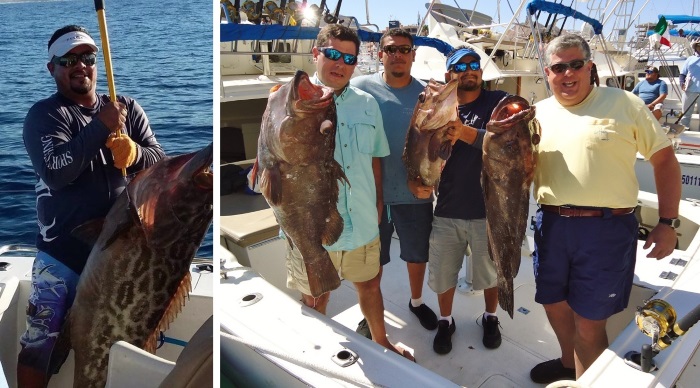 OTHER SPECIES: Eighty percent of our charters caught small game fish this week, though a few boats did get “skunked”, mainly those that opted for a half day. Those that took the full day had a bonanza on triggerfish – fun on ultra-light tackle- roosterfish, snappers, lady fish, Barbosas (slimeys), jack crevalle, sheephead, skipjacks, jack crevalle, sierra and various types and sizes of grouper. One of our pangas released a 150 LB hammerhead shark for Tom Kledzinski from Chicago, who also caught three skipjacks. Twenty eight foot Andrea had a busy day with anglers from Reno, Nevada on board, with a pilot shark released, fifteen ladyfish, three babosas and a grouper. Pisces Tiburon (which means shark) aptly released a large hammerhead shark for Mark Shmiedl from Ohio as well as good numbers of trigger and lady fish. The Saline’s and Bienkowskis from California fished together on Andrea and released a 100 LB thresher shark, eleven ladyfish, a grouper, yellowtail, ten triggerfish and two babosas. Tracy Ann had a nice day catching eight groupers, two of the unusual and beautiful sheephead, plus trigger and ladyfish. Yellowfin tuna catches were slow with just five percent of boats finding  this species.  Bill Collector was able to catch fourteen up to 25 LBs at San Jaime for Sam Sheriden and friends from Canada. The Richter party from Fayetteville, North Carolina were out with the crew on Knot Workin’ who are tuna aficionados – they got the anglers into the tuna and managed to land eight up to 40 LBS. Pisces Adriana caught a really nice 56 LB grouper for the Stephenson’s from Colorado who also caught another grouper, two sheephead, three red snapper, eight ladyfish and a couple of triggerfish.
WEATHER: Quite windy and overcast some days on Pacific, now clear and flat. Calmer seas on the Cortez.
LOCATION: Pacific for smaller game and tuna, Migrino, Margaritas, San Jaime, marlin starting to show up on Cortez side between Santa Maria and Punta Gorda.
AVERAGE WATER TEMP: 73 F
BEST LURES: live caballito, ballyhoo, bait chunks, cedar plugs.
Based on the catches of Pisces by Tracy Ehrenberg