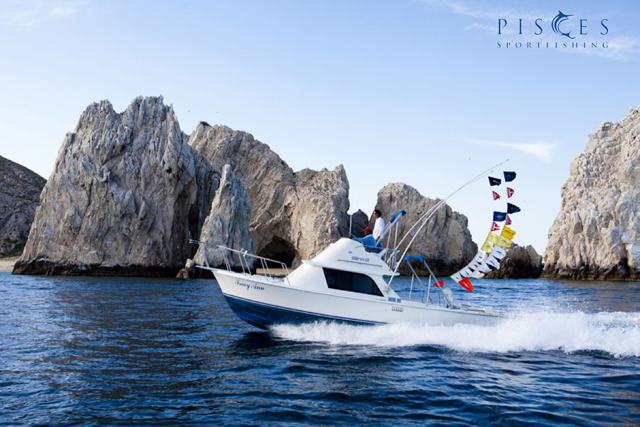 BILLFISH:  We are pleased to report an improvement in fishing this week both generally and for billfish.  Nevertheless it still could not be described as great.  Water temperatures remain higher than normal for this time of year which could be a factor.  More marlin were spotted this week but they tended to be fussy eaters.  We had catches at both ends of the spectrum of our fishing grounds, from Destiladeras on the Cortez side to Margaritas and Migrino on the Pacific side.  Top boat this week was Tracy Ann on March 30th for catching and releasing three striped marlin at Pozo de Cota for Jamie, Benjamin, Gretchen and James from Easly, South Carolina.  All three fish took live caballito and were of a good size at 140-160 lbs.  It was nice to see boats catching more than a single marlin and a little over a third of the charters managed two stripers and often some smaller game too.  Valerie, Tracy Ann, Attitude Adjustment, Adriana, La Brisa, Rebecca were all boats that caught more than one marlin in a day.  The fishing is becoming more consistent but has still not stabilized, for example on April 1st a lot of the boats were skunked despite spotting multiple marlin but the following day every boat out caught one to two marlin, even those on shorter days.  Fifty seven percent of Pisces Sportfishing boats caught marlin this week, giving us a total of 46 fish, all released, except one.

OTHER SPECIES: There was a not a lot of action on smaller game this week with dorado catches continuing to drop and just nine percent of boats finding the odd fish here and there whilst trolling for marlin.  Most of the dorado were taken on live bait on the Pacific and weighed from 20 to 30 lbs.  There were a half dozen mako sharks caught between 40 and 80 lbs.  Flora T had a very nice day on March 30th for Owen Kilmury from Huntsville, Alabama.  They caught and released a striped marlin, a 70 lb. mako shark, skipjack and sierra between Pozo de Cota and Migrino.  Other catches closer to shore were a few sierra, skipjacks, jack crevalle and the odd grouper.  These smaller game catches accounted for twenty nine percent of the fleet production.