Skip to content
Overall Catch Success Rate All Species Combined 58%
Numbers at a glance: Marlin 38%, Other 28% 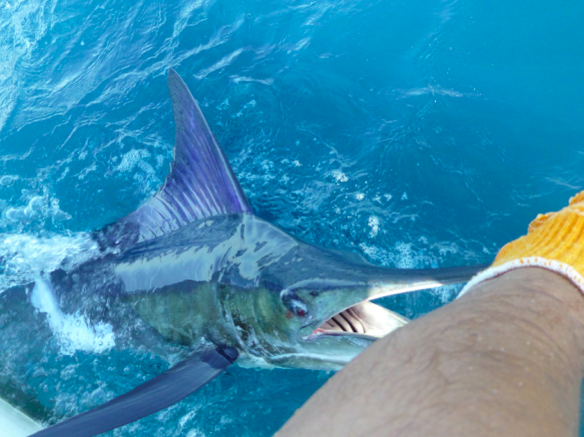 BILLFISH:  After a great couple of weeks of increasing catches and improvement in billfish rates, this last week was a bit disappointing, as we were slammed with huge ground swells causing the port to be closed to small vessels on a couple of days.  Added to this were some strong winds and full moon; a recipe for tough fishing.  This was frustrating for crews and anglers alike, but that said we still had marlin catches throughout the week with some days better than others.  We also heard of an eleven foot sailfish being caught and a small black marlin.  When fish were caught the most likely encounter was with striped marlin.  Catches started out at the 95 spot and 11.50 spot then gradually moved up the Sea of Cortez to Punta Gorda and Destiladeras.  The most any boat got was two marlin in a day, usually on live caballito, though there were some lure fish too.  The size on the stripers has increased slightly at 120 to 160 lbs.  Tracy Ann and La Brisa were two of the better boats this week with five marlin each.  Even though this report is a bit glum, we are not discouraged as the wind has died as we write this, the sun has come out and the moon is getting smaller.  The last day of this report nearly every boat had at least one marlin released.  Pisces anglers released 27 striped marlin this week.

OTHER SPECIES:  Most boats concentrated on marlin as that was the best odds of a catch this week, we did however get a couple of dorado.  La Brisa released a 45 lb. mako shark for Lovene Helt & Michael DeMeo from California.  This boat was also the only one to catch a wahoo this week, of average size at 35 lbs.  The port was closed a couple of days for pangas, which fish, so less smaller game was caught.  There were a couple of grouper, bonita, jack crevalle, needlefish, skipjack, triggerfish and sierra caught.