Skip to content
Overall Catch Success Rate All Species Combined 95%
Numbers at a glance: Billfish 89%, Other 43% 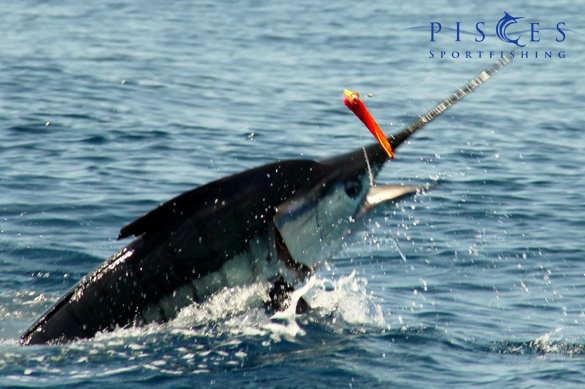 BILLFISH:  A superb week in Cabo with superb catches throughout the week.  The good old days are back!  Striped marlin were thick and a few sailfish and blue marlin were in the mix too.  The Papazyam family from Los Angeles had one of the best catches of the week when they released six striped marlin in one day aboard 28 ft. Adriana at the 11.50 spot, which has been holding impressive numbers of marlin for the past two weeks.  This same day May 24th Valerie released five marlin for another family from Los Angeles – these fish weighed from 100 to 150 lbs.  and were all caught on live bait, also at the 11.50 spot.  On May 26th, Flora T did very well to release six marlin for Robert & Trevor Patel from Atlanta.  A really outstanding day was had by C Rod for Robert & Debbie Adams and friends; they released four striped marlin, a 180 lb. thresher shark, 120 lb. pilot shark both released and a 20 lb. dorado for the table.  Ruthless released five marlin for John & Katie Staples and we had many catches like this as the week went on.  Anglers regularly caught and released between one and five marlin, as well as many sharks. Attitude Adjustment was our only boat to catch a blue marlin, just under 200 lbs., and this one was caught five miles outside the 11.50.  Pisces Sportfishing anglers caught a total of 154 striped marlin, 1 blue marlin and 2 sailfish; all but two fish were released.

OTHER SPECIES:  A lot of sharks were caught this week and many of a good size in  the 80 to 180 lb. class.  The most abundant was the pilot shark, which we believe is a silky shark – we had twenty two of these this week, as well as three thresher sharks, one bull shark and one mako shark.  Some boats caught as many as three sharks in a day.  It should be noted that all sharks are being released at this time as there is a ban on taking these until July 31st.  Just a smattering of dorado were caught.  Inshore fishing had some slow days, where pangas got skunked but on other days they did well on jack crevalle, grouper and triggerfish.  Roosterfish, wahoo, group and skipjacks were caught in lesser amounts.