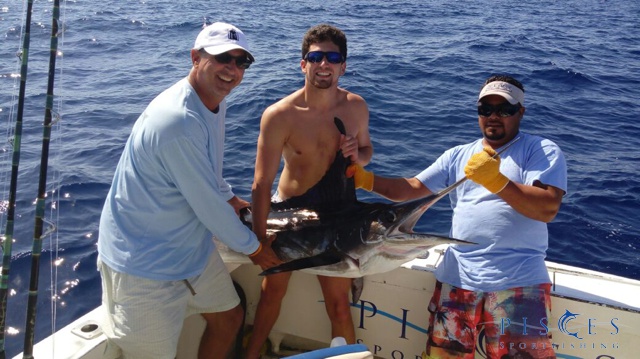 Greg & Zane Cantrell from Tennessee release a striper aboard Andrea

BILLFISH:  Even with a full moon this week, billfish catches were very good. The striped marlin are still present in good numbers with the 11.50 spot still holding as the top location.  As the week progressed the weather became very muggy as a depression formed below us that turned into Hurricane Blanca – not all bad, that kind of weather, when it gets really hot, produces blue marlin and we had two this week.  Speedwell had anglers Dave Thelen, Scott Wolf & Emily West on board when they hooked blue marlin on a guacamaya lure that was estimated at 230 lbs.  – they also caught a 20 lb. dorado.  On the last day of this report Valerie  had anglers from Alberta, Canada n board, headed up by Daniel Loeb – their fish also took a lure, but a yellow and green one and was estimated at 250 lbs.  The striped marlin stuck to live bait and Yahoo was fortunate to release five marlin up to 150 lbs. just below the 11.50 spot for Carey & Richard Kernion and friends.  This same day, June 1st, Tracy Ann was not far behind with four marlin in the same class for the Ross family from Lufkin, Texas.  There were plenty of other catches of one to three fish per boat per day and even a sailfish.  Marlin were by far the most abundant species this week accounting for sixty nine percent of the catch.  Pisces anglers caught a total of 73 billfish consisting of 70 striped marlin, 2 blue marlin and 1 sailfish – 98% were released. 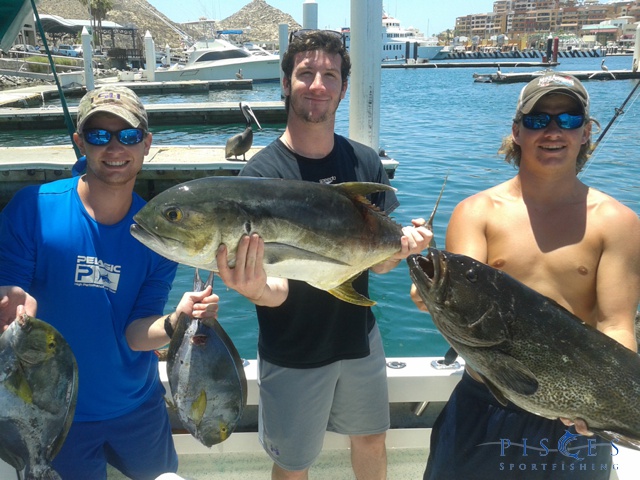 OTHER SPECIES:  Over a decade ago catching sharks was quite common, then we went through dry years where hardly any were caught and when they were, they were small in the 20 to 40 lb. class.  Thing have changed and they have made a comeback with multiple shark catches common right now and of different varieties.  For instance on May 30th Yahoo had an outstanding day for the Bryan family from Mississippi, releasing two striped marlin two thresher sharks over 100 lbs. and one pilot shark around 80 lbs.  D.J Novotney also released two thresher sharks around 120 lbs. plus a striped marlin aboard C Rod and Valerie released three pilot sharks between 70 and 80 lbs. as well as landing our only tuna of the week for David McBride and party from Louisiana. Our only wahoo of the week was a 40 lb’er caught aboard  Bill Collector by Mark Chiavetta.  The pangas we sent out caught jack crevalle, grouper, triggerfish, sheephead and bonitas.

WEATHER: Hot and humid all week, with tropical storm Blanca causing the port to be closed at present.