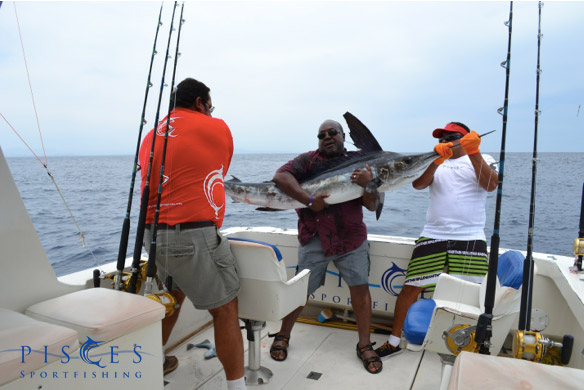 Hugh Williams from Ohio aboard Andrea with his first ever marlin.

BILLFISH:  Once again we had an up and down week with unusually cooler and windy weather as well as unseasonal rain on Thursday.  After a flurry of good catches the fishing again started out on the inconsistent side, with choppy seas and crews often spotting numbers of marlin in the Punta Gorda area who were reluctant to take the bait offered by some boats, but others fishing the same area the same day did manage to hook up a few.  As the week progressed the catches began to improve with Rebecca leading the way on May 10th with two striped marlin and a mako shark released off of Palmilla for Darryl & Jill Yarbrough.  The next day out Neil Darling & Wade Ryan from Canada, did really well to release four striped marlin up to 120 lbs. at the 11.50 spot aboard C Rod. Fishing alongside them was Cabolero with three marlin released for Kevin & Holly Corlton.  By May 12th nearly every boat from Pisces had one to three marlin, with Tracy Ann & Valerie topping the report this day and the majority of catches at the 11.50 spot.  The day before this we had a first on the Valerie with angler Vincent Biesiot from North Dakota; he released a 130 lb. striped marlin, not unusual, but then the crew spotted a whale shark behind the boat and gave Vincent and his buddy the opportunity of a lifetime to jump in and swim with the gentle giant – rare to do on a fishing trip.  At the close of the report C Rod excelled with five striped marlin released on May 15th for Casey Stencil and friends again at the 11.50 spot.  Striped marlin where the top catch in Cabo this week with sixty five percent of our boats catching a total of 78 fish; all but one released. 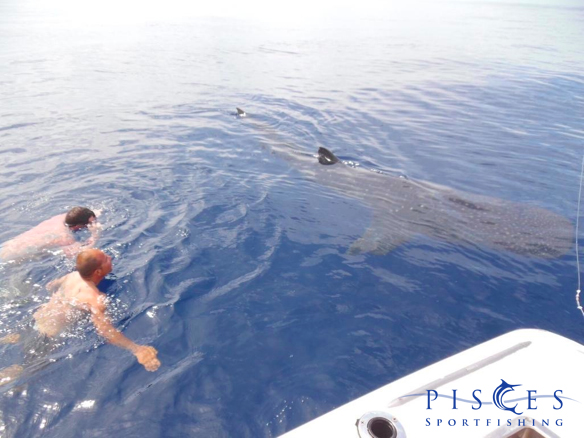 Once in a lifetime chance, Vincent Biesiot & buddy swim with a whale shark during their trip aboard Valerie

OTHER SPECIES:  We have a lot of sharks in the area right now and after marlin they were the most caught fish. We had mako’s, blues and pilot sharks – a local name given that is hard to identify; hopefully we will have a picture of one soon to be able to do some sleuthing.  Rebecca released a 70 lb. mako off of Palmilla on May 10th.  Bill Collector released four pilot sharks up to 150 lbs., plus a striped marlin for Brian Cooper from Phoenix on May 12th.  Whilst La Brisa released three pilot sharks between 80 and 100 lbs. for Gary, Mike & Linda Wagner at the 11.50 spot on May 15th.  It should be mentioned that there is as “veda” in place for sharks put in place by the Mexican fisheries department, this means that no sharks can be killed, though they can be caught and released.  The period of abstention from killing sharks is from May 1st to July 31st.  They make beautiful mounts so replicas are recommended for this species.  Very few dorado were caught this week, the only exception was Tracy Ann with four caught at Los Arcos on the small side at around 12 lbs., they also managed to release two large striped marlin, estimated at 160 & 180 lbs. at the 95 spot for the Eppes family from Fairfield, Texas.  There were no real numbers on other small game fish but a few sierra, grouper, skipjacks, jack crevalle, triggerfish and snappers were caught. 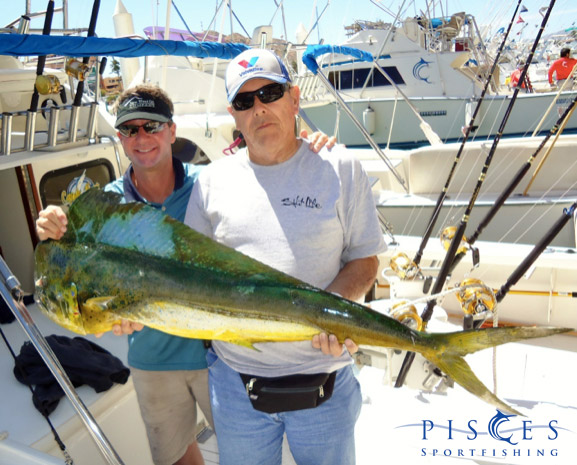