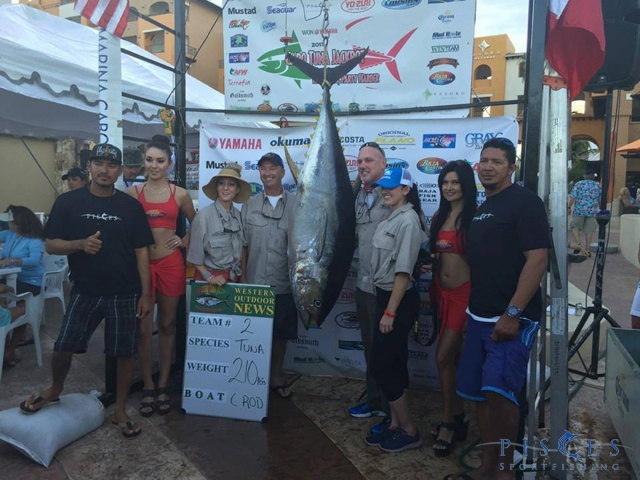 BILLFISH:  The top story this week was the Los Cabos Tuna Jackpot, popular Tuna Tournament, a yearly two day fishing competition now in its 16th year.  This fun event drew 143 teams and over 500 anglers.  As tuna were the target species many teams opted to fish practice days so the marlin count went down somewhat this week.  Pisces Listo got off to a good start by releasing a smallish blue marlin and boating four dorado at Los Arcos for Robert & Laura Coffelt from Pennsylvania, while on this same day Valerie managed to release two striped marlin, a sailfish and boat a dorado for anglers from Mount Pleasant, South Carolina.  Listo scored their second blue marlin of the week on November 3rd, at the Golden Gate as well as catching four dorado for John Amsler and friends from Austin, Texas.  The biggest fish of the week for us was aboard Pisces Tiburon, a blue marlin estimated at 310 LBS, which was released along with a striped marlin, at San Jaime by Mike Casey from Wareham, Massachusetts.  Robert and Lisa Lindquist from Sandy, Oregon had an off the charts day aboard the ever popular Tracy Ann when they released three striped marlin, two sailfish, a roosterfish and five dorado – it doesn’t get much better than that.  Even during the tuna tournament the blue marlin kept coming – Andrea had a blue released thirty eight miles out after it an orange and black lure for Keith Gelfand.  This same day La Brisa released a small blue marlin, around 200 LBS.  Pisces Cabolero a 31 ft. Cabo Express, released two blue marlin and a striped marlin during the tuna tournament for Canadian anglers headed up by Jim and Lane Hyslop. Attitude Adjustment was another boat to release a blue around the 200 lb. mark.  Overall a great week, with lots of anglers having fun and catching a ton of fish, even if they weren’t always the species they wanted.  Pisces anglers caught a total of 40 striped marlin, 8 blue marlin and 10 sailfish this week; all but one were released.

OTHER SPECIES:  Tuna was on everybody’s mind and radar but it was a shame that the numbers dropped this week as several seiners moved in to the area and beat a lot of the boats to the big fish, of course there were still plenty of qualifiers out there with  thirteen fish over 100 LBS and several other qualifiers.  The dorado category was a tough one to fill, even though many of this species were caught  it was hard to find one that could make the minimum weight of 30 LBS, in fact only was weighed in at 31 LBS sending the anglers wild for a few minutes, thinking they had won $50,800 for their fish.  Their dream was short lived however, as five minutes later as the tournament drew to a close, Gladiator pulled up with a 49 LB wahoo that knocked the dorado out of the running.  Of course we are very proud of Pisces C Rod who took top honors with a 210 LB tuna and of Ruthless who took biggest wahoo on day one with a 36.9 LB fish.  Details of winners and prizes at the end of this report.  Dorado was the most frequently caught fish this week with sixty five percent of charters catching between one and sixteen fish in a day in the 12 to 25 LB class.  The dorado were found spread out along the Pacific coast and took live caballito, ballyhoo and different lures – in other words they were hungry.  Rebecca caught over a dozen of at Los Arcos for Dan and Dawn from Cody, Wyoming.  Top dorado boat though was Tracy Ann with sixteen in a day plus a striped marlin at Los Arcos for Glenn Rogne and Jim Vasi from Florida.  Pisces anglers caught a total of 377 dorado this week.  As mentioned above tuna catches could have been better and boats went far and wide trying to track down a winner.  The guys from Maybe Manana that took second place and earned themselves a payday of over $200,000 told us that they went far, over forty miles and when they got there the tuna seiners were wrapping up all the fish, but they figured one or two had to escape; they didn’t lose heart and stayed close by which enabled them to land a nice 198 LB fish.  Other boats, such as Bill Collector found the tuna at San Jaime and were able to catch seventeen on November 3rd but all were small school size fish.  Pisces anglers caught a total of 74 tuna this week.  We had a few wahoo up to 36 LBS and a couple of sharks, pilot and hammerhead, both released.  Inshore it was nice to see some roosterfish showing up and gaining a little consistency.

WEATHER CONDITIONS:  November is the best time of year -clear sunny days and cool nights; seas were calm inshore but a little rough out where the tuna were. 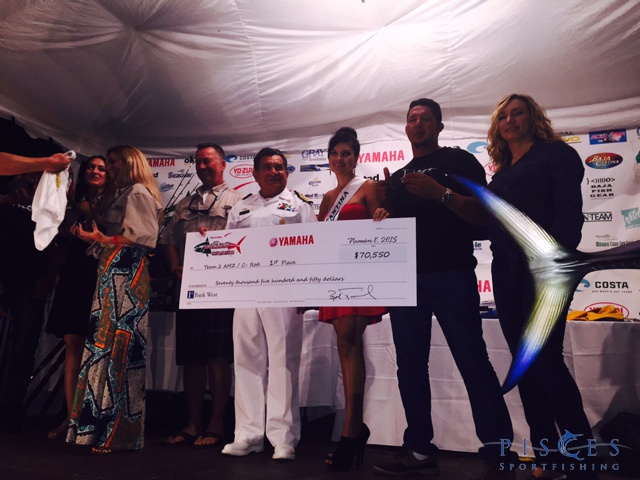 Daily jackpots offered in this tournament are: