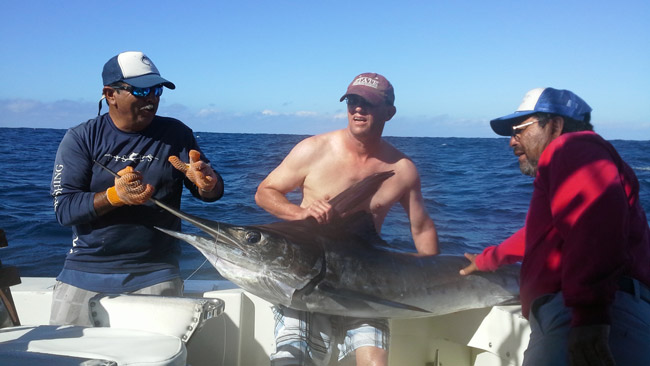 On the photo: Charles Snyder from Texas, Jeff McGuffin and Greg Taylor from New Mexico, were fishing last week aboard Valerie and had time of their lives. Pictured with marlin, before they released it back to the sea.

BILLFISH: What a time to be in Cabo, truly there is no better time of year, the weather is fantastic and the fishing incredible – whales are starting to show up too.  Temperatures are a little warmer than usual which could account for the late season blue & black marlin and sailfish that were caught this last week.  Bill Collector has to be boat of the week for a couple of red hot days, starting with November 22nd, when anglers Michael Romero & Trent Warness from Oregon were on board.  They did what many anglers long to do in a lifetime, let alone in one day.  They caught and released a 350 lb. black marlin, released a 250 lb. blue marlin and four striped marlin, as well as catching two dorado!  All this just one mile from Los Arcos – an outstanding achievement; three types of billfish in one day, including an elusive black.  A couple of days later Captain Julio from Bill Collector had Dan Whiteside and friends from Corpus Christi, Texas on board as they headed up the Pacific to Golden Gate.  They had a great time releasing a 250 lb. blue marlin, as well as two striped marlin around the 100 lb. mark, nine tuna and a dorado.  Our friends from Sweden made their annual trip to Cabo and fished a total of eight days, we still haven’t been able to tally their catches but they did extremely well.  One highlight was for Kjell Ljunggren, Stefan Trumstedt & Jen Bergstrom, aboard Rebecca with five striped marlin and two sailfish released, plus three dorado on November 22nd.  Group leader for the Swedes is Anders Lundgren, who fished with Mikko Pederson and Lars Papp aboard Tracy Ann had a fun but exhausting day on the 23rd, releasing six striped marlin and catching fifteen tuna and two dorado.  Live bait was the most effective way to get hooked up to a billfish this week, with the Pacific producing most catches.  Seventy seven percent of Pisces anglers caught billfish this week, giving us a total catch off 110 fish, consisting of 100 striped marlin, 4 blue marlin, 1 black marlin and 5 sailfish.

OTHER SPECIES:  Dorado and tuna remain in the area, but should start to decline as we head into December, nevertheless, with the warmer seas, they may just choose to stick around.  Forty eight percent of our boats caught between one and six dorado, most on the small side and hence released.  Tuna catches were slightly lower than those of dorado with forty five percent of our charters catching one to twenty plus tuna, though none were of notable size this week, but rather in the 15 to 30 lb. class.  There were a few small wahoo caught and inshore some sierra, roosters, triggerfish, grouper and skipjacks.

Based on the catches of Pisces SportFishing by Tracy Ehrenberg