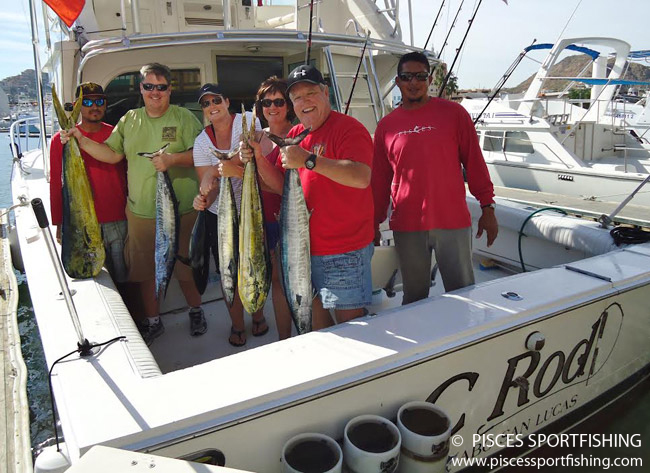 BILLFISH:  Billfish were surprisingly slow this week in comparison to other species caught, but it may have been because people were not going out of their way to find them.  Most of the fish this week were close to shore, so many boats preferred to head up the Pacific coast only a few miles out and catch some nice wahoo and dorado instead of looking for marlin.  However,  La Brisa was one of the boats to show us that if you were looking for the billfish you would find them.  They caught eight striped marlin, all released, ranging from 80 to 140 lbs, out of Golden Gate.  They also managed to catch three nice sized dorados close to Migri?o averaging 25 lbs.

On the same day, the Andrea and anglers Blake and Trevor from Texas, managed to catch and release one sailfish and one striped marlin out of Las Margaritas, and also find luck at Migri?o with three dorados and one wahoo.

Finally, the Ruthless managed to pull off and impressive half day of fishing, catching two striped marlin, around 120 and 140 lbs., which they released, as well as three dorado; making it back to the dock by 11:30 am.

OTHER SPECIES:  This week was most certainly the week for wahoo.  We saw a few very nice sized wahoo making it to the scales, such as the 40 lb wahoo caught on the C-Rod by angler Baxton from CA.  In addition to this wahoo Baxton and friends caught four more wahoos ranging from 15 to 20 lbs, four dorados, one yellowfin tuna and one striped marlin which was released.  All small game fish were caught out at Gaspare?o, while the marlin was caught at Pozo Cota.

The Tiburon crew and anglers Terry and Mathew had an excellent time fishing on this same day, catching eight wahoo!  They landed one of the biggest seen this week, weighing it in at 48 lbs, with the rest ranging from 15-20 lbs.  They also caught and released one striped marlin out at Golden Gate, while the wahoos were found at La Ballena.  Wahoos hit on rappala lures, green and black/red.

As for the dorados, the Ruthless and anglers from Indiana showed us that the mahi are still around, and in good size too.  They caught twelve of them all around 20 lbs out by Golden Gate on green lures.  They released five dorado as well as one striped marlin and, to top it off, caught three wahoo as well.  The wahoo bit on tigrillo lures and weighed about 20 lbs.

The tuna on the other hand did slow down a bit, but also because most anglers were interested in the fish closer to shore.  The tunas have been out a little further, but even with this, the Andrea and anglers from California managed to catch eight on feathers and cedar plugs out of Elias Calles.

The Valerie really committed to find their anglers the tuna they wanted, going 30 miles out from the Lighthouse, and it paid off, they landed thirteen tunas all averaging from 15 to 25 lbs. They also caught and released a nice sized striped marlin of about 160 lbs.  The marlin was caught on caballito bait, while the tunas were caught on feathers.

Other small game seen this week were a few small sardine sharks that were released on the Knot Working, caught along with three yellowfins 22 miles out of the 200 spot.

The Cabolero was a fine example of the many other small game fish caught this week, with one roosterfish, released, five sierras, one needlefish and one amberjack all caught in the same day out of the Lighthouse and Los Arcos.