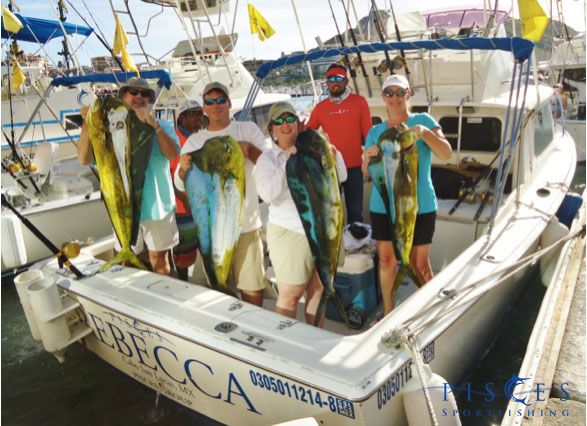 BILLFISH: Marlin fishing is in a transition stage right now, that is, the catches are still good, but we are waiting for an influx of striped marlin from further up the Pacific.  In the meantime we are still seeing catches of late season blue & black marlin as well as sailfish.  Weather is starting to change which means fishing can be less consistent on a daily basis.  Hot Rod, the latest addition to the fleet is already proving to be one of our best & this crew did not disappoint for Dave Bulthuis, Costa Del Mar tournament sponsor, when they were able to release his son Chet’s first ever blue marlin which was tagged & released, estimated at 220 LBS on November 7th.  This wasn’t the only great catch this day; Pisces Yahoo released a much sought after black marlin, not huge at around 160 LBS, but nevertheless a nice catch for Craig Bentham from Canada Dan Brendes & friends had a great day out aboard Pisces Listo on November 10th when they were able to release three striped marlin & boat four dorado up to 20 LBS at Pozo de Cota.  Out this same day was the Mercier group from Florida aboard Pisces Valerie who did even a little better with four striped marlin released & three dorado boated.  Not to be left out and with a respectable catch of three marlin released & eight dorado was Yahoo with Florida anglers Francesca & George Filafas. Pisces Tracy Ann always seems to make the fish report & this week was no exception; on November 12th, Corey Hopkins, Ron & Paige Simonson fished outside the Herradura & did very well to catch & release a blue marlin, two striped marlin & eight yellow fin tuna.  Pretty much all the catches were on the Pacific side.  Forty three percent of Pisces anglers caught a total of 66 billfish this week, consisting of 60 striped marlin, 2 blue marlin, 1 black marlin & 3 sailfish. 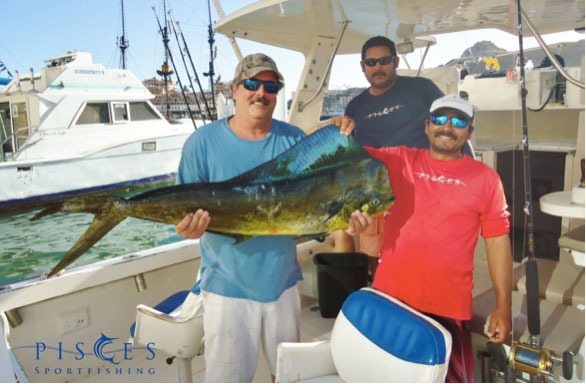 OTHER SPECIES: Dorado was the most popular catch this week with a respectable 213 fish caught by sixty percent of our anglers.  Catches ranged from one to eleven fish with weights from 15 to 30 LBS.  Pisces La Brisa had one of the better dorado catches with eleven caught off of Elias Calles, plus a striped marlin released, a little further up at Golden Gate for George Fee & party from New Jersey.  Another boat to do well & keep their anglers busy all day was Pisces Rebecca with ten dorado, one roosterfish & one needlefish.  Another high dorado boat was Tracy Ann with not only eight dorado, but two striped marlin released & two roosterfish for British anglers Gary Morrison & Kevin Moreton.  Although lures did work, live caballito was definitely the way to get more hook ups.  Tuna catches were on a par with last week at sixteen percent, but when found the catches tended to be multiple & up to fourteen fish, though the norm was three to ten fish.  Our total tuna catch was of 92 fish.  Roosterfish increased slightly but were seldom bigger than 10 or 15 LBS. Inshore triggerfish, needlefish, bonitas, skipjacks & sierra were all caught but in conservative quantities.

LOCATION: Old Lighthouse to Golden Gate on the Pacific.

WEATHER CONDITIONS: November is our favorite time of the year, sunny with calm seas.