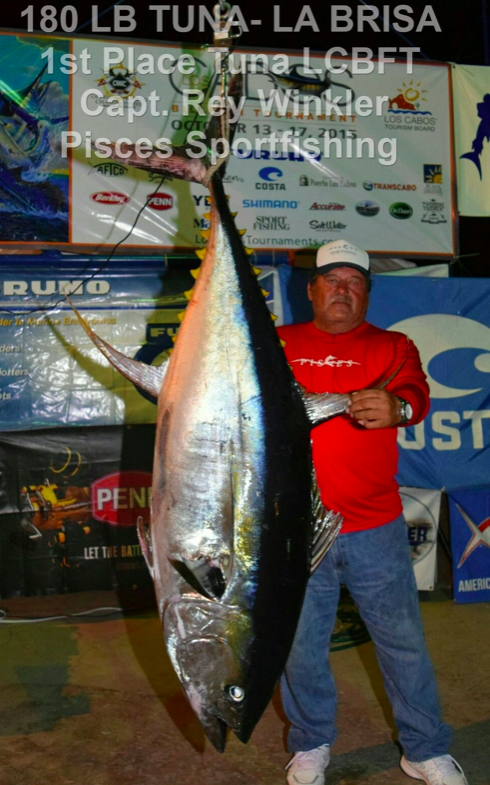 BILLFISH:  An exciting week with the lead up to tournament season preceded by 48 hours of steady rain this past Saturday and Sunday.   Fishing remained steady and varied, with plenty of billfish, including pretty good numbers of small blue marlin, striped marlin and sailfish.  Fishing conditions were not much fun in the rain and many anglers opted to turn around and come back in after only a few hours; those that stuck it out though tended to do well, such as Patrick & Jeanne Neville from Bradenton, Florida who released four striped marlin aboard their favorite boat Tracy Ann .  We don’t easily forget this couple as a few years ago they caught a 700 lbs. plus blue marlin the day before the Bisbee tournament.  Another boat that did well was Hot Rod with both a blue and striped marlin released for Joseph Munck from Alabama.  Daniel Ryan did very well aboard the boat he has been fishing for years Rebecca with a blue marlin released, two striped marlin and fifteen tuna – showing his friend aboard a great day of Cabo fishing.  Tiburon our newest 31 ft. Bertram showed Jeff & Tom from Post Falls, Idaho a great time catching a striped marlin, sailfish, pilot shark and tuna.  Texans always seem to be lucky anglers and this week was no exception – Jennifer and Jeremy from Abilene had a busy day aboard 31 ft. Bertram La Brisa releasing four sailfish and a blue marlin on October 12th, 18 miles from the 150 spot.  Beto Lira new captain aboard Ruthless is already showing his fishing prowess and managed to put Tim and Brenda from Minneapolis, fishing with friends Carolina and Eliel from Cabo on a lot of fish, actually three striped marlin and three sailfish outside the Herradura- all released.  This same day Tracy Ann released three sailfish and a striper and Cabolero had a blue marlin, striped marlin and ten tuna for Dale Hanes from Pennsylvania.  Most unusual catch this week was a spearfish, estimated at 40 lbs., released along with a striped marlin aboard Andrea on October 16th.  Pisces anglers caught a total of 111 billfish this week consisting of 57 striped marlin, 42 sailfish, 11 blue marlin and 1 spearfish  – all but one fish released.  The Los Cabos Billfish Tournament got underway on Wednesday with thirty seven teams signed up for this well run event.  Day one saw Reel Energy come to the scale with a 419 lb. black marlin and plenty of smaller billfish released.  Day two the well-known El  Suertudo team made it back with a 312 lb. blue marlin – the third day did not produce any fish over 300 LBS, so these two fish will take the lion’s share of the purse at the awards dinner scheduled for this Saturday night.  A total of 138 billfish were caught in this three day tournament, all released except for the two qualifying fish.  El Suertudo was across the board and should receive a large payout.  Reel Gold will take the release prize with 1300 points.  Largest tuna was by our very own La Brisa for a beautiful 180 lb. tuna that took the anglers five hours to land, team captain Frank Bono was tired but happy.  As we write this the Bisbee Offshore is in its first day of the two day competition with 94 teams competing. The main event, Bisbee Black & Blue begins first day of fishing on Wednesday.

OTHER SPECIES: Tuna fishing was good this week, which bodes well for the upcoming Tuna Jackpot tournament.  Apart from the 180 LB’er mentioned above, Bill Collector also had a nice 135 lb. tuna in the tournament caught in the same area at San Jaime.  Gary Jones from Australia landed a nice 150 lb. tuna aboard C Rod after it took a purple lure 25 miles out from the Lighthouse.  These were the biggest fish for us this week but there were plenty of other smaller ones, giving us a tuna catch success rate of forty two percent and a total catch of 163 fish.  Dorado catches remain slow, with no qualifiers weighed in the tournament but with a smattering caught by our regular charter clients up to 30 lbs. in weight.  Just a few wahoo caught in the 20 to 30 lb. class and inshore a few roosterfish and skipjacks.

WEATHER: Rain for almost 48 hours at the beginning of this period now clear skies, mostly flat seas and a return to hotter weather.

LOCATION: Pacific from Lands’ End to San Jaime, some boats off of the 11.50 two to 30 miles offshore.