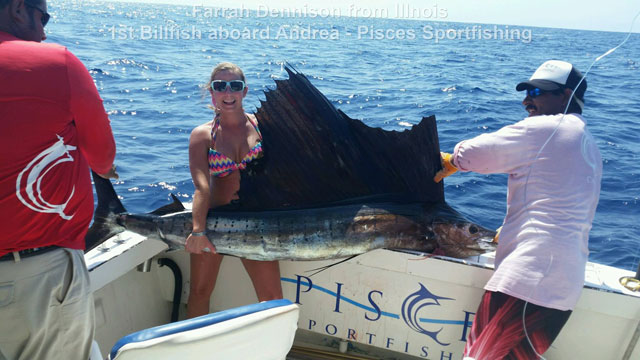 BILLFISH:  An exciting week in Cabo culminating in the Bisbee Black & Blue Marlin Tournament resulting in a huge payday for Costa Rican charter boat Tranquilo, not only did they win the Bisbee Offshore they took third place in the Black & Blue with a 327 lb. blue marlin, but because they were in all the different jackpots they took home more dinero than first or second place – $2,511,462.00 USD was added to the cash they had already won a few days before to give them a grand total of $2,971,662.00 and yes, that is dollars.  First place was taken by local charter boat Rondinella for a 500 lb. blue marlin on the last day for a group of Canadian anglers headed up by Tyler Squire which netted them $356,255.00.  Second place also went to another local charter boat, what a Journey for Texan anglers who landed a 356 lb. blue and took $156,937.00 in prize money.  Although regular charter business was brisk and productive the same could not be said of the tournament fishing resulting in one of the slowest Bisbee’s we can remember.  Of the 121 teams competing over three days only three qualifying fish were weighed in.  Pisces Sportfishing boats competing did quite well with Ruthless releasing a blue marlin each day, unfortunately though the anglers had not entered the release division (take note..always enter the release division).  The top release boat only had two and won $72,000.00!  In regular business we had some superb catches; Tracy Ann released ten striped marlin on the Pacific side for Patrick & Jeanne Neville from Bradenton, Florida on October 17th – this same day the panga Gloria managed to release four marlin for British angler Devine Jones.  Tiburon released a 300 LB blue marlin and boated eight tuna for Barb & Keith Mehlenbacher at the Jaime Bank.  Tracy Ann cranked it up again on October 20th and managed to catch eight striped marlin at Golden Gate for the Roxbergs from Minnesota.  This same day 28 ft. Andrea released five striped marlin up to 180 lbs. for Doug Logan and friends from Seattle, who also boated a dorado.  Though not in the tournament our 35 ft. Cabo Knot Workin landed a 354 LB blue marlin for a group from Texas on a day where no qualifying fish were weighed at the tournament.  Boats fishing in the tournament were only targeting blue and black marlin, so our catch rate is a little lower than it could have been, as there was plenty of striped marlin around.  Pisces anglers caught a total of 135 striped marlin, 11 sailfish and 9 blue marlin.

OTHER SPECIES:  Tuna catches were good this week with a total of 228 fish caught by our anglers, with catches ranging from one to eighteen fish in a day.  A little under half of the boats managed to land this tasty species and some were of a good size which bodes well for the upcoming WON Tuna Tournament.  Flora T II  landed a nice fish that weighed in at 147 LBS which they caught with a skipjack (is that cannibalism?) for angler Andre Gauron.  On October 19th 28 ft. Andrea had a great day for Felix Forjet and friends at San Jaime, where they caught seven tuna up to 110 lbs. and released a striped marlin too.  Cabolero did well with Alaskan anglers on board when they caught nine tuna up to 100 LBS, plus a nice wahoo and sailfish released.  Lots of sharks around at the moment – Bill Collector released five pilot sharks and boated a dozen tuna for Richard Prather & Meli Baum from Texas. Another one of our boats released an aggressive bull shark.  Other catches were the odd roosterfish, skipjacks, wahoo and a couple of early sierra.

LOCATION: San Jaime was the top spot  – also from the Lighthouse to Golden Gate on the Pacific.

WEATHER CONDITIONS: A couple of rough days with wind blowing from both sides now calm.