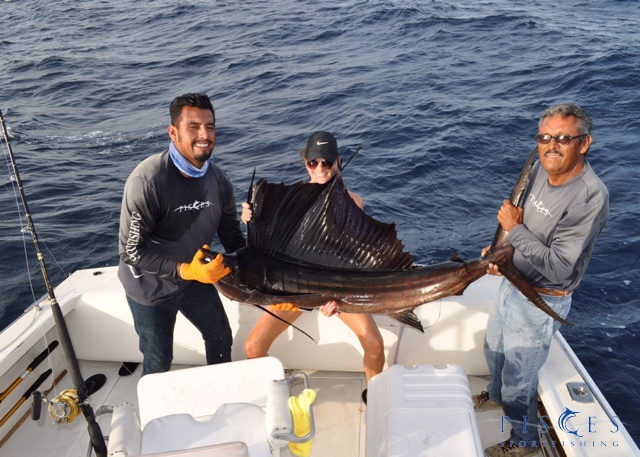 BILLFISH:  One of the best weeks of the year for billfish, even though the port was closed for two days due to the proximity of Hurricane Linda.  The biggest fish we’ve seen so far this year was landed off of San Jose aboard a 22 ft. panga Viviana I on September 11th by local angler Carlos Cota Lucero.  The huge black marlin weighed in at 765 lbs. and took just two and a half hours to boat.  The next day this same location produced another black marlin, caught aboard Alexandriana with Captain Antonio Guluarte; this fish was 436 lbs. and took a Chiwilie lure at the Inner Gordo Bank – thanks to Erick from La Playita for passing us the news on these two admirable fish.  Early on in the week we had some smaller blue marlin, such as one landed aboard Contessa 85 feet out on a pleasure cruise; the fish was estimated at a little over 100 lbs. and was caught by the Valbh family from Florida just one mile out for the arch.  This same day Australian angler Brett Hewerdine and friends fished aboard 55 ft. Flora T and were thrilled to release a 250 lb. blue marlin they caught at Punta Gorda on a petrolero lure, as well as a wahoo, dorado and skipjack.  On September 7th Bill Collector did really well to release a blue marlin and two sailfish at the 11.50 spot for Jennifer Hill & Stephen Kelly from Texas.  This same day fellow Texan Clint Herbst and friends were out on Listo but on the Pacific side, 32 miles out form the Old Lighthouse, where they released two sailfish, a striped marlin and boated three tuna up to 120 lbs.  Tracy Ann fished in close this day at 4 miles and released a 250 lb. blue marlin for Arkansas anglers Craig and Donna Wing.  Most anglers shut out by the rain on the 8th & 9th shut out by the rain, were able to reschedule which was a good thing, as fishing seemed to get even better.  Tracy Ann picked the pace right up after two day in port and scored two striped marlin and two sailfish for Thomas & Rebecca Hobb from Pikeville, Kentucky on September 10th at the 95 spot.  To close out the week Cabolero had an outstanding catch of five sailfish and a striped marlin nine miles out from Lands’ End by Aaron & Charles Earnhardt from Tennessee.  Not far behind, it was again Tracy Ann  with three sailfish and striped marlin released at the 11.50 spot for Jeff Anderson fishing with Jeremy & Amy Ross, all on live bait, this same day.  Billfish were the most common catch this week, with seventy nine percent of our charters catching big game species.  Pisces anglers caught a total of 54 billfish consisting of 18 striped marlin, 32 sailfish and 4 blue marlin. 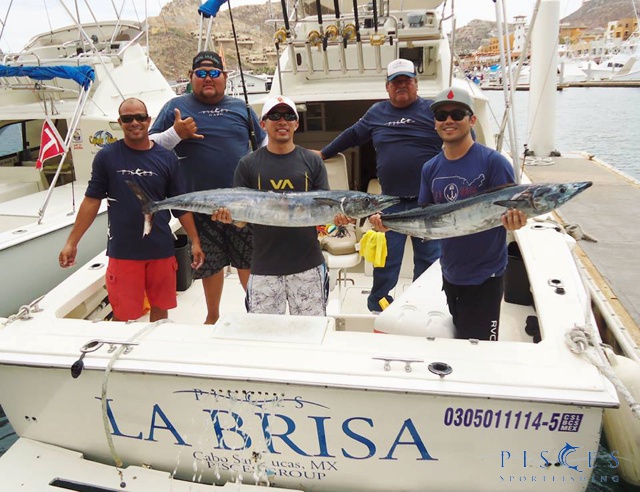 OTHER SPECIES:  This week we did see an improvement on smaller game with twenty one percent of boats landing dorado, however, catches were seldom more than one or two fish and usually no bigger than 15 lbs.  Tuna catches were a bit slower at fifteen percent but some of the fish did have some size to them at the 100 lb. plus mark.  We also know of a 300 lb. plus tuna caught aboard Fourplay out of La Playita.  Wahoo were a blessing this week with catches of this tasty fish quite steady with catches of up to three fish per boat as large as 50 lbs. Inshore triggerfish, grouper and skipjacks were caught.  One of the pangas we sent, Tres Amigos, did exceptionally well to release a sailfish and a hammerhead shark and catch eight tuna up to 20 lbs. for William Morris & Frank Brown from Texas. 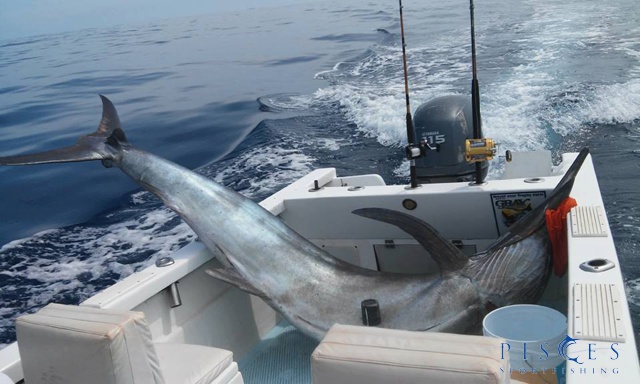 LOCATION: Boats fished both sides the Pacific and the Cortez, with Punta Gorda producing some of the bigger fish, other locations were Old Lighthouse, Lands’ End, 11.50 spot and Pozo de Cota.