December 28th to January 3rd, 2014
Overall Catch Success Rate All Species Combined 94%
Numbers at a glance: Marlin 45%, Dorado 69%, Tuna 6%, Other 11%
BILLFISH: Catches of striped marlin were quite steady this week, but we are not seeing the numbers yet that we would like. Boats continue to stack up off of the Old Lighthouse about a mile or so offshore and are soaking baits. We are still in the odd period where marlin are on the bottom feeding. This usually lasts around three weeks, but it can be frustrating as you need to sit all day amongst a crowd of boats and may only get one fish for a days’ patience. We counted eighty five boats in an area of about one square mile on January 2nd.  Other captains decided they didn’t want any part of that and preferred to cruise up the coast in search of dorado and perhaps pick up a stray marlin as they are also being spotted on the surface in some places. One boat that did beat the odds was Pisces Fearless on December 29th, when they caught and released five marlin up to 120 lbs. Jason & Kristina Armstrong, fishing with Scott & Ava Lessing from Palo Alto, California. Greg Stewart from Plain City, Alabama had a fabulous day out on Pisces Yahoo, releasing three striped marlin close to Golden Gate and catching thirteen dorado off of Elias Calles. This same boat had a triple marlin day earlier in the week this time off of the Old Lighthouse for Jay Alexander from Georgia.  Generally the average marlin catch was of one fish and less occasionally two, a little under half of the boats caught marlin this week giving us a total count of 50 caught and released. 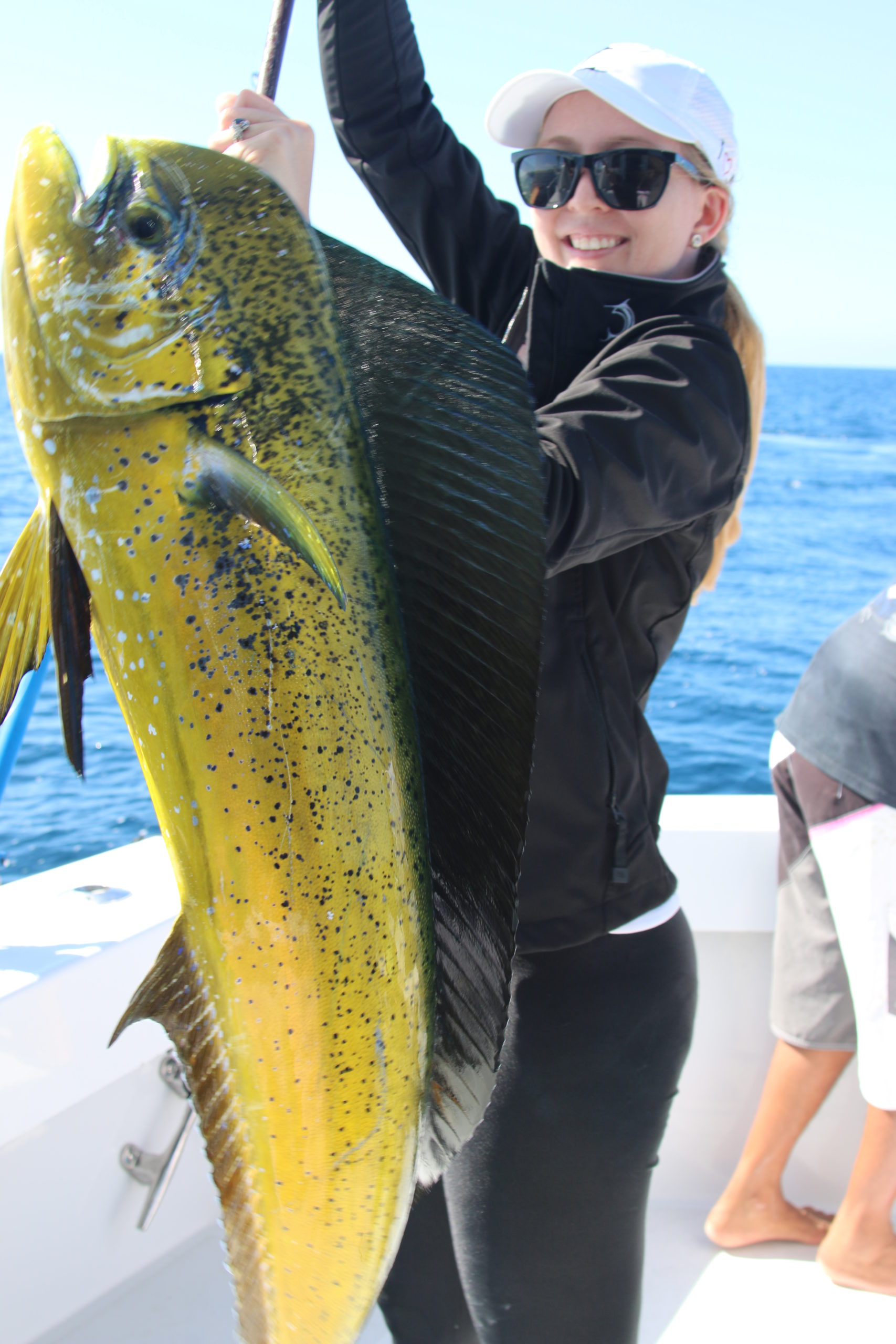 OTHER SPECIES: Dorado really boosted the catches this week, with good numbers of fish in the 10 to 35 lb. class caught every day. A lot of the smaller fish were released, whilst the larger ones were boated for anglers to take home or have cooked here in Cabo. The better locations for dorado were those close to shore, perhaps a mile out, in the areas from San Cristobal to Elias Calles. They took both bait and lures and were great fun on light tackle and stand up gear. They were the most commonly caught sport fish this week with sixty nine percent of our boats catching an average of five fish per trip. Top dorado boat was Bill Collector with twenty (nine released) for Ivan Berry from Escondido, California & friends, who also released a striped marlin. Our total dorado count was 309 fish. There were a few tuna catches this week by crews that were specifically targeting them at the angler’s request. Only a few boats caught with Pisces Rebecca having the best catch of thirty five schools size fish at San Jaime for Brian Medinski & friends from Toronto, Canada. A total of 49 fish were caught amongst five boats. Pisces La Brisa caught two wahoo for Michael Iwanicki off of Pescadero as well as a couple of dorado and a needlefish. The only other catches were inshore of small skipjack.
LOCATION: Everything is on the Pacific – Old Lighthouse to Golden Gate.
WEATHER CONDITIONS: Beautiful, clear skies, sunny days, mostly calm seas.
AVERAGE WATER TEMP: 74 F
BEST LURES: Live caballito, green colors, red/orange colors