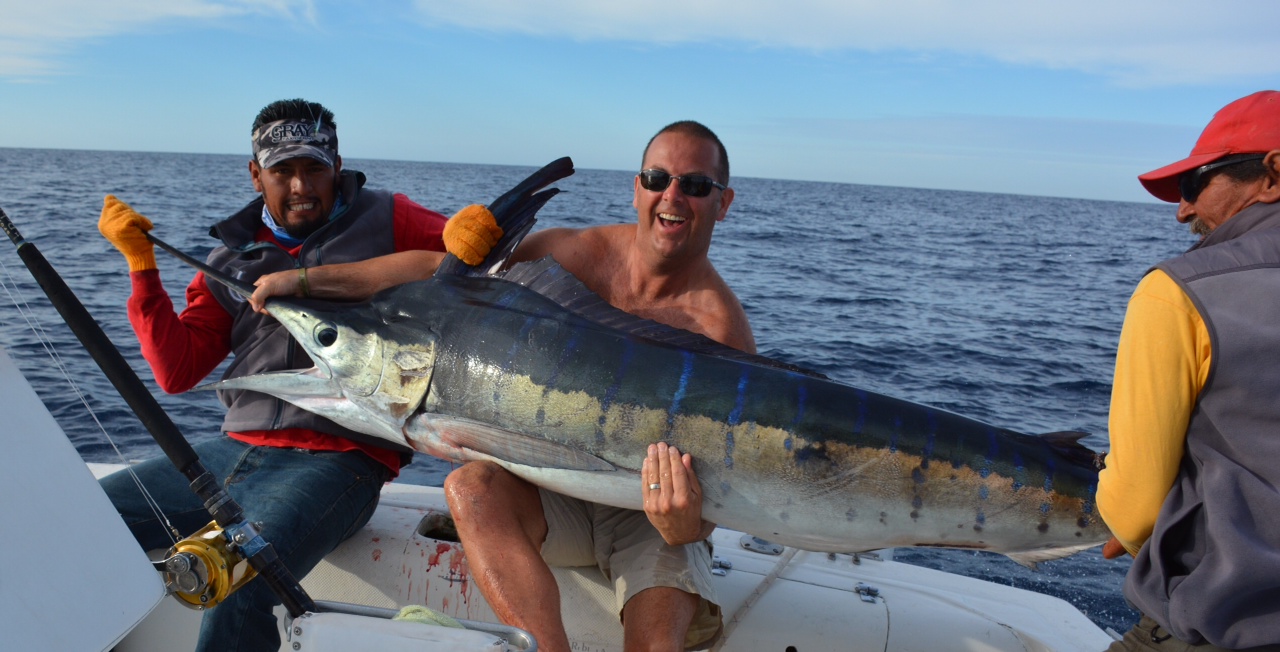 Paul Boswell from Canada releases a nice striper aboard Rebecca

BILLFISH: We had a pretty decent week, even though numbers are a bit lower this report, but this was directly linked to bad weather on February 5th, when we had cloudy skies, wind & choppy seas, causing even our most productive boats to come back with nothing, nevertheless other days we saw some really good fishing. The most exciting catch this week was of a 60 LB short bill spearfish, caught and released aboard Pisces Petrolero on February 1st by Shari Miller from Peoria, Arizona. The unexpected catch took place sixteen miles outside of Santa Maria Bay on the Cortez side when the fish took a trolled “guacamaya” colored lure & was quickly let go. This is an extremely rare catch; usually no more than two a year are caught for the entire Cabo fleet. Striped marlin catches remained good at Golden Gate as long weather allowed the boats to get up there, on some days it was very windy and cold meaning that most anglers simply did not want to get beaten up to  get there. Nevertheless we had some great catches- the Adams family from Encinitas, California had a great day aboard Pisces Yahoo, releasing five striped marlin between 100 and 170 lbs., at Golden Gate on February 6th, using live mackerel for bait, making these guys our anglers of the week. Deanna Beasley from Austin, Texas fishing with friends had a great time releasing four marlin & boating one dorado for the dinner table aboard Pisces La Brisa. The 31 ft. Bertram Tracy Ann also achieved a high catch day with four striped marlin for Curtis Matthew & Frank Ulhorn from South Carolina.  Sixty percent of other boats caught between one and three striped marlin each, giving us a total of 71 released plus the spearfish.

OTHER SPECIES: Although we still have tuna and dorado around, the numbers arestarting to decrease, that said, we do expect another strong tuna run right around April. Only a half dozen boats found tuna this week & when found it was feast or famine, they eight caught one or two or did the opposite and caught fifteen to twenty five. Sizes were small at 15 to 25 lbs. slightly more boats caught dorado, giving us a catch rate of twenty percent, but the catches were of a single fish in the 15 to 30 lb. class.  Pisces Tracy Ann caught an 80 lb. mako shark for Parker Jones from Raleigh, North Carolina and one other mako was released for the fleet. The inshore fishing is starting to pick up and we saw some red snapper, yellowtail, bonita, skipjack & sierra in moderate numbers.

LOCATION: Pacific, Golden Gate, inshore Light House to Gaspareno.
WEATHER CONDITIONS: Feels like winter has arrived in Cabo, some chilly evenings, a couple of windy days and rough seas, however, at the end of this report, we had returned to our normal beautiful weather.
AVERAGE WATER TEMP: 71-72 F
BEST LURES: Live mackerel, green/orange lures, cedar plugs