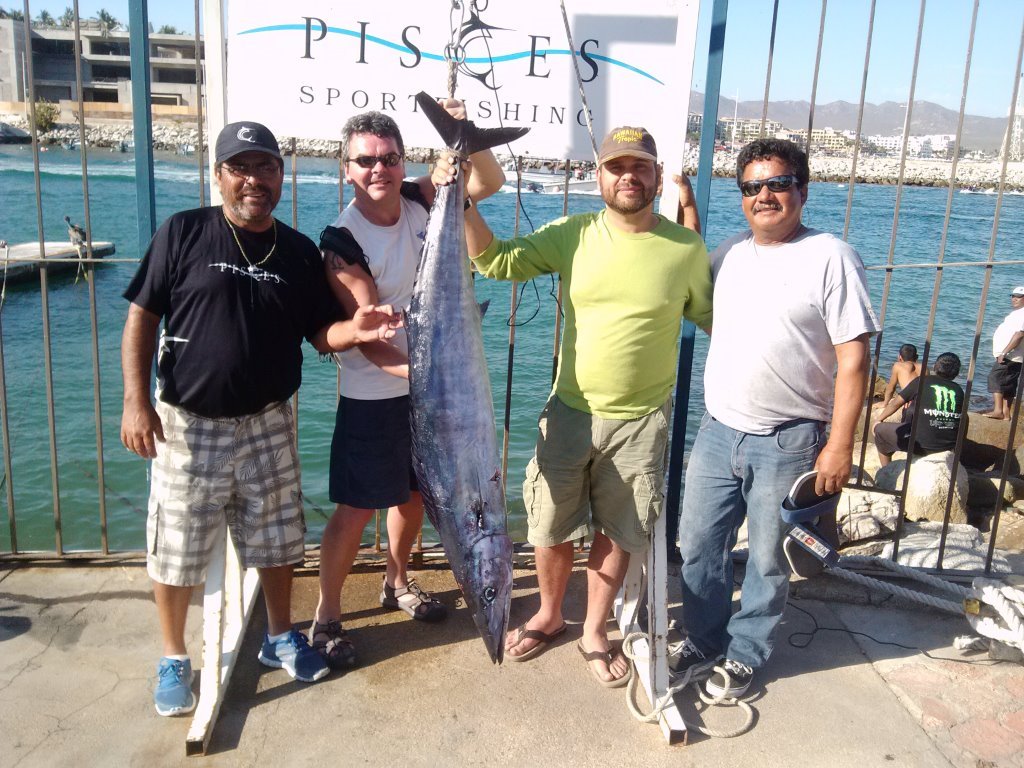 BILLFISH: We usually approach March with some trepidation as in past years, this signifies cooler water & poor billfish catches, however, that is not the case this year, so far. Water temperatures are holding firm right around 72 F & the awaited winter came and went without it ever really happening. Striped marlin catches continue to be very good with the only thing hampering catches windy weather on a few days, which discouraged anglers to tough it out past Cabo Falso, which is a shame, because once they reached Golden Gate it was much calmer. Nevertheless quite a few groups opted to not confront the wind and stayed around the shoreline fishing for smaller game. Pisces Bill Collecter was again the number one boat for most marlin in a day, for releasing seven for Steven & Kathy Fix, Darcy Reid & Cindy & Dave Nelson – they used a combination of sardines & caballito at Golden Gate. Not far behind was the 31ft Bertram Tracy Ann, with six marlin in the 130 to 150 lb. class for Alexander Simkas on February 22nd. This same boat released five marlin the day before for Jason Moore, Jay Carson & Cliff Montgomery as did Pisces La Brisa, for lone angler Chic McSherry from Scotland, who commented that some of his fish were extremely tough & athletic.  These were the better catches this week, with other boats releasing between one and four fish, almost exclusively at Golden Gate, though a few stray stripers were picked up by boats concentrating on small game. Sixty eight percent of our boat caught marlin this week, giving us a total of 105 fish, with all but one released. 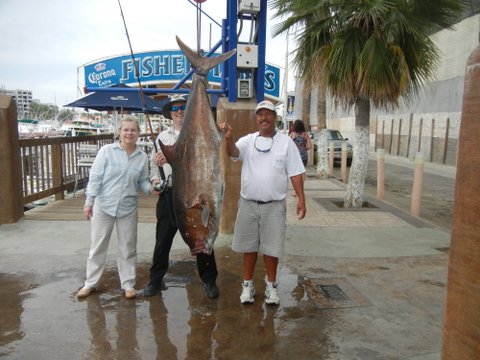 OTHER SPECIES: Dorado catches dwindled right down, which is normal for this time of year. A few were picked up by trolling but tended to be incidental catches, with the exception of Pisces Rebecca, who deliberately went looking for them on the Cortez side and managed to catch two, plus some skipjacks and needle fish. Only eight percent of our charters managed to find dorado. Once again some big sharks were caught, complimenting already good fishing days for some anglers.  William Babb from Texas released a 140 lb. thresher shark, caught on a live mackerel as well as three striped marlin aboard Pisces Rebecca on February 22nd.  Bernie Graham from North Bay, Canada had a fabulous day aboard the 35 ft. Cabo, Listo, releasing a 145 lb. thresher shark & a striped marlin, with a bonus 25 lb. wahoo for the table.  This was not the only wahoo, Scottish angler Chic McSherry landed a beautiful 60 lb. wahoo, which he said put up zero fight but came straight to the boat on February 23rd as he fished aboard Pisces Valerie – he also released three striped marlin this same day. We had one other shark; an 80 lb. mako released aboard the 28 ft. Uniflite Adriana. One big story this week was a monster amberjack that reportedly weighed 150 lbs. caught by Craig Heiges from New York, aboard a local charter boat, Edith V, with captain Vicente (not a Pisces boat). Craig took 45 minutes to reel in the huge fish, the largest we have ever seen in Cabo, on 20 lb. tackle. At the main dock the fished weighed 150 lbs., but there are doubts about the accuracy of the scale – the all tackle world record is 156 lbs. 13 oz., so this one was just a little shy, it could possibly be a 20 lb. test class record though and is definitely a Mexican record. Any potential world records have to be weighed on a certified scale by an IGFA rep, neither of which was done leaving the status of this fish in doubt. Nevertheless an incredible achievement, well done Craig! Inshore boats saw action on skipjacks, sierra, jack crevalle, red snapper & a few roosters & needle fish.
WEATHER CONDITIONS: Partly cloudy, seas, calm on Cortez, some moderate to rough seas on the Pacific.
LOCATION: Golden Gate, Old Lighthouse to Migrino
AVERAGE WATER TEMP: 71-72 F
BEST LURES: live bait, hoochis, and feathers
Share this article