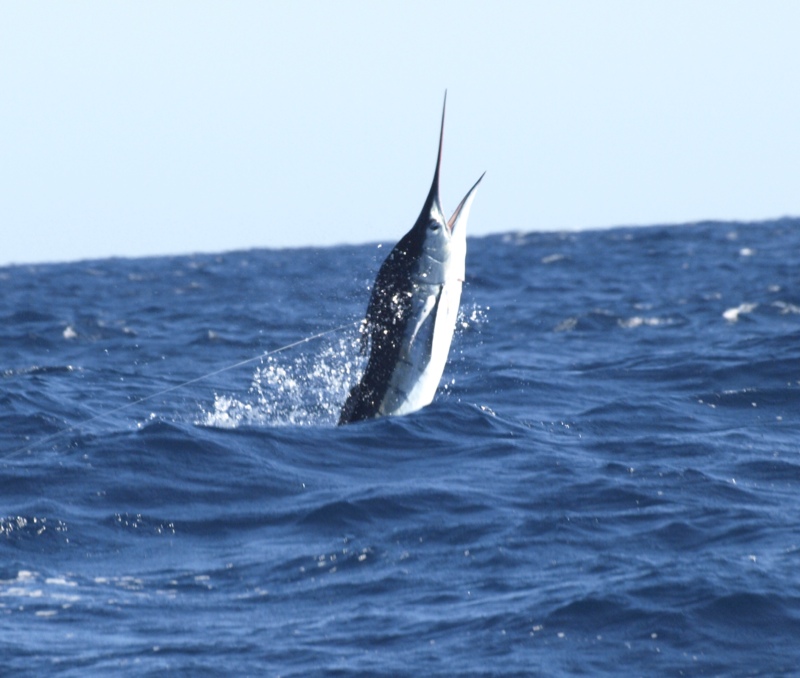 BILLFISH: This week’s report covers a two week period as we were at a boat show last week and couldn’t get this out – the good news is that we have had some superb fishing. The stripe marlin bit was particularly good, even though we did have a few boats “skunked” right around full moon, but on the other hand we had a couple of boats that released as many as ten in a day. Top catch was Pisces Bill Collector, a 32 ft. Cabo Express, with ten marlin released along with a 175 lb. thresher shark for Mark Chiavetta from San Jose, California. The other top boat was also a Cabo, this time a 35 ft. flybridge, Listo, which also released ten striped marlin for Barlet Sequeira, Jason & Jennifer Hammonds, Kasandra Hutson & Kelly & Matt Thomas, all from Houston. The first week of this report, boats switched from the Pacific to the 11.50 spot on the Cortez side, mainly due to some gusty winds on the Pacific, but as we write this Golden Gate on the Pacific is again, the location of choice for most boats willing to go up the coast and not settle for close by small game. The boats are using mixed live bait, with mackerel their first choice, but also taking along caballito & sardines. Catches ranged from one to ten fish with many boats in the four, five & six fish category. Seventy on percent of our boats caught striped marlin this week, giving us a total catch of 229 stripers, with all but one released.
OTHERS SPECIES: As mentioned in our fish report header, ninety three percent of our charters caught fish of some type and even though marlin was the most likely catch we still had several boats that did quite well on tuna. Pisces 31ft Bertram, Tracy Ann, always seems to make the fish report – this week she had more tuna than anybody else, as this crew don’t mind going the extra mile, sometimes traveling 40 miles to where they think they will find tuna -this is exactly what they did for Dennis Albin from Washington and ended up catching him & John Lodrige 29 tuna up to 20 lbs. as well as releasing a striped marlin. Just twelve percent of our charters found tuna and generally they were far out, twenty five to forty miles, with catches of one to fifteen fish the norm. Dorado catches were slightly slower with eleven percent of boats hooking these, generally when trolling for marlin, the difference here though, was that when found catches were rarely more than one or two fish. We are still seeing lots of sharks them most we can remember in a decade. Hunters Hoshiko from San Diego hooked an approximately 110 lb. thresher shark & released a smaller hammerhead and a striped marlin.  A couple of small mako sharks were also released by the fleet. Inshore thirty two percent of our boats caught sierra, bonita, skipjacks , needle fish, some roosters and the odd yellowtail.
WEATHER CONDITIONS: Partly cloudy skies, warm, seas somewhat choppy in the afternoons, some whitecaps on the Pacific when windy.
LOCATION: Golden Gate, 11.50 spot, 20-40 miles off lighthouse, inshore near lighthouse & migrino.
AVERAGE WATER TEMP: 72 F
BEST LURES: Live mackerel, sardines, caballito, cedar plugs, green colored lures