What an impressive week of fishing, with almost 100% success rate from our crews! Only 5 out of 107 boats did not catch fish this week, and those that did find luck outdid themselves, with numerous catches and different species brought in per boat. The billfish are back with a bang, mainly striped and some blues with sailfish showing up again as well; dorado numbers continue strong and tuna have diminished only a bit. Other species caught have been wahoo, rooster fish and amberjack, with a few scattered sharks landed too.

The week began a bit slow in comparison with the fishing experienced on Thursday and on through the weekend. By “slow” I’m talking one striped marlin, three yellowfin tuna and one blue marlin, which is what 55ft Flora T caught on November 5th, with anglers from Columbus, Georgia. This of course is only in comparison to the 16 dorado caught on Billcollector or the 8 marlin and 8 dorado caught by the Rebecca later on in the week. and by “slow” I still mean FANTASTIC! 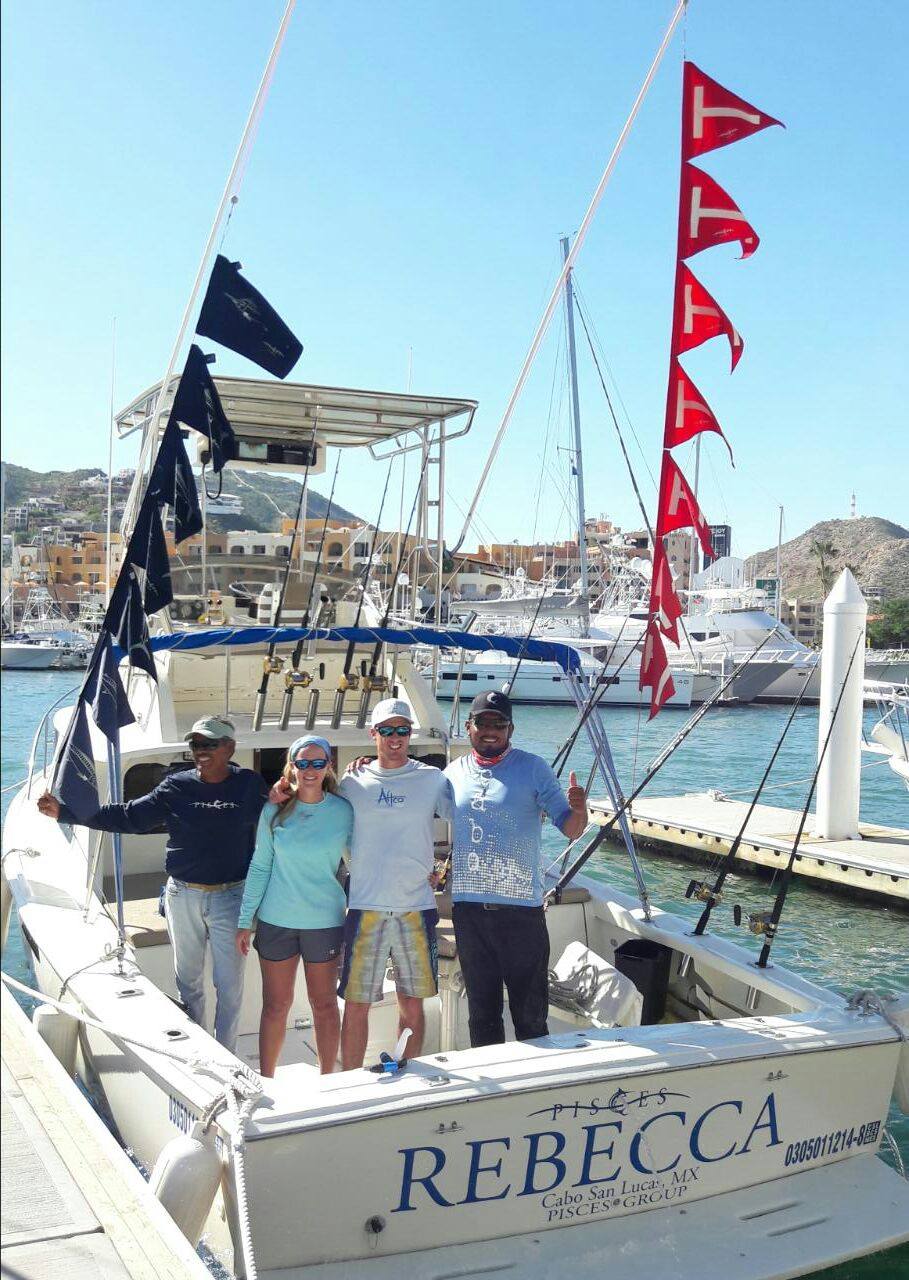 Always happy to see this many release flags! 8 marlin released this day.

The Flora T’s striped marlin was about 80 lbs, and was landed on mackerel bait out at Pozo Cota. Also landed there were the three yellowfin, which ranged in weight from 10 to 30 lbs.  The blue marlin hit on a clown lure and was a decent size, about 420 lbs approximately. Both marlin were released. Other catches by Flora T this week included ten dorado, of approximately 10 to 15 lbs each, which landed on feather lures, as well as three skipjacks. All fish were landed at the Antena area by anglers from Wisconsin.

The 31ft Rebecca had a similar catch the next day, with two striped marlin, one blue marlin and four yellowfin tuna caught. All marlin were released and hit on mackerel bait. The stripers were about 100 lbs each, while the blue was almost at 200 lbs. The yellowfin were football sized and hit on cedar plugs. All fish were caught out at the 11.50 Spot.A great day for anglers from Lufkin, TX. The Rebecca found luck again at the 11.50 later on in the week, on November 9th, anglers from New York caught and released 8 striped marlin as well as 8 yellowfin tuna. I happened to be on the dock this day and talk to the crew as they filleted the tuna. Luis Cota, the deckhand, told me they had actually seen and tried to bait 16 marlin but that 8 got away! Still, pretty amazing day with the 8 marlin that stuck. All weighed between 100 and 120 lbs and hit on mackerel bait. The tuna were caught on cedar plugs and feathers and weighed between 10, 15 and 40 lbs.

60ft Shambala, captained by Benito Agundez, also kept herself busy this week, with three striped marlin and one sailfish caught by anglers Conor and Wud Pocinwong from Washington State. The marlin weighed approximately 90 to 110 lbs and hit on caballito bait out at La Herradura. The sailfish was about 80 lbs and was released along with the marlin. Earlier on in the week, the Shambala also found luck with small game fish: five dorado, two rooster fish and one amberjack all caught another day out at Gaspare?o by anglers from Richmond, TX.  The dorado were caught on feather lures and weighed around 15 to 20 lbs each. The roosters, which were released, were also between 15 and 20 lbs and hit on mackerel bait, along with the amberjack (released), which was about 20 lbs. 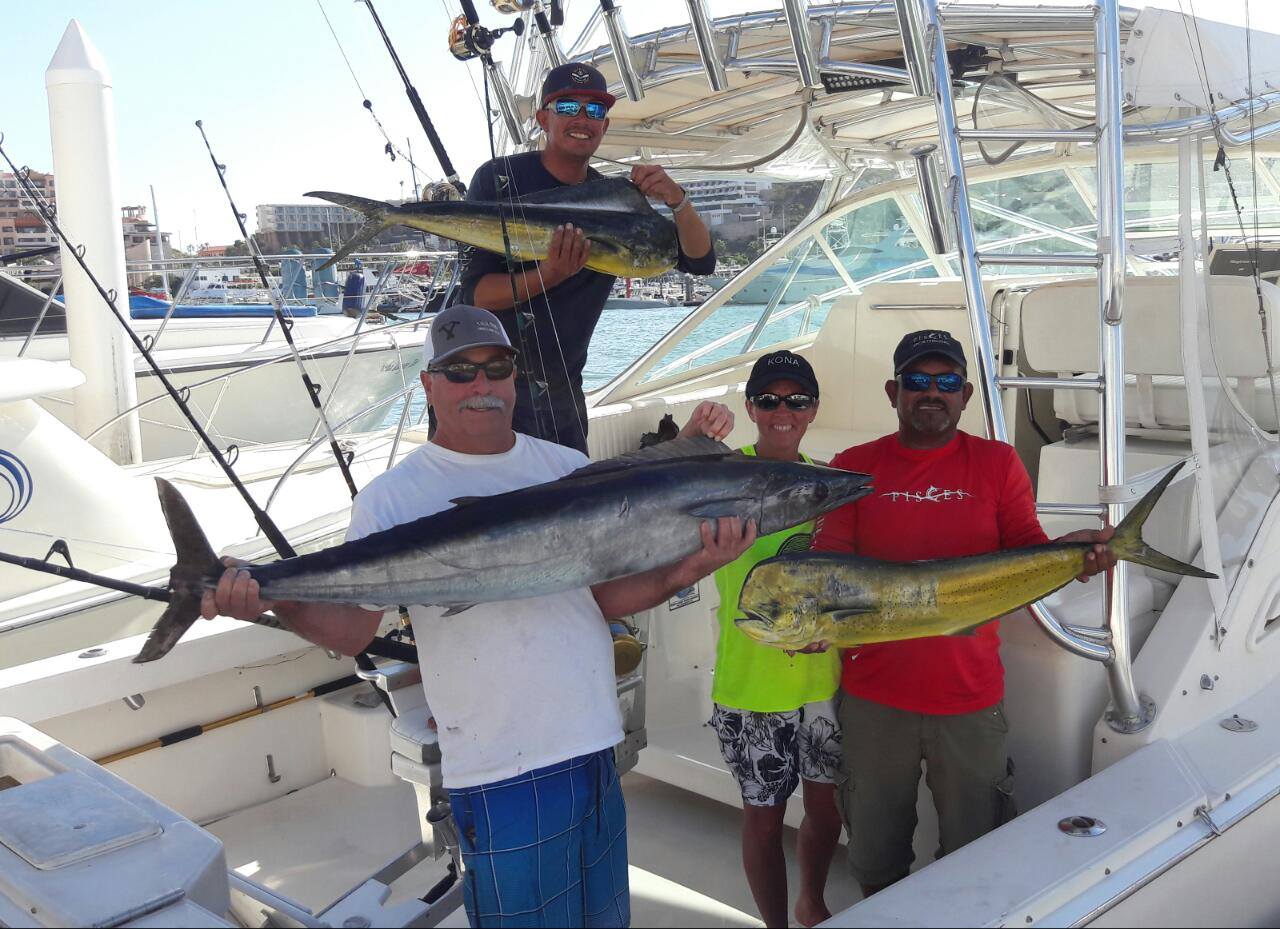 And what about our 31 ft Ruthless, who caught the most marlin out of any boat this week on Saturday as well. 14 stripers around 100, 120 and 140 lbs each (All released) and even one 110 lbs sailfish. The fish were al caught on mackerel bait out at the 11.50 Spot and released by anglers Dan Daegling, John Miller and Larry Wolfrey from CO. The Ruthless had another spectacular marlin day again, catching 10 striped marlin, all released, weighing about 90 to 120 lbs each, which were caught on mackerel bait and green or yellow lures out at La Herradura by anglers Roy and Tom Hosaka and Doug Ito from CA.

As for other catches the 35 ft Valerie was our top dorado boat this week, with 19 dorado in one day (many released). The fish ranged from 10 to 12 lbs each and were caught by anglers from Oregon out at Gaspare?o on lures: feathers, hoochi, and green/blue.They also landed a small grouper of about 10 lbs on mackerel bait out at Pozo Cota. 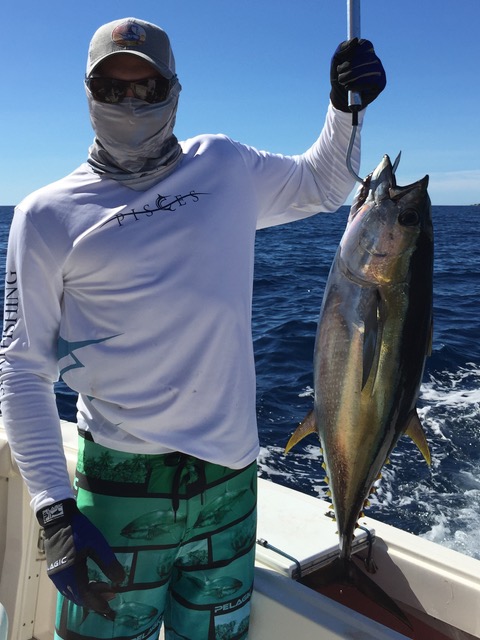 35 ft Knot Workin and anglers from Minnesota also had some fun small game catches, with four dorado of about 25 lbs each that hit on rapala lures at Cabeza Ballena along with a small hammerhead shark that landed on mackerel bait and was released. Five yellowfin tuna were also landed, that ranged in size from 10 to 25 lbs each and hit on  hoochi lures and caught with the kite out at the Old Lighthouse.

Pisces boats caught a total of 583 fish this week, with 175 being billfish, 369 being dorado and 75 being tuna. With all catch limits respected and all billfish released.