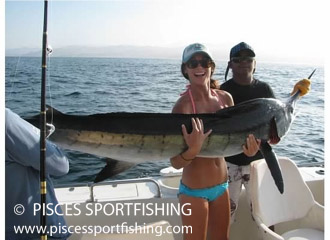 BILLFISH: It was great to finally have anglers around the marina in more than a trickle and thankfully the fishing did not disappoint with multiple marlin catches and good amounts of smaller game.  Andrea got us off to a good start, when the crew helped Mark and his team Sasquatch, from Washington, catch and release four striped marlin and boat a dorado on October 18th, whilst La Brisa followed up with three marlin releases this same day. James Jr and friends, from El Paso, Texas entered the Los Cabos Billfish Tournament aboard Attitude Adjustment and did extremely well to catch two blue marlin the same day at Destiladeras, unfortunately though, they were doubtful they would make the minimum weight of 300 lbs., estimating the fish at 220 and 270 lbs.  Respectively, which meant they went back into the water to put on a few more pounds for next year.  La Brisa with Argentine anglers on board, had the most unusual catch, by way of three local fishermen whose panga had broken down and drifted 14 miles -thanks to the sharp eyes of deckhand Fernando Noyola a tragedy was averted and they were towed back to port. Manuel from Cancun was out aboard C Rod during the Bisbee and had the same situation as Attitude Adjustment, they got the fish on, but they weren’t big enough – they released a 250 lb. blue marlin and a striped marlin the same day (Manuel you should have entered the released division like we suggested).  Pisces Valerie had Florida angler Roger on board on October 22nd who was fortunate to catch and release a blue marlin as well as a tuna and a couple of dorado. Attitude Adjustment had their third blue marlin of the week on October 23rd, this one estimated just shy of the 300 lb. qualifying tournament weight, at approximately 280 lbs., for Trent from Tomball, Texas.  Pisces Sportfishing anglers caught a total of 74 billfish this week, consisting of 63 striped marlin, 6 blue marlin and 5 sailfish. 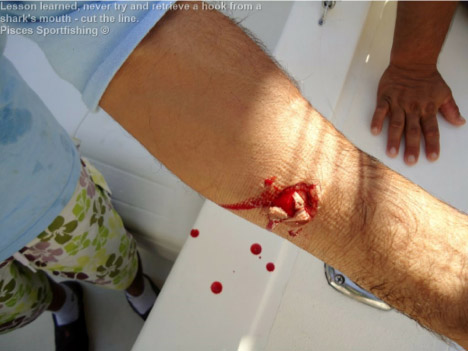 OTHER SPECIES: Dorado could be counted on most days to keep fishermen busy as they reeled in fish up to 30 lbs., with as many as eight being caught per boat.  The best place to find dorado was on the Pacific between Los Arcos and Migrino.  Roger from Inverness, Florida got a bit too much excitement on his second day out aboard Valerie they hooked a mako shark that the captain Roberto estimated to be 200 lbs., they wanted to release it and usually would cut the line as close to the hook as possible. Deckhand Salvador, known as “Pollo”, or chicken by the rest of the fleet, decided he didn’t want to lose a new, large hook, he thought the shark was stunned and reached down to try and free the hook – big mistake, the shark sprang into action and caught his arm, leaving him a souvenir of a tooth embedded in his forearm and a nasty cut.  Thankfully he was not seriously hurt but did new a few stitches. puts a whole new meaning on “chicken (pollo) of the sea and the shoe was definitely on the other foot!   Tuna catches were at thirteen percent but anglers were not seriously after them, nevertheless we did see some come in, with Mark C. having a nice catch of eight of them, with the largest 82 lbs.  Our Argentine group headed up by Mariano de la Rua had several days of great fishing and wanted to try inshore one day aboard Rebecca. They did well catching and releasing a couple of roosterfish, a red snapper, grouper, needlefish, five skipjacks and a couple of bonita.  We had several wahoo this week, with the largest 48 lbs. caught aboard Ruthless.