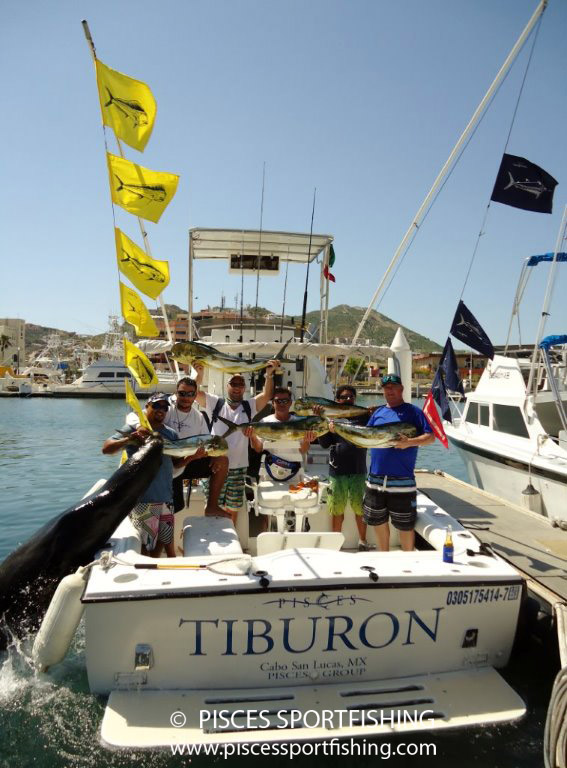 BILLFISH:  It’s great to finally have something to write about as boats gradually begin to get out fishing after the hurricane.  Fisherman are hardy, not easily deterred by and are slowly trickling back into Cabo to take advantage of the fabulous fishing that the month of October offers.  Some of the first anglers to visit Cabo, came all the way from Denmark; Henrik had fished all over the world trying to catch a blue marlin on what had been a 25 year mission, but all it took was for him to come to Cabo to realize his dream.  He released his 150 lb blue along with a sailfish at Punta Gorda, aboard Pisces La Brisa on October 9th.  Florida anglers Christopher, Kevin & Rich had an amazing time aboard our new 31 ft Bertram Tiburon on October 13th , when they released four striped marlin and caught fifteen dorado, of which five were released and one was stolen by Pancho the sea lion.  Jeffrey and Cassandra  from Eagan, Minnesota had a fabulous day aboard La Brisa, where they were kept busy catching and releasing two striped marlin and a sailfish, as well as reeling in five dorado.  Tiburon continued on a roll and managed to release a sailfish and catch sixteen dorado, for Jessie and Amanda, from Lafayette, Louisiana  at Los Arcos – but they ran into the same problem, a sea lion thief.  Basically the catches this week had the same pattern, usually a single striped marlin or sailfish, combined with a bunch of dorado.  Pisces anglers caught a total of 23 billfish this week consisting of 18 striped marlin, 1 blue marlin and 4 sailfish, all released except for the blue that died and one other striper that was kept. 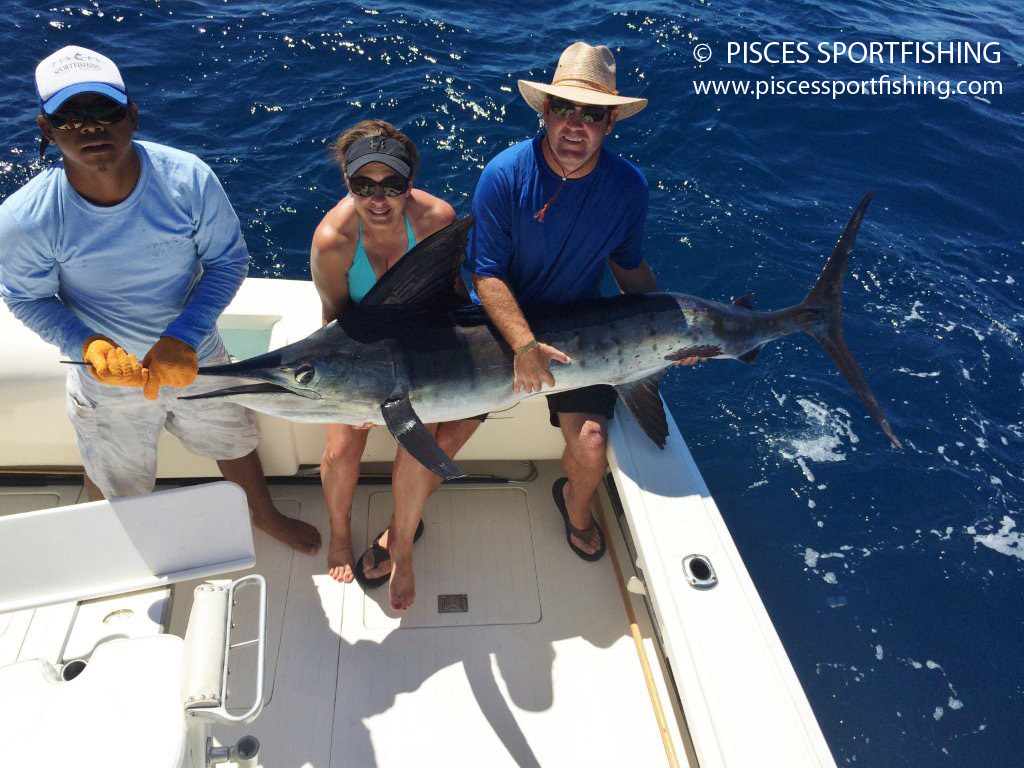 Ehrrrr, do you think you could let go of my nose now?

OTHER SPECIES:  Dorado was by far and away the top sportfish this week, with seventy nine percent of Pisces charters catching from one to seventeen fish in a day.  This is common for this time of year and also after a storm, when they congregate under floating debris.  The best catches of dorado were on the Pacific side from Los Arcos to Migrino and Pozo de Cota, with weights from 10 to 30 lbs.  They liked live caballito and sardines as well as a variety of lures – in other words they are hungry.  Tuna catches were slow, but that is because nobody is targeting them with dorado and billfish being so close.  There was one large one in the Los Cabos Billfish Tournament that weighed 180 lbs, so we know they are out there.  Cabolero was very fortunate to catch two wahoo for Edward and Williarm as well as thirteen dorado – size on the wahoo was not great at 20 lbs, but any size wahoo is tasty.  The only other catches we had were those of a few skipjacks.

WEATHER CONDITIONS:  Great; clear sunny skies, calm seas – one day there were whitecaps on the Pacific.