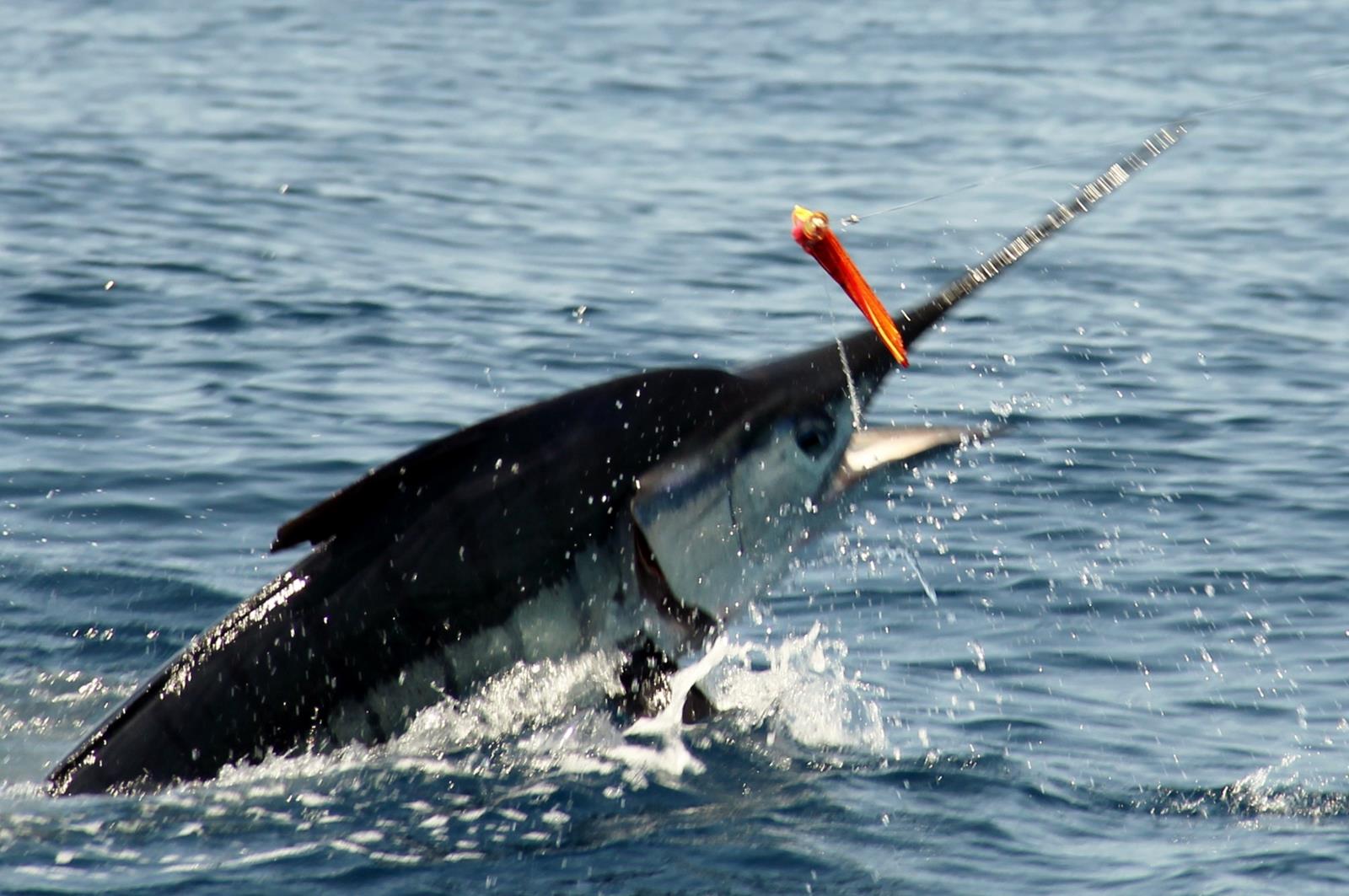 BILLFISH: The good thing this week was that we had a perfect score, every single boat we sent out caught something and more often than not, quite a lot of fish. This period striped marlin was the species most likely to be encountered by anglers aboard Pisces boats. We had great catches of other species too, but nevertheless more boats found marlin than anything else. As predicted in our previous fish report, the stacking up of boats off of the Old Lighthouse who were bottom fishing for the stripers, came to an end after three weeks, the fish spread out and charters are moving up the coast, mostly to Golden Gate to find them.  Catches ranged from one to three marlin per boat, with our top boat Pisces Yahoo, having a fabulous day releasing five striped marlin for Greg Stewart from Palin City, Alabama, who also caught a tuna, grouper and two dorado. Our little 28 ft. boat Adriana, really must have flown to be able to get to Golden Gate & back on a half day trip and release three striped marlin for Mike Flanagan from Pennsylvania. This same boat had three big stripers on January 8th, up to 200 LBS at La Bomba & Golden Gate for Joe Xumphonphakdy (yes we questioned that name too) & Megan Laube from New Jersey. It was nice to finally have some live mackerel available – striped marlins’ absolute favorite, improving the odds of hook ups. That said those boats that took caballito for bait also did well.  Sixty one percent of our boats caught marlin this week, giving us a total of forty eight fish, all released.

OTHER SPECIES: Marlin might have been the most frequent catch this week but for sheer numbers yellow fin tuna could not be beat. Our top tuna boat this week was Pisces Rebecca with an amazing catch of fifty fish up to 25 LBS, (many released) for Steve Turner from the aptly named Fishers, Indiana – he along with his friends also release a striped marlin. They fished 38 miles to the south of Cabo on January 10th. This same day Pisces Tracy Ann did not want to be left out, but they went to San Jaime where they were able to catch thirty tuna, two dorado and release a striped marlin for Daniel O’Connor & buddies from Australia.  Pisces Bill Collector went a long way out, forty miles from Lands End, to be able to catch thirty five tuna up to 30 LBS for Jo Ellen Jablonski & party from Illinois.  Forty seven percent of our charters caught tuna giving us a total count of 324 fish.  Dorado catches remain good, with forty one percent of boats catching between one and ten fish up to 25 LBS. One of the better catches was by George Leopold from Santa Fe, California aboard Pisces La Brisa, for ten fish caught at La Ballena on live mackerel and an assortment of lures.  The dorado are more spread out now, but generally were found along the coastline about a mile offshore between the Lighthouse and Golden Gate.  Several boats caught grouper up to 20 LBS as well as skipjacks and the odd sierra inshore. Just a couple of small wahoo were taken and the only other catch was that of a blue shark, a tiny 20 LB specimen, released aboard Adriana by Ken Kinslow from Oklahoma.
LOCATION: Pacific – Golden Gate, Margaritas, San Jaime, Migrino, 30- 40 miles south.
WEATHER: Perfect
AVERAGE WATER TEMP: Water is still warm at 74 F
BEST LURES: Live mackerel, live caballito, cedar plugs, green/black, petrolero