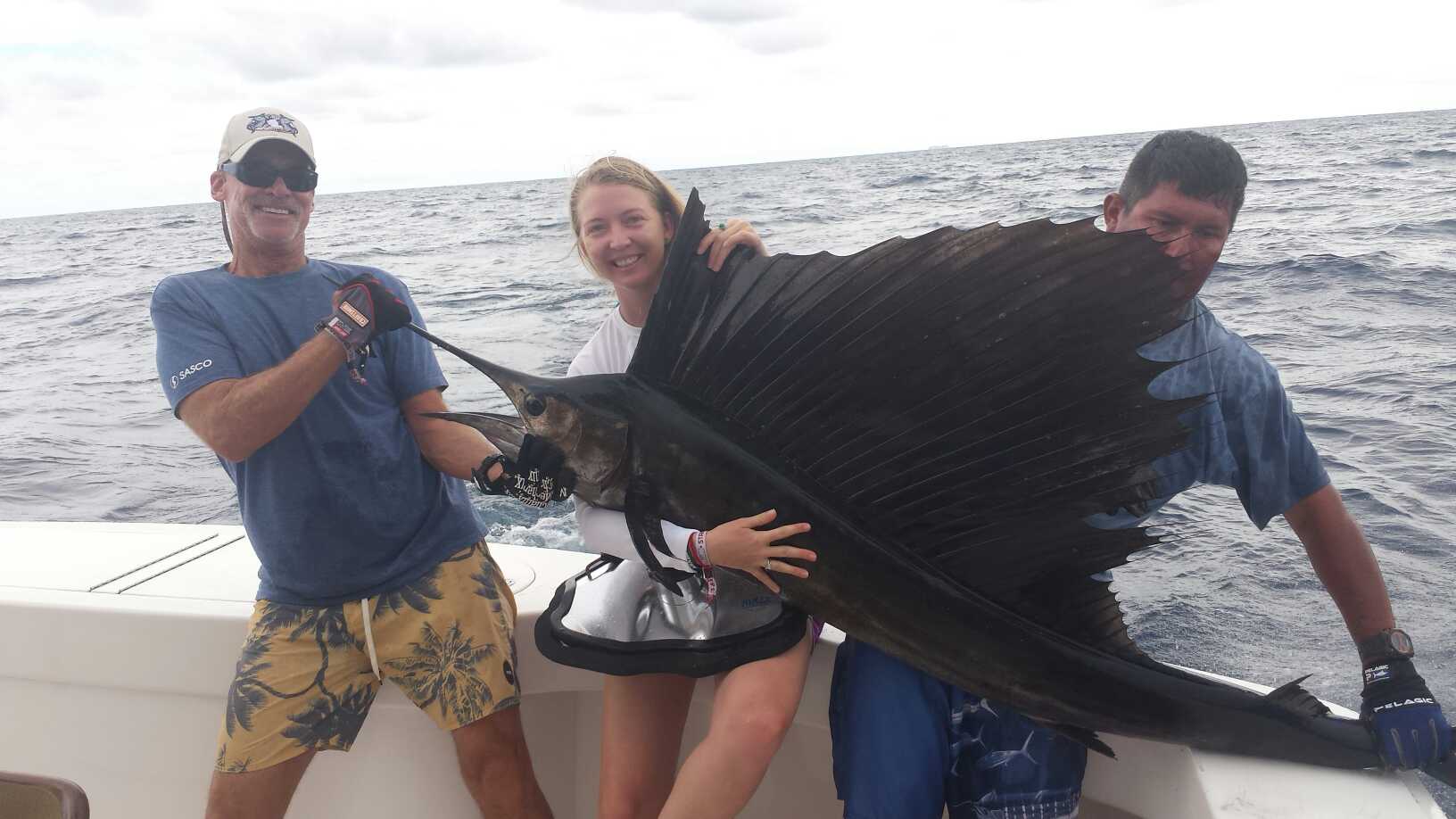 BILLFISH:  We had a big moon this week, which meant some tough fishing during the phase when it was full and the day leading up to it and just after, nevertheless when the fishing was on, it was red hot. Added to this were the abundant tuna catches which were a welcome bonus most days. We were again surprised by the number of blue marlin and sailfish, which combined, outnumbered the catches of striped marlin, something we have not seen in years.  Biggest blue marlin for us this week was a 350 lb’er released aboard Pisces 35 ft. Cabo Listo, by Bryan Brewer from Boston, Mass, just outside the Golden Gate, where he also released two striped marlin. Pisces Bill collector has been on a role recently and this week was no exception – they caught a blue marlin estimated at 250 lbs. plus a sailfish for Robert Click from Plano, Texas, followed by an estimated 280 lb. blue marlin, estimated 150 lb. striped marlin and a tuna on July 15th for Wilkes McCain also from Plano, Texas.  We have a new 31 ft. Bertram in the fleet, “Tiburon”, which sees Rosendo, former deckhand from the Valerie, now promoted to Captain, with Abraham Castro, son Julio (of Tracy Ann fame) as his deckhand, already doing well, with a 300 lb. blue marlin on 60 lb. test line and five tuna for Joe Spinella from Sacramento, CA on July 13th.  A couple of days later, the new boat got their second blue marlin of the week, smaller at around 210 lbs., nevertheless a good catch when added to three tuna for Jonathan and Laura Glover from East, Texas. July really should be called the month of the Texans, as they are here in force and catching a ton of fish.  Sean Low from Middleton (yes Texas) fished La Brita and caught 200 lb. blue marlin and a tuna for the table. Pisces Andrea had a similar size fish, taken on a guacamaya lure twenty eight miles out from Land’s End for Douglas Beyer, from Ohio. Kevin Christensen from Midland, Texas went out on Valerie and did well to release both a blue and striped marlin just five miles off of the Old Lighthouse.  Another new addition to the fleet 50 ft.  “Flora T” had a superb day on July 17th for Fritz Aldine from Austin, Texas, with a 280 lb. blue marlin released, a sailfish released, as well as a 45 lb. wahoo – definitely not released, thirty five miles out from the 210 spot. Ruthless was the top sailfish boat, with three released in a day for Phillip Hale, from Houston. Stripe marlin catches were usually of a single fish, but Bill Collector released two and caught ten tuna up to 111 lbs. for Ollie Oltmer from Belton, Texas – seems like the rebuild of her engines Bill Collector has been doing really well. A little over half of our boats caught billfish this week giving us a total of 11 blue marlin, 18 striped marlin and 17 sailfish. 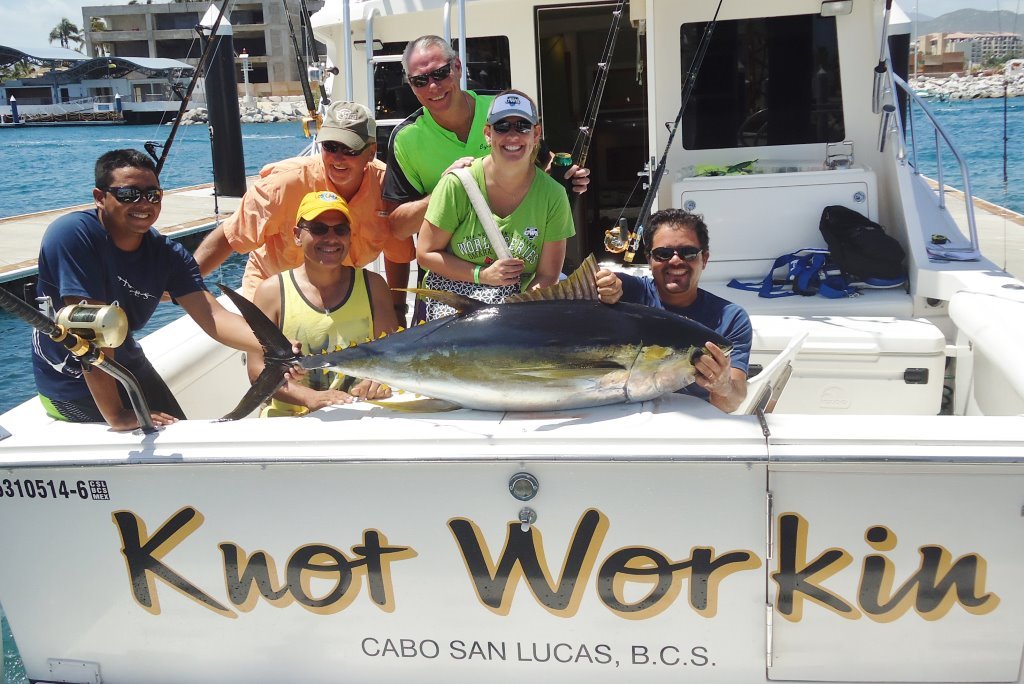 OTHER SPECIES: Boats were just as likely to encounter tuna as billfish this week in Cabo, but the difference was, when found the quantity of fish to be caught was much higher, giving us total catch of 227 fish. Catches ranged from one up to as many as twenty, as caught on Valerie by Jon Killough from Alabama. It was good to see some size on the tuna; twelve year old Ricky Earley from Bellair, Florida landed a 119 lb. yellowfin after it took a green and yellow lure, twenty seven miles out from the Lighthouse. La Brisa also had seven tuna up to 96 lbs. and C Rod a nice 103 lb. fish caught by Diana Melton from Houston. Another new addition to the fleet, a beautiful 35 ft. Cabo “Knot Workin”, likes to fish with kites for tuna and managed to land a 104 lb. fish for Chris Schmitz from Houston, but it was Bill Collector again to take the top spot with a 124 lbs. tuna for Phillip Brantingham from Newcastle, U.K. Dorado catches were on the slow side with just eight total caught for us, though some were sizeable in the 40-50 lb. class. It was a different story in Loreto though, where we heard reports of lone, massive dorado in the 60 to 100 lb. class (which would be an all tackle world record – waiting on the photos). Inshore there were a few grouper and jack crevalle. The panga Gloria caught and released ten roosterfish, with the largest at 40 lbs. for Bryce Rowland from New Zealand.
LOCATION: Between the 11.50 spot on the Cortez to Golden Gate on the Pacific – the tuna schools moved around a lot but were predominately on the Pacific.
WEATHER: Hot, humid with rainclouds threatening over the mountains, thought it only rained further up the Baja in La Paz and Loreto. Seas moderate.
AVERAGE WATER TEMP: Very warm 85-88 F
BEST LURES:  live caballito, cedar plugs, green colors, red/black, petrolero, guacamaya