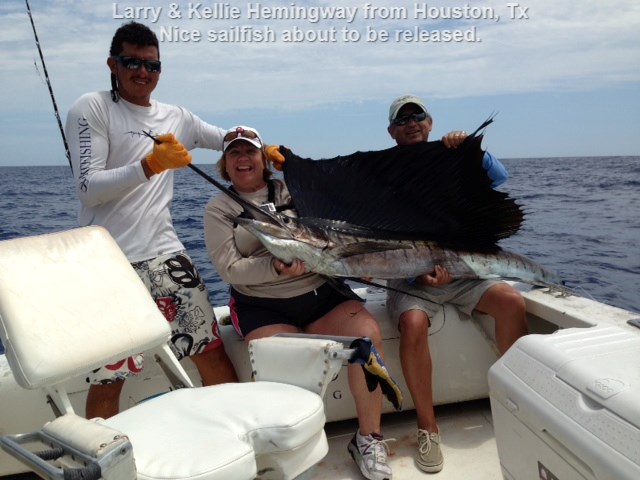 BILLFISH: This report covers the last two weeks as we were unable to get his out last week – but boy was the fishing good. The most unusual thing we saw this period was the amount of sailfish being caught, which have never before outnumbered marlin, but which have for the last couple of weeks. Besides a mix of billfish we saw great numbers on yellowfin tuna as well several wahoo and a few big dorado. Andrea our 28 ft. Uniflite had an outstanding week with some incredible catches – the best day for this boat was July 21st when Michael Long Sr. & Jr. were aboard with Michael Knize, all from Dallas. They caught an approximate 280 lb. blue marlin, a 250 lb. black marlin, a sailfish and 84 lb. tuna, 40  lb. dorado and lost a wahoo – now that’s a fantastic day! This same boat also had our largest billfish of the week, a blue marlin close to 400 lbs., which was released outside the 11.50 spot for New Zealand anglers Ross Whitmore & Brent Mitchell who also released a striped marlin.  The Wilder family from Taft, Texas also had a super busy day aboard Pisces Cabolero, releasing a 300 lbs. blue marlin and three sailfish, as well as landing a couple of yellowfin tuna up to 50 lbs. Our new 31 ft. Bertram, Tiburon, is already making a name for itself; on July 25th they had the Vega family aboard from Baja and caught a 200 lb. blue marlin, three sailfish, two tuna and a 40 lb. dorado. C Rod, Shambala & Yahoo all had blue marlin a little between 180 under 300 lbs., which they released. Bob & David Thompson from New York had an amazing day Pisces Valerie, catching & releasing eight sailfish and eleven yellowfin tuna. Striped marlin catches were rarely more than one fish, though there were a few boats that managed two in a day plus some smaller game. Pisces anglers caught a total of 98 billfish, consisting of 50 sailfish, 35 striped marlin, 12 blue marlin & 1 black marlin. All but five fish were released.Q2 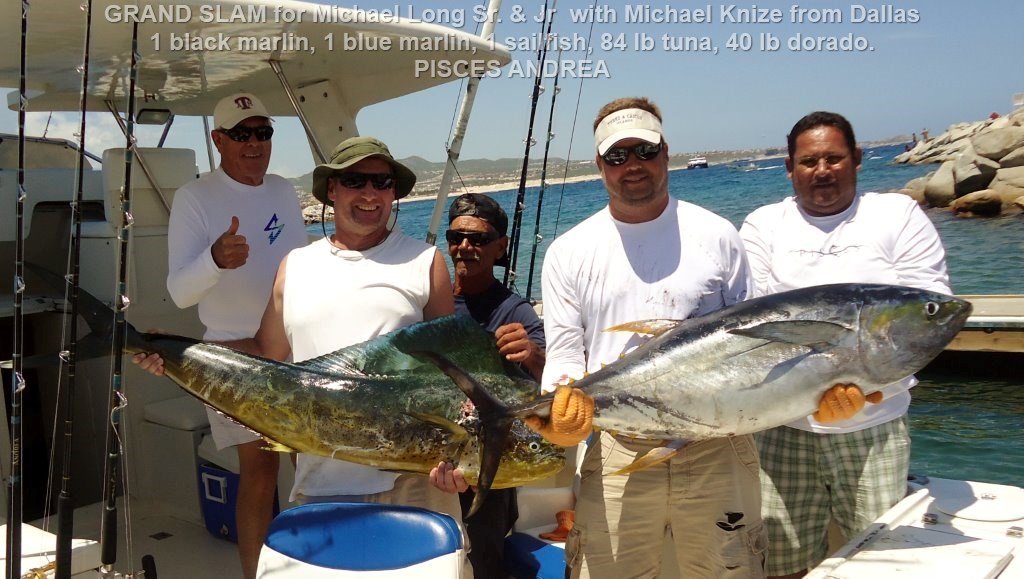 OTHERS SPECIES: We saw great numbers on yellowfin tuna this period giving us a total catch of 694 fish. Some of the tuna were of a good size, such as a 103 lb ‘er caught aboard C Rod, by Diana Melton from Houston, Texas who also went on, with friends, to catch a total of twenty fish, twenty miles out from the Herradura. Matt & Bob Trent from Oklahoma City caught twelve tuna aboard Andrea, with their top fish weighing 100 lbs.  On July 22nd Judy Durr from Farmer Ville, Louisiana caught seven tuna up to 95 lbs. as well as a striped marlin aboard Rebecca. Sixty four percent of our charters caught tuna, which when found, produced multiple hook ups. Dorado catches were considerably slower and tended to be picked up whilst trolling for billfish. The largest dorado was caught by John Carnes from Woodlands, Texas, weighing in at 65 lbs. aboard Yahoo. Mark Chiavetta from San Jose, California was fortunate to catch two wahoo 45 and 55 lbs. respectively aboard Bill Collector as well as land twenty tuna up to 100 lbs. and release a striped marlin. There were a few other wahoo as well as some bonita, roosterfish, plus one mako and one pilot shark.
WEATHER CONDITIONS: Hot, sunny, partly cloudy, port closed one day due to a local – storm that brought rains and sudden rough seas, which have now calmed.
LOCATION: Cabrillo, 11.50 spot and outside this location, Herradura, off of Land’s End, boats travelled 3 to 33 miles offshore.
AVERAGE WATER TEMP: 87-88 F
BEST LURES: Tigrillo (orange/black), guacamaya (orange/green/yellow), green & white, ballyhoo, caballito, cedar plugs.