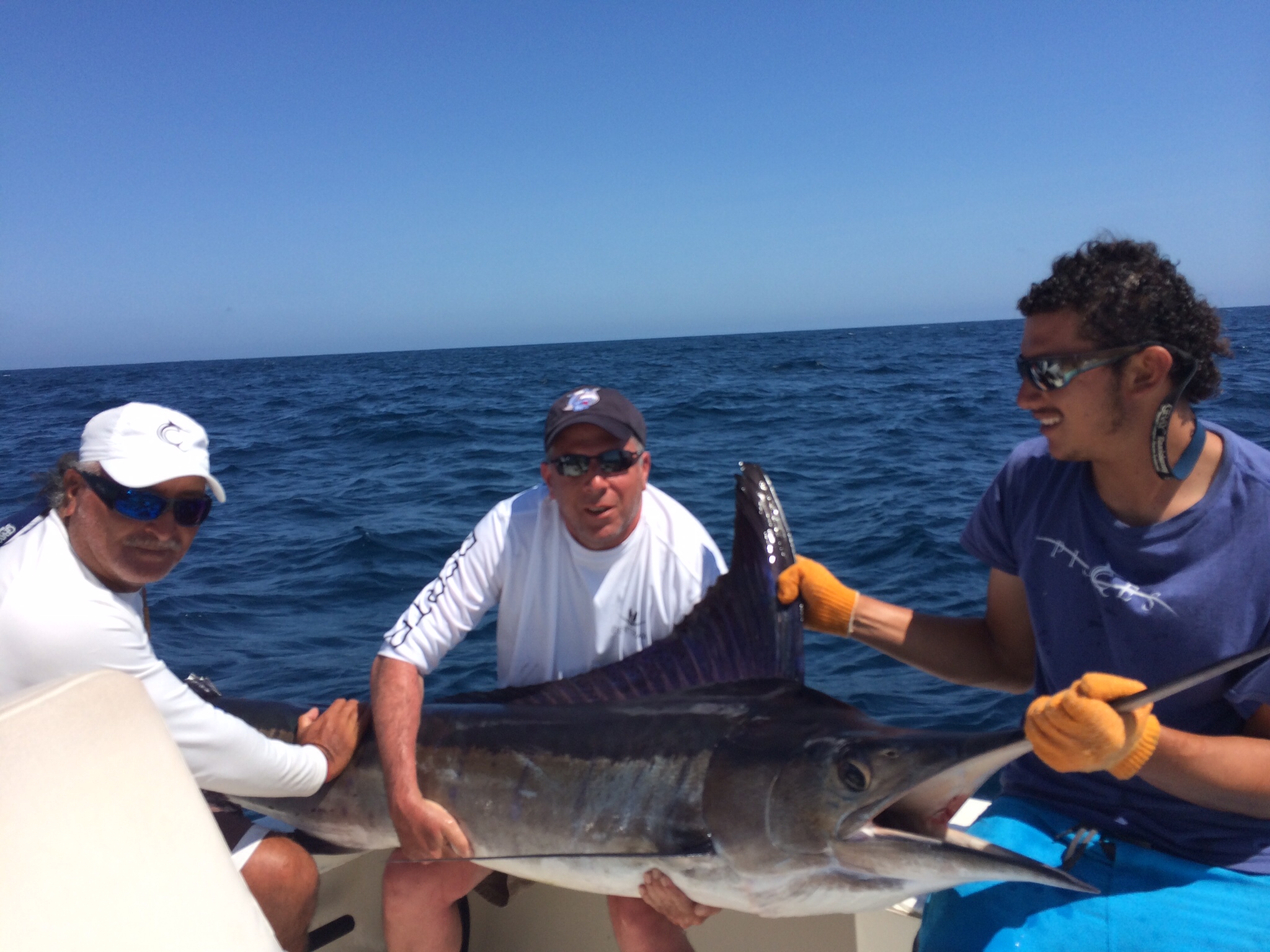 BILLFISH: This week we had some really good catches for mixed billfish with catch rates at a respectable rate. Full moon at the start of this period was believed to be the determining factor for some boats getting “skunked”, but nevertheless we are starting to see the variety of billfish caught in summer.  As we get into the hotter months we expect blue marlin to start showing up, generally smaller ones to begin with, then by the time we get to October tournament time is here and so are the really big fish. That said Pisces Ruthless had what would have been a tournament size fish on June 19th, caught by Joshua Wallace from Rathdrum, Idaho. This blue marlin was right around 300 lbs and took a green & yellow lure at the 11.50 spot. Fishing with Bryan Ward, he was lucky enough to release a small striped marlin too and boat six yellow fin tuna. This wasn’t the only blue; the following day encourage by Ruthless’ catch Pisces Valerie headed out to the same spot and using the same color lure also hooked a blue marlin, though smaller in size, which was released for Eddie Spetz from Menifee, California – six tuna were also boated by this angler. Pisces Cabolero fought a 140 lb swordfish for forty minutes after it took a like caballito off of the Old Lighthouse on June 17th, angler Jonathan Albro from Steamboat Springs, Colorado saw the fish sunning itself on the surface aided by the deckhand’s sharp eyes and thought he had one of the most sought after billfish, however the fish broke the line at the gaff and escaped; not to be discouraged though, the crew did manage to release a striped marlin for him. Pisces Listo had the best striped marlin day on June 14th with four caught and released up to 150 lbs and four dorado, nine miles out from Land’s End for Richard Gilleland& Sten Carr. Brandy Sandor from Salado, Texas had the largest sailfish of the week at 130 lbs aboard Rebecca as well as nice dorado. The crew on Pisces Bill Collector seem to have become somewhat shark experts, as every week they seem to catch them. On June 20th they had Jim Butcher & friends from Keller, Texas on board  when they released two pilot sharks & a sailfish  before boating five tuna at the Cabrillo sea mount. Seventy one percent of our boats caught billfish this week consisting of 57 striped marlin, 2 blue marlin & 5 sailfish.
OTHER SPECIES: Dorado catches are on the rise with some boats getting as many as eleven in a day. Weights ranged from a tiny 5 lbs (released) up to 43 lb, being found throughout the Los Cabos fishing areas from Golden Gate on the Pacific to Punta Gorda on the Cortez side. Dorado too like bait and green colored lures. Thirty four percent of our charters caught this species. Tuna catches were moderate due to the fact that they moved around a lot. You could catch a dozen one day and they would be gone the next. Most of the fish were school size, though Pisces new 35 ft Cabo, Knot working managed to hook a 140 lb’er with their kite, that unfortunately got off for Chris Chambless from Dallas, who had to settle for four smaller school size fish. Twenty six percent of our boats were able to catch tuna. One of the most unexpected catches this week was aboard Pisces La Brisa, by angler James Eimer from Louisville; he had already released  a striped marlin and they were on the way back in from the Pacific trolling along close to shore, when they came across a school of manta rays. A large manta took a ballyhoo that they had put out, which is very unusual. It took twenty minutes to bring to the boat to be released and was at least 100 lbs.
LOCATION: Pacific – Land’s End to Golden Gate; Sea of Cortez, 11.50 to Punta Gorda.
WEATHER: Big swells on Cortez at start of the week, sent boats to the Pacific, then whitecaps on the Pacific sent them back to the Cortez.
AVERAGE WATER TEMP:  81 F (the chart below shows the distinctive difference between Pacific and Cortez)