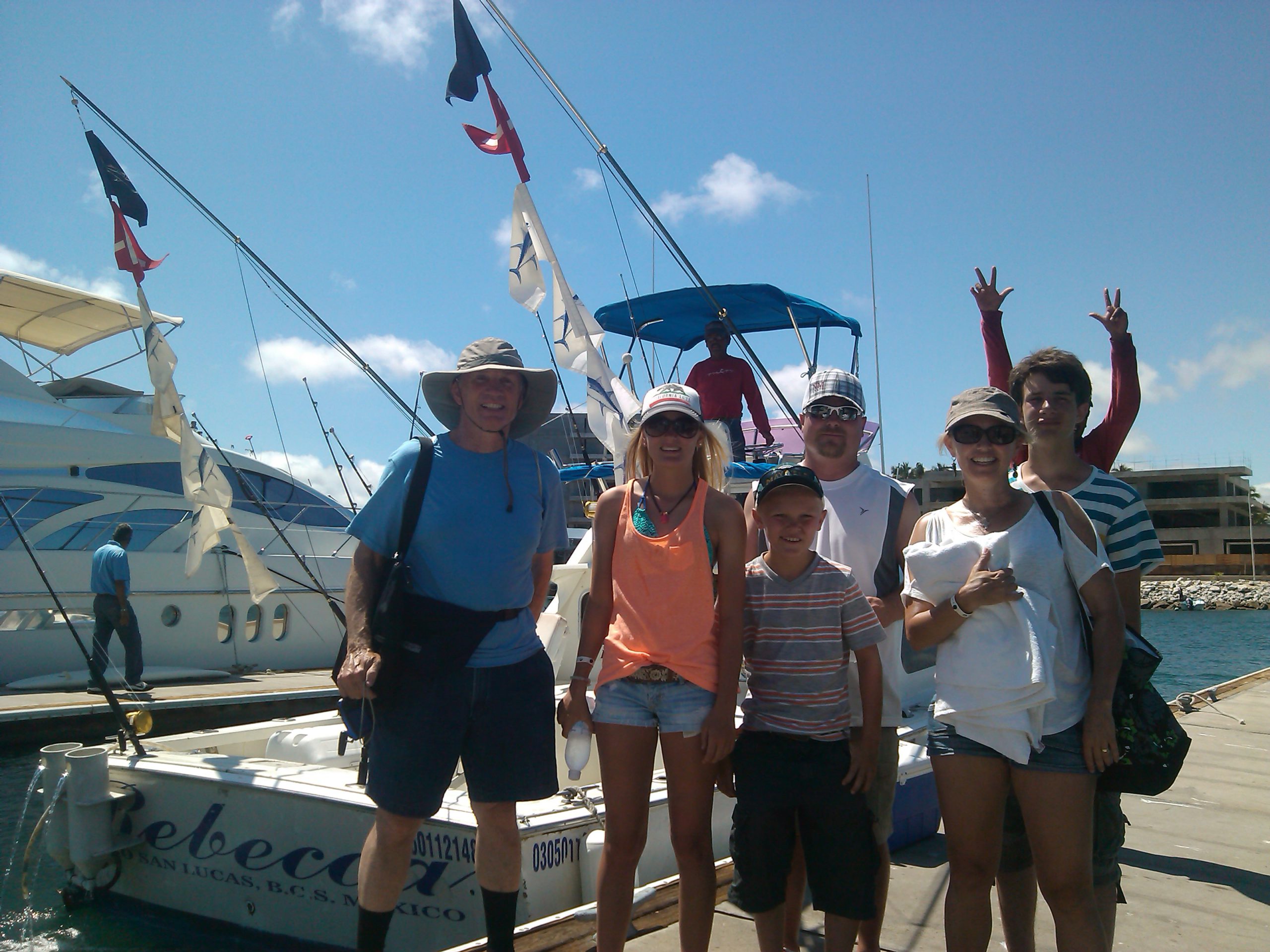 BILLFISH: What a great week in Cabo! Not only did we have our resident striped marlin but we also started to see some consistent blue marlin catches as well as the odd sailfish. First blue marlin of the week was caught by Lester Matlock, June 23rd, twenty eight miles out from the 11.50 the fish took a live caballito and was estimated at 184 lbs. before being released from the Pisces La Brisa. The next day out La Brisa headed to the Cabrillo area and managed to catch a blue marlin just past the 200 lb. mark and two sailfish for fifteen year old Kash Sisk from Emory, Texas who was fishing with his father Heath – sounds exhausting and it was, so they headed in and were back in port by 11.00 am. On June 24th Pisces 28 ft. Andrea went out to the Herrdura with Scott Marcantel from Louisiana on board who was shocked to get not one, but two blue marlin; both released, with the largest 350 lbs. and the smaller one 200 lbs. They also boated two tuna for the table. Heath & Kash Sisk were out again on La Brisa on June 24th  and released another blue marlin that was around 180 lbs. Pisces Andrea caught a smaller blue marlin, later in the week for Karl & Larry Mengers, from Alberta, Canada at the 11.50 spot after it took a live caballito.  Other members of the Mengers family, Mark, Mike & Burt, were out on Pisces Valerie this same day and released a 200 lb. blue marlin along with a striped marlin; both caught on an orange and black lure. Top striped marlin boat was Bill Collector for releasing four up to 120 lbs. plus a 100 lb. sailfish for Darrell Rosen & Geno Inman, between San Jaime and the Old Lighthouse. So it seems blue marlin were concentrated in the warmer waters of the Cortez while stripers were found on both the Pacific and the Cortez. Seventy nine percent of our boats caught billfish this week, breaking down into 68 striped marlin, 8 blue marlin and 7 sailfish. All but two fish were let go. 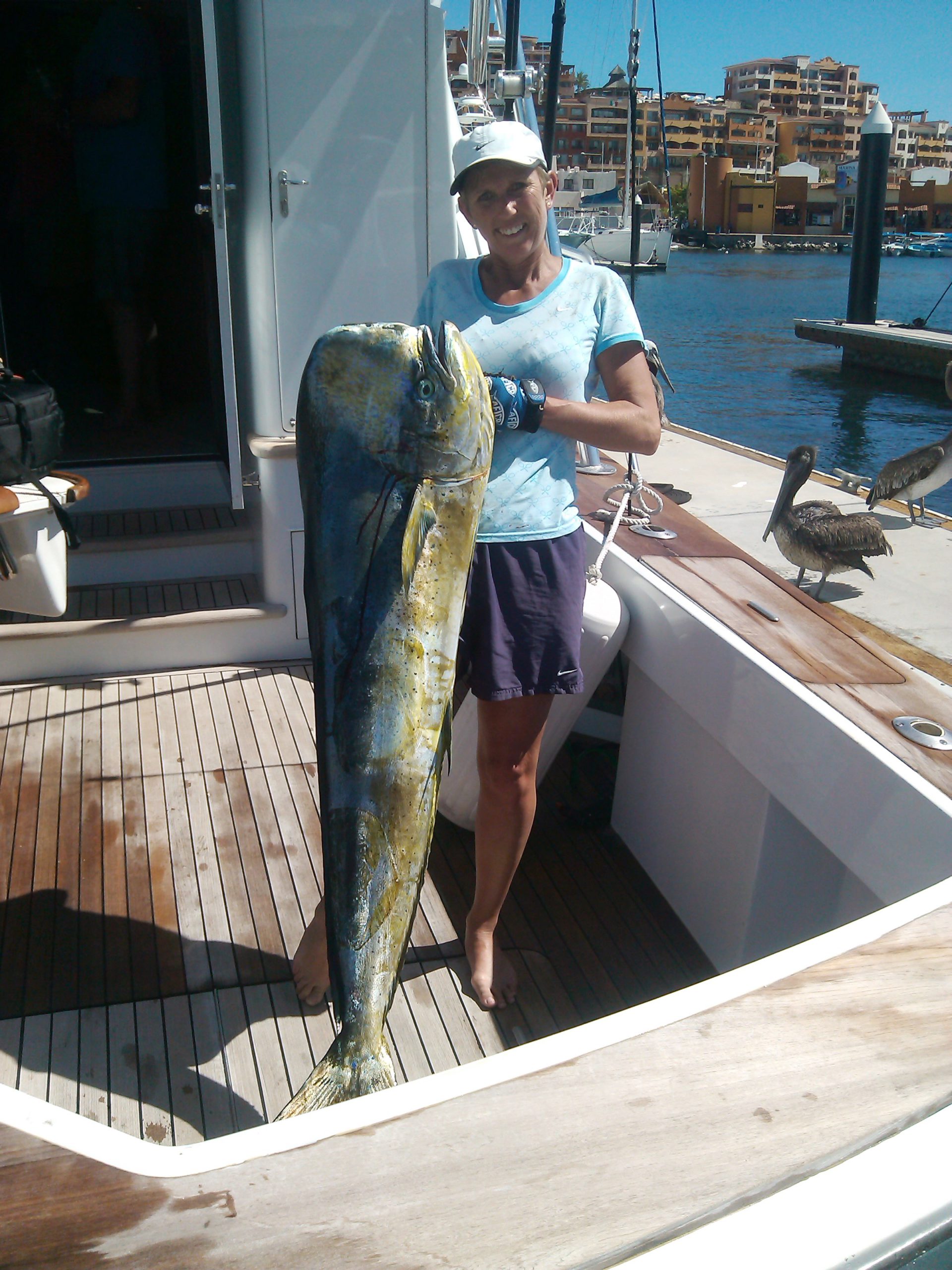 OTHER SPECIES: The billfish catches were good but parallel to these great catches took place on dorado and tuna. Although we didn’t see any tuna of impressive size there were plenty of fish in the 5 to 25 lb. class with the San Jaime & Pacific producing the best catches, though the odd one was picked up on the Cortez side too. Cedar plugs were the best option for tuna and our anglers caught a total of 131 fish with catches per boat ranging from one to twenty in a day. After marlin this was the second most abundant species. Dorado catches increased substantially this week not only in number but in size.  Some fish were just over 40 lbs and the largest of the week was 58 lbs. caught by lady angler Ingrid Carter from New Zealand, aboard Shambala – others ranged from 5 to 25 lbs. Panga Gloria had an outstanding day for our client James Elmer from Louisville, on June 21st when he caught a twelve dorado, twenty skipjacks and a 40 lb. roosterfish  – limits only were kept. Speaking of roosterfish, Pisces Bill Collector caught the biggest we’ve seen in a while, at 60 lbs. for Tim Patten off of shipwreck beach. We had a couple of pilot sharks with the largest estimated at 100 lbs. aboard the Yahoo.
WEATHER: We had some local rain for about an hour on Tuesday, with the Port getting close, despite most of the boat already being out fishing – they just came back a little earlier, which made the crews happy as the Mexico vs. Croatia game was on in the World Cup. Otherwise hot in the 90’s seas calm to moderate.
LOCATION; San Jaime for tuna, marlin were found from the Old Lighthouse to Punta Gorda, dorado closer to shore in the same area.
AVERGE WATER TEMP: 81 F
BEST LURES: live caballito, orange/black, green, cedar plugs.